Encyclopedia
In some egg-laying
Oviparity
Oviparous animals are animals that lay eggs, with little or no other embryonic development within the mother. This is the reproductive method of most fish, amphibians, reptiles, all birds, the monotremes, and most insects, some molluscs and arachnids....
animal
Animal
Animals are a major group of multicellular, eukaryotic organisms of the kingdom Animalia or Metazoa. Their body plan eventually becomes fixed as they develop, although some undergo a process of metamorphosis later on in their life. Most animals are motile, meaning they can move spontaneously and...
s, the egg tooth is a small, sharp, cranial protuberance used by offspring
Offspring
In biology, offspring is the product of reproduction, of a new organism produced by one or more parents.Collective offspring may be known as a brood or progeny in a more general way...
to break or tear through the egg's surface during hatching. It is present in most bird
Bird
Birds are feathered, winged, bipedal, endothermic , egg-laying, vertebrate animals. Around 10,000 living species and 188 families makes them the most speciose class of tetrapod vertebrates. They inhabit ecosystems across the globe, from the Arctic to the Antarctic. Extant birds range in size from...
s and reptile
Reptile
Reptiles are members of a class of air-breathing, ectothermic vertebrates which are characterized by laying shelled eggs , and having skin covered in scales and/or scutes. They are tetrapods, either having four limbs or being descended from four-limbed ancestors...
s, and similar structures exist in monotreme
Monotreme
Monotremes are mammals that lay eggs instead of giving birth to live young like marsupials and placental mammals...
s, Eleutherodactyl
Eleutherodactylus
Eleutherodactylus is a genus of frogs in the Leptodactylidae family. It is typically described as the largest vertebrate genus on Earth, with over 700 species...
frog
Frog
Frogs are amphibians in the order Anura , formerly referred to as Salientia . Most frogs are characterized by a short body, webbed digits , protruding eyes and the absence of a tail...
s, and spider
Spider
Spiders are air-breathing arthropods that have eight legs, and chelicerae with fangs that inject venom. They are the largest order of arachnids and rank seventh in total species diversity among all other groups of organisms...
s.

Some lizard
Lizard
Lizards are a widespread group of squamate reptiles, with nearly 3800 species, ranging across all continents except Antarctica as well as most oceanic island chains...
s and snake
Snake
Snakes are elongate, legless, carnivorous reptiles of the suborder Serpentes that can be distinguished from legless lizards by their lack of eyelids and external ears. Like all squamates, snakes are ectothermic, amniote vertebrates covered in overlapping scales...
s develop a true tooth
Tooth
Teeth are small, calcified, whitish structures found in the jaws of many vertebrates that are used to break down food. Some animals, particularly carnivores, also use teeth for hunting or for defensive purposes. The roots of teeth are embedded in the Mandible bone or the Maxillary bone and are...
that is shed after use; other reptiles and birds generally develop an analogous epidermal horn that is reabsorbed or falls off.

In birds, the process of breaking open the eggshell
Eggshell
An eggshell is the outer covering of a hard-shelled egg and of some forms of eggs with soft outer coats.- Insect eggs :Insects and other arthropods lay a variety of styles and shapes of eggs. Some have gelatinous or skin-like coverings, others have hard eggshells. Softer shells are mostly protein....
is commonly referred to as pipping.

Chicks have a pipping muscle
Muscle
Muscle is a contractile tissue of animals and is derived from the mesodermal layer of embryonic germ cells. Muscle cells contain contractile filaments that move past each other and change the size of the cell. They are classified as skeletal, cardiac, or smooth muscles. Their function is to...
on the back of their necks. It is this muscle which gives them the strength to force the egg tooth through the inner membrane of the eggshell.

When a chick becomes too large to absorb oxygen
Oxygen
Oxygen is the element with atomic number 8 and represented by the symbol O. Its name derives from the Greek roots ὀξύς and -γενής , because at the time of naming, it was mistakenly thought that all acids required oxygen in their composition...
through the pores of its eggshell, it uses its egg tooth to peck a hole in the air sac located at the flat end of the egg. This sac provides a few hours worth of air, during which the chick breaks through the eggshell to the outside. The egg tooth falls off several weeks after hatching.

Kiwi
Kiwi
Kiwi are flightless birds endemic to New Zealand, in the genus Apteryx and family Apterygidae.At around the size of a domestic chicken, kiwi are by far the smallest living ratites and lay the largest egg in relation to their body size of any species of bird in the world...
s lack an egg tooth, instead using their legs and beak to break through a relatively thin eggshell. The superprecocial
Superprecocial
The term superprecocial refers to a level of physical maturity and capability in young animals that is most extreme. Examples are the Megapode birds, which have full flight feathers and which, in some species, can fly on the same day they hatch from their eggs...
megapodes possess an egg tooth in their early embryonic development, but instead use their claws during hatching. 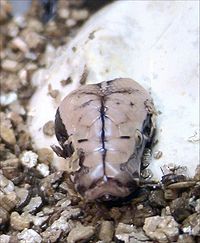 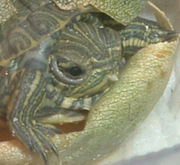 Baby snakes generally hatch from eggs with tough, leathery shells. A baby snake's egg tooth tears a hole directly through the shell, and falls off the first time the snake sheds its skin. Lizards have similarly leathery eggshells.

A baby crocodile
Crocodile
A crocodile is any species belonging to the family Crocodylidae . The term can also be used more loosely to include all extant members of the order Crocodilia: i.e...
has an egg tooth on the end of its snout. It is a tough piece of skin which is totally reabsorbed less than two months after hatching. Crocodile eggs are similar to those of birds in that they have an inner membrane and an outer one. The egg tooth is used to tear open the inner membrane; the baby crocodile can then push its way through the outer shell. If conditions are particularly dry that year, the inner membrane may be too tough for the crocodile to break through, and without assistance it will simply die inside the egg. Generally, however, the mother crocodile is there to help free it.
The source of this article is wikipedia, the free encyclopedia.  The text of this article is licensed under the GFDL.