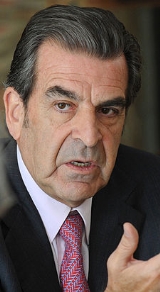 Does he have sons&barthers
More

Encyclopedia
Eduardo Alfredo Juan Bernardo Frei Ruiz-Tagle (eˈðwarðo alˈfɾeðo ˈxwan βerˈnarðo ˈfɾei ˈrwiθ ˈtaɣle; born June 24, 1942) is a Chile
Chile
Chile ,officially the Republic of Chile , is a country in South America occupying a long, narrow coastal strip between the Andes mountains to the east and the Pacific Ocean to the west. It borders Peru to the north, Bolivia to the northeast, Argentina to the east, and the Drake Passage in the far...
an politician and civil engineer
Civil engineering
Civil engineering is a professional engineering discipline that deals with the design, construction, and maintenance of the physical and naturally built environment, including works like roads, bridges, canals, dams, and buildings...
who was President of Chile
President of Chile
The President of the Republic of Chile is both the head of state and the head of government of the Republic of Chile. The President is responsible of the government and state administration...
from 1994 to 2000. He is currently Senator
Senate of Chile
The Senate of the Republic of Chile is the upper house of Chile's bicameral National Congress, as established in the current Constitution of Chile.-Composition:...
for Los Ríos
Los Ríos Region
The XIV Los Ríos Region is one of Chile's 15 first order administrative divisions. Its capital is Valdivia. Pop. 356,396 . It began to operate as region on October 2, 2007. It was created by subdividing the Los Lagos Region in southern Chile...
and was President of the Senate
President of the Senate of Chile
The President of the Senate of Chile is the highest authority of the Senate of Chile. The position comes after the Ministers of State in the line of succession of the President of Chile in the case of temporary incapacitation or vacancy ....
from 2006 to 2008. He attempted a comeback as the candidate of the ruling Concertación coalition for the 2009 presidential election
Chilean presidential election, 2009
The Chilean presidential election of 2009 was held on Sunday December 13, 2009. Based on the two-round system, since none of the candidates secured the absolute majority needed to take the presidency outright, a run-off between the two most-voted candidates —center-right Sebastián Piñera and...
, but was narrowly defeated. His father was Eduardo Frei Montalva
Eduardo Frei Montalva
Eduardo Frei Montalva was a Chilean political leader of world stature. In his long political career, he was Minister of Public Works, president of his Christian Democratic Party, senator, President of the Senate, and president of Chile from 1964 to 1970...
who was President of Chile from 1964 to 1970.

Frei was born in Santiago to Eduardo Frei Montalva
Eduardo Frei Montalva
Eduardo Frei Montalva was a Chilean political leader of world stature. In his long political career, he was Minister of Public Works, president of his Christian Democratic Party, senator, President of the Senate, and president of Chile from 1964 to 1970...
and María Ruiz-Tagle Jiménez. He received all his schooling at the Luis Campino Institute. He then attended the University of Chile, where he graduated as a Civil Engineer, specializing in hydraulics
Hydraulics
Hydraulics is a topic in applied science and engineering dealing with the mechanical properties of liquids. Fluid mechanics provides the theoretical foundation for hydraulics, which focuses on the engineering uses of fluid properties. In fluid power, hydraulics is used for the generation, control,...
. After graduation, he followed advanced courses in management in Italy
Italy
Italy , officially the Italian Republic languages]] under the European Charter for Regional or Minority Languages. In each of these, Italy's official name is as follows:;;;;;;;;), is a unitary parliamentary republic in South-Central Europe. To the north it borders France, Switzerland, Austria and...
.

Frei took his first steps in politics while at the university, where he was a student leader. In 1958, he joined the Christian Democrat
Christian Democrat Party of Chile
The Christian Democratic Party is a political party in Chile and governs as part of the Coalition of Parties for Democracy coalition. In the 2009 election it won 19 congress seats and 9 senate seats....
party, and in 1964 participated actively in his father's successful presidential campaign. Between 1969 and 1988 he concentrated on his profession, as one of the partners of Sigdo Koppers
Sigdo Koppers
Sigdo Koppers is one of the most important Chilean conglomerates with operations in the Americas, Europe and Asia-Pacific. SK activities are organized in three areas: In the Service Area are construction and industrial erection and transport and logistics business; in the Industrial Area are the...
S.A., the largest engineering company in Chile.

In 1988 Frei founded and promoted the Comité Pro Elecciones Libres ("Committee for the promotion of free elections"). In 1989 he was elected Senator for Santiago, obtaining the highest amount of votes in the whole country. In the Senate, he presided over the Treasury and Budget commission, and was a member of the Housing commission.

In 1992 Frei participated in the primary presidential elections of his coalition, where he defeated Ricardo Lagos
Ricardo Lagos
Ricardo Froilán Lagos Escobar is a lawyer, economist and social democrat politician, who served as president of Chile from 2000 to 2006. He won the 1999-2000 presidential election by a narrow margin in a runoff over Independent Democrat Union candidate Joaquín Lavín...
, and then went on to win the presidential elections in 1993. He took office on March 11, 1994 and was succeeded by Lagos in 2000. Frei’s presidency was notable in making improvements in health and education, together with reducing poverty. Following the end of his presidency, Frei assumed, as a former President, a seat as senator-for-life
Senator for life
A senator for life is a member of the senate or equivalent upper chamber of a legislature who has life tenure. , 7 Italian Senators out of 322, 4 out of the 47 Burundian Senators and all members of the British House of Lords have lifetime tenure...
in Congress. Given that Constitutional reforms in 2005 abolished life senators starting in 2006, Frei ran for an elected Senate seat in the December 2005 parliamentary elections
Chilean parliamentary election, 2005
The 2005 Chilean parliamentary election took place on December 11, 2005, in conjunction with the presidential election. All of the 120 seats in the Chamber of Deputies were contested, while 20 out of 38 seats in the Senate were up for election . Deputies serve for a period of four years, while...
and was victorious. He was elected in the electoral district of Valdivia Province
Valdivia Province
Valdivia Province is one of two provinces of the southern Chilean region of Los Ríos . The provincial capital is Valdivia. Located in the province are two important rivers, the Calle-Calle / Valdivia River and the Cruces River.It is part of Northern Patagonia and its wild virgin forest embrace the...
and Osorno Province
Osorno Province
Osorno Province is one of the four provinces in the southern Chilean region of Los Lagos . The province has an area of and a population of 221,509 distributed across seven communes . The provincial capital is the city of Osorno....
together with Andrés Allamand
Andrés Allamand
Andrés Allamand Zavala , a Chilean politician, is the founder and one of the past leaders of Renovación Nacional, currently in power. He is of French, and Basque descent. On January 14, 2011 he was named Minister of Defense by president Sebastián Piñera. He was sworn in on January 16,...
. On March 11, 2006 Frei became President of the Senate, like his father, who was also President of the Senate after being President of the Republic.

In 2009-2010, Frei ran for the presidency of Chile for a second time, again as the candidate of the centre-left Concertación  center-coalition, promising continuity of the popular outgoing President Michelle Bachelet
Michelle Bachelet
Verónica Michelle Bachelet Jeria is a Social Democrat politician who was President of Chile from 11 March 2006 to 11 March 2010. She was the first woman president of her country...
's path. Some of his presidential campaign banners and billboards pictured him accompanied by Michelle Bachelet over his left shoulder. In the first round of the elections, held on December 13, 2009, Frei held 29.60% of the official vote, second to his opponent Sebastian Piñera
Sebastián Piñera
Miguel Juan Sebastián Piñera Echenique is a Chilean businessman and politician. He was elected President of Chile in January 2010, taking office in March 2010.- Education :...
, who led with 44.05%. Since neither candidate received more than half of the total votes, a run-off election was held on Sunday, January 17, 2010. The first preliminary results announced by the Deputy Interior Ministry at 21:00 GMT on election day gave Piñera 51.87% and Frei holding 48.12%. Frei conceded to Piñera at 21:44 GMT.

In a graceful exit from the campaign, former President Eduardo Frei stated,

"The election is over and Chileans have shown civic maturity... The results clearly show the solidity of our democracy. It has been clean and transparent in line with our tradition. I want to congratulate Pinera, to whom most Chileans have given their trust for the next four years." '