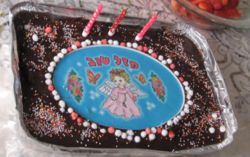 Edible ink printing, is the process of creating preprinted images with edible food colors on to various confectionery
Confectionery
Confectionery is the set of food items that are rich in sugar, any one or type of which is called a confection. Modern usage may include substances rich in artificial sweeteners as well...
products such as cookies, cakes, or pastries. Edible Image designs can either be preprinted, or created with an edible printer, a specialty device which transfers an image onto a thin, edible paper. The
paper is made of starches and sugars and printed on with edible food colors. Some Edible Image designs have been approved by the Food and Drug Administration
Food and Drug Administration
The Food and Drug Administration is an agency of the United States Department of Health and Human Services, one of the United States federal executive departments...
and carry its Generally Recognized as Safe certification. High quality images retain color clarity and resist color bleeding, even on high moisture applications.

Edible paper is the paper
Paper
Paper is a thin material mainly used for writing upon, printing upon, drawing or for packaging. It is produced by pressing together moist fibers, typically cellulose pulp derived from wood, rags or grasses, and drying them into flexible sheets....
used in edible ink printing. The first papers of this process used rice paper
Rice paper
Rice paper usually refers to paper made from parts of the rice plant, like rice straw or rice flour. The term is also used for paper made from or containing other plants, such as hemp, bamboo or mulberry...
, while modern versions use frosting sheets. It may be consumed without harsh effects on a normal human digestive system. Usually, the paper has no flavor and very little texture. The paper is firm enough to be printed on in a standard printer. However, the paper dissolves quickly when brought in contact with moist frosting. The end effect is that the image (usually a photograph) on the paper appears to be printed on the icing.

While the paper is edible, not all printer inks are edible. Ink that is not specifically marketed as being edible may be harmful or fatal if swallowed. Edible toner for laser printers is not currently available. Any inkjet or bubblejet printer can be used to print, although resolution
Image resolution
Image resolution is an umbrella term that describes the detail an image holds. The term applies to raster digital images, film images, and other types of images. Higher resolution means more image detail....
may be poor, and care should be taken to avoid contaminating the edible inks with previously used inks. Inkjet or bubblejet printers can be converted to print using edible ink, and cartridges of edible ink are commercially available.

Some edible inks are powdered, but if they are easily soluble in water they can also be used as any other edible ink without reducing quality. Edible paper is used on cakes, cookies, cupcakes, and even marshmallows (in Africa during the holidays).
The source of this article is wikipedia, the free encyclopedia.  The text of this article is licensed under the GFDL.