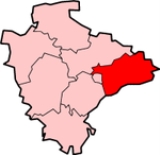 Encyclopedia
East Devon is a local government district
Non-metropolitan district
Non-metropolitan districts, or colloquially shire districts, are a type of local government district in England. As created, they are sub-divisions of non-metropolitan counties in a so-called "two-tier" arrangement...
in Devon
Devon
Devon is a large county in southwestern England. The county is sometimes referred to as Devonshire, although the term is rarely used inside the county itself as the county has never been officially "shired", it often indicates a traditional or historical context.The county shares borders with...
, England
England
England is a country that is part of the United Kingdom. It shares land borders with Scotland to the north and Wales to the west; the Irish Sea is to the north west, the Celtic Sea to the south west, with the North Sea to the east and the English Channel to the south separating it from continental...
. Its council is based in Sidmouth
Sidmouth
Sidmouth is a small town on the English Channel coast in Devon, South West England. The town lies at the mouth of the River Sid in the East Devon district, south east of Exeter. It has a population of about 15,000, of whom 40% are over 65....
, and the largest town is Exmouth
Exmouth
Exmouth is a town in Devon. It may also refer to:Places*Exmouth Peninsula in Southern Chile*Exmouth, Western AustraliaPeople*Edward Pellew, 1st Viscount Exmouth , a British naval officerShips...
.

In the 2001 census
United Kingdom Census 2001
A nationwide census, known as Census 2001, was conducted in the United Kingdom on Sunday, 29 April 2001. This was the 20th UK Census and recorded a resident population of 58,789,194....
it was found that a third of East Devon's population were over 60. The average for England was 24%. East Devon also had a higher number of people living in 'Medical and Care Establishments' at 1.6% compared to the England average of 0.9%.

The entire East Devon coastline from Exmouth to the border with Dorset
Dorset
Dorset , is a county in South West England on the English Channel coast. The county town is Dorchester which is situated in the south. The Hampshire towns of Bournemouth and Christchurch joined the county with the reorganisation of local government in 1974...
is part of the designated World Heritage Site
World Heritage Site
A UNESCO World Heritage Site is a place that is listed by the UNESCO as of special cultural or physical significance...
called the Jurassic Coast
Jurassic Coast
The Jurassic Coast is a World Heritage Site on the English Channel coast of southern England. The site stretches from Orcombe Point near Exmouth in East Devon to Old Harry Rocks near Swanage in East Dorset, a distance of ....
, the designated area itself continues up to Old Harry Rocks
Old Harry Rocks
The Old Harry Rocks are two chalk sea stacks located at Handfast Point, on the Isle of Purbeck in Dorset, southern England.- Location :Old Harry Rocks lie directly east of Studland, about 4 kilometres northeast of Swanage, and about 10 kilometres south of the large towns of Poole and...
near Swanage
Swanage
Swanage is a coastal town and civil parish in the south east of Dorset, England. It is situated at the eastern end of the Isle of Purbeck, approximately 10 km south of Poole and 40 km east of Dorchester. The parish has a population of 10,124 . Nearby are Ballard Down and Old Harry Rocks,...
.