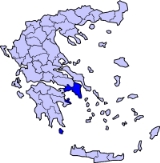 The regional unit East Attica is subdivided into 13 municipalities. These are (number as in the map in the infobox):

As a part of the 2011 Kallikratis government reform, the regional unit East Attica was created out of the former prefecture
Prefectures of Greece
During the first administrative division of independent Greece in 1833–1836 and then again from 1845 until their abolition with the Kallikratis reform in 2010, the prefectures were the country's main administrative unit...
East Attica . The prefecture had the same territory as the present regional unit. At the same time, the municipalities were reorganised, according to the table below.

The prefecture of East Attica was subdivided into three provinces
Provinces of Greece
The provinces of Greece were sub-divisions of some the country's prefectures. From 1887, the provinces were abolished as actual administrative units, but were retained for some state services, especially finance services and education, as well as for electoral purposes...
: the Province of Marathon
Marathon, Greece
Marathon is a town in Greece, the site of the battle of Marathon in 490 BC, in which the heavily outnumbered Athenian army defeated the Persians. The tumulus or burial mound for the 192 Athenian dead that was erected near the battlefield remains a feature of the coastal plain...
(capital Marathon), the Province of Mesogia (capital Koropi), and the Province of Lavriotiki (capital Lavrio). They were abolished before the Kallikratis programme came into effect.