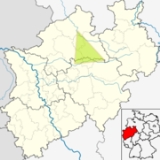 Encyclopedia
Dreingau is the medieval name of one of five Saxon
Saxons
The Saxons were a confederation of Germanic tribes originating on the North German plain. The Saxons earliest known area of settlement is Northern Albingia, an area approximately that of modern Holstein...
pagi (i.e., boroughs) in what today is the Münsterland
Münster (region)
Münster is one of the five Regierungsbezirke of North Rhine-Westphalia, Germany, located in the north of the state, and named after the city of Münster. It includes the area which in medieval times was known as the Dreingau....
in Westphalia
Westphalia
Westphalia is a region in Germany, centred on the cities of Arnsberg, Bielefeld, Dortmund, Minden and Münster.Westphalia is roughly the region between the rivers Rhine and Weser, located north and south of the Ruhr River. No exact definition of borders can be given, because the name "Westphalia"...
. During the Middle Ages documents referred to it as Dreine, Dreni, Drieni, Dragini, Dragieni, Drachina or Treine. The name came into use around the year 800, and is hardly used anymore today. It has survived only in the name of the town Drensteinfurt
Drensteinfurt
Drensteinfurt is a town in the district of Warendorf, in North Rhine-Westphalia, Germany. It is situated approx. 15 km north of Hamm and 20 km south of Münster...
, and in the name of a regional newspaper, the Dreingau-Zeitung. 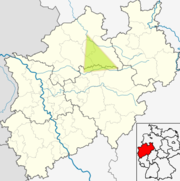 The origins of the name Dreingau are disputed; it might derive either from a medieval term denoting a "fertile land," or might describe a "dry land". Considering that the Saxon pagi still held extensive marshlands at this time, both interpretations might well be equivalent.

Notable places mentioned in medieval documents in the context of the Dreingau include the village Wernina (now Werne
Werne
Werne is a town in the Federal state of North Rhine-Westphalia in the Unna district in Germany. It is located on the southern edge of the Münsterland region near the Ruhrgebiet...
), Seliheim (now Selm
Selm
Selm is a town in the district of Unna, in North Rhine-Westphalia, Germany. It is situated approximately 20 kilometers north of Dortmund and 25 kilometers west of Hamm.- Geography :The town belongs to the southern part of the Münsterland...
), and Liesborn Abbey
Liesborn Abbey
Liesborn Abbey was a Benedictine monastery in Liesborn in what was originally the Dreingau. Liesborn is now a part of Wadersloh in the district of Warendorf in North Rhine-Westphalia, Germany.-History:...
but interestingly there is little mention of Münster
Münster
Münster is an independent city in North Rhine-Westphalia, Germany. It is located in the northern part of the state and is considered to be the cultural centre of the Westphalia region. It is also capital of the local government region Münsterland...
.

The Dreingau had been a theatre of war even before it got its name. In the times of the expansionist drive of the Roman Empire
Roman Empire
The Roman Empire was the post-Republican period of the ancient Roman civilization, characterised by an autocratic form of government and large territorial holdings in Europe and around the Mediterranean....
against the Germanic people the Battle of the Lupia River
Battle of the Lupia River
The Battle of the Lupia River - the Lippe River flows westwards through the Ruhr Valley in North Rhine-Westphalia. The battle was fought in 11 BC between a Roman force led by Nero Claudius Drusus and the Sicambri. Drusus defeated the Sicambri, and some of the defeated were moved to west of the...
in 16 BC and the Battle of Idistaviso
Battle of the Weser River
The Battle of the Weser River, sometimes known as a first Battle of Minden, was fought in 16 AD between Roman legions commanded by Emperor Tiberius' heir and adopted son Germanicus, and an alliance of Germanic tribes commanded by Arminius...
in 16 AD mark the period when the Dreingau area was either a staging point or a battlefield. It figured centrally in the Saxon Wars
Saxon Wars
The Saxon Wars were the campaigns and insurrections of the more than thirty years from 772, when Charlemagne first entered Saxony with the intent to conquer, to 804, when the last rebellion of disaffected tribesmen was crushed. In all, eighteen battles were fought in what is now northwestern Germany...
of Charlemagne
Charlemagne
Charlemagne was King of the Franks from 768 and Emperor of the Romans from 800 to his death in 814. He expanded the Frankish kingdom into an empire that incorporated much of Western and Central Europe. During his reign, he conquered Italy and was crowned by Pope Leo III on 25 December 800...
from the 772 onward. During the Thirty Years' War
Thirty Years' War
The Thirty Years' War was fought primarily in what is now Germany, and at various points involved most countries in Europe. It was one of the most destructive conflicts in European history....
the Dreingau was devastated by troops led by Christian the Younger of Brunswick.