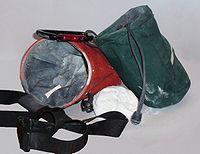 A drawstring is a string, cord, or rope used to "draw" (tighten) or tie closed an opening in fabric or other material. Typically, the drawstring is loose when not being used, and tightened when needed during use.

Drawstrings are used in clothing outerwear such as jackets (anoraks, hooded sweatshirts), trousers (breeches
Breeches
Breeches are an item of clothing covering the body from the waist down, with separate coverings for each leg, usually stopping just below the knee, though in some cases reaching to the ankles...
, pajamas, scrubs
Scrubs (clothing)
Scrubs are the shirts and trousers or gowns worn by nurses , surgeons, and other operating room personnel when "scrubbing in" for surgery. In the United Kingdom, they are sometimes known as Theatre Blues. They are designed to be simple with minimal places for dirt to hide, easy to launder, and...
), tracksuits, hats, berets and bags (pouch, sleeping bag, stuff sack, money bag
Money bag
A money bag is a bag of money used to hold and transport coins and banknotes from/to a mint, bank, ATM, milled, business, or other institution...
, book bags, back packs, garbage bags), and shoes (as a shoelace).

On clothing and bags, an aglet
Aglet
An aglet is a small plastic or metal sheath typically used on each end of a shoelace, cord, or drawstring. An aglet keeps the fibers of the lace or cord from unraveling; its firmness and narrow profile make it easier to hold and easier to feed through the eyelets, lugs, or other lacing...
is at the end of a drawstring to prevent unravelling, and a cord lock
Cord lock
A plastic cord lock attaches to drawstrings and tightens without the use of knots. Cord locks allow mountaineers to fasten clothing and camping equipment quickly in cold conditions when the fingers are encased in heavy gloves. They consist generally of three parts: a barrel, a toggle , and a spring...
can be used on a drawstring to keep it taut
Taut
A taut object is one under tension.Taut is also a surname, and may refer to:* Bruno Taut , prolific German architect, urban planner and author* Max Taut , German architectTAUT, an acronym, may refer to:...
. A safety pin
Safety pin
A safety pin is a simple fastening device, a variation of the regular pin which includes a simple spring mechanism and a clasp. The clasp serves two purposes: to form a closed loop thereby properly fastening the pin to whatever it is applied to, and to cover the end of the pin to protect the user...
, bodkin, or crochet hook
Crochet hook
A crochet hook is a type of needle with a hook at one end used to draw thread through knotted loops. Only one crochet hook is needed to make crochet stitches. The crochet hook's earliest use appears to have been in the late 18th century or early 19th century.Typical materials for crochet hooks...
can be used to pull a drawstring through a hole.

In 1996, the United States Consumer Product Safety Commission (CPSC) issued guidelines for drawstrings on children's upper outerwear to prevent strangling or entanglement on the neck and waist. Drawstrings can lead to deaths and injuries catching on such items as playground equipment, bus doors, or cribs. From 1985 to 1999, the CPSC received reports of 22 deaths and 48 non-fatal incidents with children’s clothing drawstrings. In 2006, the CPSC issued a letter urging certain garments do not have hood drawstrings that pose a strangulation hazard to children. Several recalls
Product recall
A product recall is a request to return to the maker a batch or an entire production run of a product, usually due to the discovery of safety issues. The recall is an effort to limit liability for corporate negligence and to improve or avoid damage to publicity...
due to strangulation hazards have occurred.