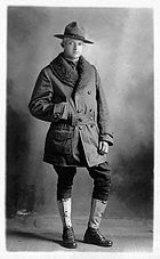 The term was used sparingly during World War II, gradually replaced by the appellations "G.I.
GI (term)
G.I. is a noun used to describe members of the United States armed forces or items of their equipment. The term is now used as an initialism of "Government Issue" , but originally referred to galvanized iron....
", "Troop
Troop
A troop is a military unit, originally a small force of cavalry, subordinate to a squadron and headed by the troop leader. In many armies a troop is the equivalent unit to the infantry section or platoon...
", or "Dogface
Dogface (military)
Dogface refers to a U.S. Army foot soldier serving in the infantry, especially in World War II.-History and usage:The origin of the term is difficult to ascertain. According to the recollections of veteran Phillip Leveque:...
", but was still used in popular songs of the day, as in the 1942 song "Johnny Doughboy found a Rose in Ireland." It dropped out of popular use soon after World War II.

The term was in use in the 1840s. The origins are unclear. The most often cited explanation is that it arose during the Mexican–American War
Mexican–American War
The Mexican–American War, also known as the First American Intervention, the Mexican War, or the U.S.–Mexican War, was an armed conflict between the United States and Mexico from 1846 to 1848 in the wake of the 1845 U.S...
, after observers noticed U.S. infantry forces were constantly covered with chalky dust from marching through the dry terrain of northern Mexico
Mexico
The United Mexican States , commonly known as Mexico , is a federal constitutional republic in North America. It is bordered on the north by the United States; on the south and west by the Pacific Ocean; on the southeast by Guatemala, Belize, and the Caribbean Sea; and on the east by the Gulf of...
, giving the men the appearance of unbaked dough
Dough
Dough is a paste made out of any cereals or leguminous crops by mixing flour with a small amount of water and/or other liquid. This process is a precursor to making a wide variety of foodstuffs, particularly breads and bread-based items , flatbreads, noodles, pastry, and similar items)...
. Another suggestion is that doughboys were so named because of their method of cooking field rations of the 1840s and 1850s, usually doughy flour and rice concoctions baked in the ashes of a camp fire, although this does not explain why only infantryman received the appellation.

Still another explanation involves pipe clay
Catlinite
Catlinite is a type of argillite , usually brownish-red in color, which occurs in a matrix of Sioux quartzite. Because it is fine-grained and easily worked, it is prized by Native Americans for use in making sacred pipes such as calumets and chanunpas...
, a substance with the appearance of dough used by pre-Civil War soldiers to clean their white garrison belts. The uniforms that were worn by American soldiers in the World War I era had very large buttons. The soldiers from allied nations suggested that the Americans were dressed like "Gingerbread Men" and then began to refer to the Americans as The Doughboys. 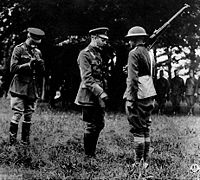