Encyclopedia
Douaumont is a commune
Communes of France
The commune is the lowest level of administrative division in the French Republic. French communes are roughly equivalent to incorporated municipalities or villages in the United States or Gemeinden in Germany...
in the Meuse
Meuse
Meuse is a department in northeast France, named after the River Meuse.-History:Meuse is one of the original 83 departments created during the French Revolution on March 4, 1790...
department in Lorraine
Lorraine (région)
Lorraine is one of the 27 régions of France. The administrative region has two cities of equal importance, Metz and Nancy. Metz is considered to be the official capital since that is where the regional parliament is situated...
in north-eastern France
France
The French Republic , The French Republic , The French Republic , (commonly known as France , is a unitary semi-presidential republic in Western Europe with several overseas territories and islands located on other continents and in the Indian, Pacific, and Atlantic oceans. Metropolitan France...
.

The village was destroyed during World War I
World War I
World War I , which was predominantly called the World War or the Great War from its occurrence until 1939, and the First World War or World War I thereafter, was a major war centred in Europe that began on 28 July 1914 and lasted until 11 November 1918...
. Today the Douaumont ossuary
Douaumont ossuary
The Douaumont ossuary is a memorial containing the remains of soldiers who died on the battlefield during the Battle of Verdun in World War I. It is located in Douaumont, France, within the Verdun battlefield.-History:...
, which contains the remains of more than 100,000 unknown soldiers of both French and German nationalities found on the battlefield, stands high above the landscape. 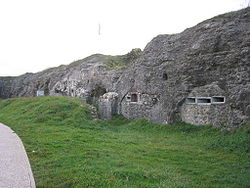 The construction work for Fort de Douaumont started in 1885 and the fort was continually reinforced until 1913. The fort is situated on some of the highest ground in the area.
At the very beginning of the Battle of Verdun
Battle of Verdun
The Battle of Verdun was one of the major battles during the First World War on the Western Front. It was fought between the German and French armies, from 21 February – 18 December 1916, on hilly terrain north of the city of Verdun-sur-Meuse in north-eastern France...
(February 1916) and due to French unpreparedness, the fort was easily captured by a small German raiding party. Douaumont was later recaptured by the French army in October 1916, after major casualties on both sides.