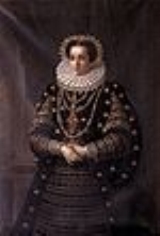 Encyclopedia
Dorothea Maria of Anhalt (Dessau
Dessau
Dessau is a town in Germany on the junction of the rivers Mulde and Elbe, in the Bundesland of Saxony-Anhalt. Since 1 July 2007, it is part of the merged town Dessau-Roßlau. Population of Dessau proper: 77,973 .-Geography:...
, 2 July 1574 – Weimar
Weimar
Weimar is a city in Germany famous for its cultural heritage. It is located in the federal state of Thuringia , north of the Thüringer Wald, east of Erfurt, and southwest of Halle and Leipzig. Its current population is approximately 65,000. The oldest record of the city dates from the year 899...
, 18 July 1617), was by birth a member of the House of Ascania and princess of Anhalt
Anhalt
Anhalt was a sovereign county in Germany, located between the Harz Mountains and the river Elbe in Middle Germany. It now forms part of the state of Saxony-Anhalt.- Dukes of Anhalt :...
. After her marriage, she became Duchess of Saxe-Weimar
Saxe-Weimar
Saxe-Weimar was one of the Saxon duchies held by the Ernestine branch of the Wettin dynasty in present-day Thuringia. The chief town and capital was Weimar.-Division of Leipzig:...
.

In 1586, the twelve-year-old Dorothea Maria was chosen by her father as Abbess of Gernrode
Gernrode
Gernrode is a town and a former municipality in Germany, in the district of Harz, Saxony-Anhalt. The town was first mentioned in 961 and became a city in 1539. Since 1 January 2011, it is part of the town Quedlinburg...
and Frose
Frose
Frose is a village and a former municipality in the district of Salzlandkreis, in Saxony-Anhalt, Germany. Since 15 July 2009, it is part of the town Seeland....
as the successor to her elder sister Agnes Hedwig
Agnes Hedwig of Anhalt
Agnes Hedwig of Anhalt was a Princess of Anhalt by birth, an Abbess of Gernrode, and by marriage Electress of Saxony and later Duchess of Schleswig-Holstein-Sonderburg-Plön....
.

Dorothea Maria died of injuries sustained while riding a horse. Her funeral took place on 24 August 1617 at Schloss Hornstein (later Wilhelmsburg Castle). On this occasion, the Fruitbearing Society
Fruitbearing Society
The Fruitbearing Society was a German literary society founded in 1617 in Weimar by German scholars and nobility to emulate the idea of the Accademia della Crusca in Florence and similar groups already thriving in Italy, to be followed in later years also in France and Britain...
was created and her younger brother, Louis of Anhalt-Köthen
Louis I, Prince of Anhalt-Köthen
Louis I of Anhalt-Köthen , was a German prince of the House of Ascania and ruler of the unified principality of Anhalt. From 1603, he was ruler of the principality of Anhalt-Köthen...
, was appointed its first leader.
The source of this article is wikipedia, the free encyclopedia.  The text of this article is licensed under the GFDL.