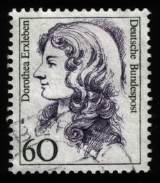 Encyclopedia
Dorothea Christiane Erxleben née Leporin (November 13, 1715, Quedlinburg
Quedlinburg
Quedlinburg is a town located north of the Harz mountains, in the district of Harz in the west of Saxony-Anhalt, Germany. In 1994 the medieval court and the old town was set on the UNESCO world heritage list....
– June 13, 1762 in Quedlinburg) was the first female
Female
Female is the sex of an organism, or a part of an organism, which produces non-mobile ova .- Defining characteristics :The ova are defined as the larger gametes in a heterogamous reproduction system, while the smaller, usually motile gamete, the spermatozoon, is produced by the male...
medical doctor
Physician
A physician is a health care provider who practices the profession of medicine, which is concerned with promoting, maintaining or restoring human health through the study, diagnosis, and treatment of disease, injury and other physical and mental impairments...
in Germany
Germany
Germany , officially the Federal Republic of Germany , is a federal parliamentary republic in Europe. The country consists of 16 states while the capital and largest city is Berlin. Germany covers an area of 357,021 km2 and has a largely temperate seasonal climate...

Erxleben was instructed in medicine by her father from an early age The Italian
Italy
Italy , officially the Italian Republic languages]] under the European Charter for Regional or Minority Languages. In each of these, Italy's official name is as follows:;;;;;;;;), is a unitary parliamentary republic in South-Central Europe. To the north it borders France, Switzerland, Austria and...
scientist Laura Bassi
Laura Bassi
Laura Maria Caterina Bassi was an Italian scientist, the first woman to officially teach at a university in Europe.-Biography:Born in Bologna into a wealthy family with a lawyer as a father, she was privately educated and tutored for seven years in her teens by Gaetano Tacconi...
's university professorship inspired Erxleben to fight for her right to practise medicine
Medicine
Medicine is the science and art of healing. It encompasses a variety of health care practices evolved to maintain and restore health by the prevention and treatment of illness....
. In 1742 she published a tract
Tract (literature)
A tract is a literary work, and in current usage, usually religious in nature. The notion of what constitutes a tract has changed over time. By the early part of the 21st century, these meant small pamphlets used for religious and political purposes, though far more often the former. They are...
arguing that women should be allowed to attend university

After being admitted to study by a dispensation
Dispensation (Catholic Church)
In the canon law of the Roman Catholic Church, a dispensation is the suspension by competent authority of general rules of law in particular cases...
of Frederick the Great, Erxleben received her M.D.
Doctor of Medicine
Doctor of Medicine is a doctoral degree for physicians. The degree is granted by medical schools...
from the University of Halle in 1754. She went on to analyse the obstacles preventing women from studying, among them housekeeping and children.