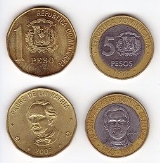 Encyclopedia
The Dominican peso, also called peso oro ("gold peso") is the currency of the Dominican Republic
Dominican Republic
The Dominican Republic is a nation on the island of La Hispaniola, part of the Greater Antilles archipelago in the Caribbean region. The western third of the island is occupied by the nation of Haiti, making Hispaniola one of two Caribbean islands that are shared by two countries...
. Its symbol is "$
Dollar sign
The dollar or peso sign is a symbol primarily used to indicate the various peso and dollar units of currency around the world.- Origin :...
", with "RD$" used when distinction from other peso
Peso
The word peso was the name of a coin that originated in Spain and became of immense importance internationally...
s (or dollar
Dollar
The dollar is the name of the official currency of many countries, including Australia, Belize, Canada, Ecuador, El Salvador, Hong Kong, New Zealand, Singapore, Taiwan, and the United States.-Etymology:...
s) is required; its ISO 4217
ISO 4217
ISO 4217 is a standard published by the International Standards Organization, which delineates currency designators, country codes , and references to minor units in three tables:* Table A.1 – Current currency & funds code list...
code is "DOP". Each peso is divided into 100 centavos ("cents"), for which the ¢ symbol is used. It is the only currency which is legal tender
Legal tender
Legal tender is a medium of payment allowed by law or recognized by a legal system to be valid for meeting a financial obligation. Paper currency is a common form of legal tender in many countries....
for all monetary transactions, whether public or private, in the Dominican Republic.

The first Dominican peso was introduced with the country's independence from Haiti
Dominican War of Independence
The Dominican Independence War gave the Dominican Republic independence from Haiti in 1844. Before the war, the whole island of Hispaniola had been under Haitian rule for 22 years when Haiti occupied the newly independent state of Haití Español in 1822....
in 1844. It replaced the Haitian gourde
Haitian gourde
- Banknotes :In 1875, banknotes were issued by the "National Bank of Haiti" in denominations of 25 centimes, 1 and 5 piastres . Following this, banknotes were issued in denominations ranging from 10 centimes to 5 gourdes by the various Haitian governments until 1916, when the "National Bank of the...
at par and was divided into 8 reales. The Dominican Republic decimalized in 1877, subdividing the peso into 100 centavos. A second currency, the franco
Dominican franco
The franco was a currency introduced in the Dominican Republic in 1891, as the Dominican Republic Government, then headed by president Ulises Heureaux intended to join the Latin Monetary Union. It was subdivided into 100 centesimos. Five denominations of coins were issued, 5, 10 and 50 centesimos,...
, was issued between 1891 and 1897 but did not replace the peso. However, in 1905, the peso was replaced by the U.S. dollar, at a rate of 5 pesos to the dollar. The peso oro was introduced in 1937 at par with the U.S. dollar, although the dollar continued to be used alongside the peso oro until 1947.

Only one denomination of coin was issued by the Dominican Republic before decimalization. This was the ¼ real, issued in 1844 in bronze and in both 1844 and 1848 in brass. Decimalization in 1877 brought about the introduction of three new coins, the 1, 2½ and 5 centavos. 1¼ centavo coins were also issued between 1882 and 1888. In 1891 Dominican Republic entered in the Latin monetary union and changed its currency to the franco including coins of 5 and 10 centesimos struck in bronze and 50 centesimos, 1 and 5 francos struck in silver. After the franco was abandoned, silver coins were introduced in 1897 in denominations of 10 and 20 centavos, ½ and 1 peso. The designs of these coins were very similar to those of the franco.

In 2011, the Banco Central de la República Dominicana has announced that all banknotes dated 2011 will be denominated in pesos dominicanos instead of pesos oro


Bills no longer in circulation


Relation with the U.S. dollar

The exchange rate for U.S. dollar vs. Dominican peso over the last few decades is as follows:

In 2003 the peso dramatically plummeted; a single US dollar was worth almost RD$57.00.

Since 2004 the peso has reached a more stable rate of RD$35–36 pesos to 1 U.S. dollar. As of January 2010, there were some RD$50.44 pesos to the euro
Euro
The euro is the official currency of the eurozone: 17 of the 27 member states of the European Union. It is also the currency used by the Institutions of the European Union. The eurozone consists of Austria, Belgium, Cyprus, Estonia, Finland, France, Germany, Greece, Ireland, Italy, Luxembourg,...
, or around RD$36.10 pesos to the U.S. dollar.