Encyclopedia
María de los Dolores Olmedo y Patiño Suarez (December 14, 1908 – July 26, 2002; Mexico City
Mexico City
Mexico City is the Federal District , capital of Mexico and seat of the federal powers of the Mexican Union. It is a federal entity within Mexico which is not part of any one of the 31 Mexican states but belongs to the federation as a whole...
) was a Mexican
Mexico
The United Mexican States , commonly known as Mexico , is a federal constitutional republic in North America. It is bordered on the north by the United States; on the south and west by the Pacific Ocean; on the southeast by Guatemala, Belize, and the Caribbean Sea; and on the east by the Gulf of...
businesswoman
Businessperson
A businessperson is someone involved in a particular undertaking of activities for the purpose of generating revenue from a combination of human, financial, or physical capital. An entrepreneur is an example of a business person...
, philanthropist
Philanthropist
A philanthropist is someone who engages in philanthropy; that is, someone who donates his or her time, money, and/or reputation to charitable causes...
and musician
Musician
A musician is an artist who plays a musical instrument. It may or may not be the person's profession. Musicians can be classified by their roles in performing music and writing music.Also....* A person who makes music a profession....
, better known for her friendship with Mexican painters Frida Kahlo
Frida Kahlo
Frida Kahlo de Rivera was a Mexican painter, born in Coyoacán, and perhaps best known for her self-portraits....
and her husband Diego Rivera
Diego Rivera
Diego María de la Concepción Juan Nepomuceno Estanislao de la Rivera y Barrientos Acosta y Rodríguez was a prominent Mexican painter born in Guanajuato, Guanajuato, an active communist, and husband of Frida Kahlo . His large wall works in fresco helped establish the Mexican Mural Movement in...
; she appeared on some of his paintings. Following Rivera's death in 1957, she and Rivera's daughter Guadalupe asked then president Adolfo López Mateos
Adolfo López Mateos
Adolfo López Mateos was a Mexican politician affiliated to the Institutional Revolutionary Party who served as President of Mexico from 1958 to 1964...
to consider Rivera and José Clemente Orozco
José Clemente Orozco
José Clemente Orozco was a Mexican social realist painter, who specialized in bold murals that established the Mexican Mural Renaissance together with murals by Diego Rivera, David Alfaro Siqueiros, and others...
's paintings historical monuments. 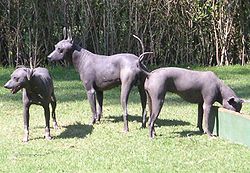 In 1962, she acquired a property at La Noria, Xochimilco
Xochimilco
Xochimilco is one of the sixteen delegaciones or boroughs within Mexican Federal District. The borough is centered on the formerly independent city of Xochimilco, which was established on what was the southern shore of Lake Xochimilco in the pre-Hispanic period...
in southern Mexico City
Mexico City
Mexico City is the Federal District , capital of Mexico and seat of the federal powers of the Mexican Union. It is a federal entity within Mexico which is not part of any one of the 31 Mexican states but belongs to the federation as a whole...
, which she would later convert into a museum
Museum
A museum is an institution that cares for a collection of artifacts and other objects of scientific, artistic, cultural, or historical importance and makes them available for public viewing through exhibits that may be permanent or temporary. Most large museums are located in major cities...
(named after herself) in 1994. Donating her entire collection of art including pre-Hispanic, colonial, folk, modern and contemporary art, the Dolores Olmedo Patiño Museum host the greatest collection of Frida Kahlo, Diego Rivera and Angelina Beloff
Angelina Beloff
Angelina Beloff was a Russian painter and sculptor, who worked predominantly in Mexico.- Biography :Beloff originally decided to study pediatrics, but then she matriculated to St. Petersburg Academy of Arts in 1904, where she studied until 1909...
. Upon her death in 2002, she left funds for taking care of her museum (Dolores Olmedo Museum in English
English language
English is a West Germanic language that arose in the Anglo-Saxon kingdoms of England and spread into what was to become south-east Scotland under the influence of the Anglian medieval kingdom of Northumbria...
), now open to the public.

The five-building complex contains up to 150 paintings, including 145 Rivera's, 25 from Kahlo's (and some of their scripts and drawings), nearly 6,000 pre-Hispanic figurines and sculptures as well diverse living animals such as geese
Goose
The word goose is the English name for a group of waterfowl, belonging to the family Anatidae. This family also includes swans, most of which are larger than true geese, and ducks, which are smaller....
, ducks, six xoloitzcuintles
Mexican Hairless Dog
The Mexican Hairless Dog is a rare, hairless breed of dog, the size of which varies greatly. It is also known as Xoloitzcuintle .-History:...
and Indian Peafowl
Indian Peafowl
The Indian Peafowl or Blue Peafowl is a large and brightly coloured bird of the pheasant family native to South Asia, but introduced and semi-feral in many other parts of the world...
s kept in gardens. Recently new areas have been added to the museum, "her private rooms" where she kept original decorations of her house such as ivory, china, and artwork by artist whom she nurtured in her latter years including José Juárez and Francisco Guevara
Francisco Guevara
Francisco Jose Guevara is a Mexican visual artist and curator, descended from Zapotec and Jewish families from Puebla, Zacatecas and Oaxaca...
.
The source of this article is wikipedia, the free encyclopedia.  The text of this article is licensed under the GFDL.