Cyprus
Cyprus
Cyprus , officially the Republic of Cyprus , is a Eurasian island country, member of the European Union, in the Eastern Mediterranean, east of Greece, south of Turkey, west of Syria and north of Egypt. It is the third largest island in the Mediterranean Sea.The earliest known human activity on the...
is divided
Administrative division
An administrative division, subnational entity, or country subdivision is a portion of a country or other political division, established for the purpose of government. Administrative divisions are each granted a certain degree of autonomy, and are required to manage themselves through their own...
into six district
District
Districts are a type of administrative division, in some countries managed by a local government. They vary greatly in size, spanning entire regions or counties, several municipalities, or subdivisions of municipalities.-Austria:...
s , whose capitals share the same name:


The districts are further divided up into municipalities. 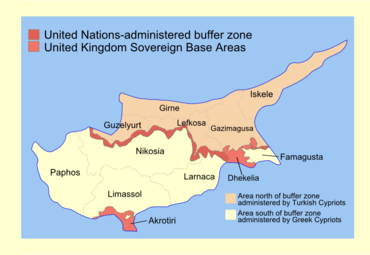