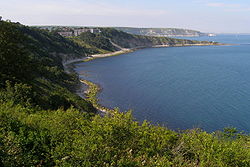 A discordant coastline occurs where bands of differing rock
Rock (geology)
In geology, rock or stone is a naturally occurring solid aggregate of minerals and/or mineraloids.The Earth's outer solid layer, the lithosphere, is made of rock. In general rocks are of three types, namely, igneous, sedimentary, and metamorphic...
type run perpendicular
Perpendicular
In geometry, two lines or planes are considered perpendicular to each other if they form congruent adjacent angles . The term may be used as a noun or adjective...
to the coast
Coast
A coastline or seashore is the area where land meets the sea or ocean. A precise line that can be called a coastline cannot be determined due to the dynamic nature of tides. The term "coastal zone" can be used instead, which is a spatial zone where interaction of the sea and land processes occurs...
.

The differing resistance to erosion leads to the formation of headlands and bays
Headlands and bays
Headlands and bays are two related features of the coastal environment.- Geology and geography :Headlands and bays are often found on the same coastline. A bay is surrounded by land on three sides, whereas a headland is surrounded by water on three sides. Headlands are characterized by high,...
. A hard rock type such as granite
Granite
Granite is a common and widely occurring type of intrusive, felsic, igneous rock. Granite usually has a medium- to coarse-grained texture. Occasionally some individual crystals are larger than the groundmass, in which case the texture is known as porphyritic. A granitic rock with a porphyritic...
is resistant to erosion and creates a promontory
Promontory
Promontory may refer to:*Promontory, a prominent mass of land which overlooks lower lying land or a body of water*Promontory, Utah, the location where the United States first Transcontinental Railroad was completed...
whilst a softer rock type such as the clay
Clay
Clay is a general term including many combinations of one or more clay minerals with traces of metal oxides and organic matter. Geologic clay deposits are mostly composed of phyllosilicate minerals containing variable amounts of water trapped in the mineral structure.- Formation :Clay minerals...
s of Bagshot Beds
Bagshot Beds
In geology, the Bagshot Beds are a series of sands and clays of shallow-water origin, some being fresh-water, some marine. They belong to the upper Eocene formation of the London and Hampshire basins, in England and derive their name from Bagshot Heath in Surrey. They are also well developed in...
is easily eroded creating a bay.