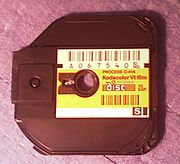 Disc film was a still-photography
Photography
Photography is the art, science and practice of creating durable images by recording light or other electromagnetic radiation, either electronically by means of an image sensor or chemically by means of a light-sensitive material such as photographic film...
film format
Film format
A film format is a technical definition of a set of standard characteristics regarding image capture on photographic film, for either stills or movies. It can also apply to projected film, either slides or movies. The primary characteristic of a film format is its size and shape.In the case of...
aimed at the consumer
Consumer
Consumer is a broad label for any individuals or households that use goods generated within the economy. The concept of a consumer occurs in different contexts, so that the usage and significance of the term may vary.-Economics and marketing:...
market
Marketplace
A marketplace is the space, actual, virtual or metaphorical, in which a market operates. The term is also used in a trademark law context to denote the actual consumer environment, ie. the 'real world' in which products and services are provided and consumed.-Marketplaces and street markets:A...
, and introduced by Kodak in 1982.

The film was in the form of a flat disc, and was fully housed within a plastic cartridge. Each disc held fifteen 11 × 8 mm exposures, arranged around the outside of the disc, with the disc being rotated 24° between each image.

The system was primarily a consumer-oriented product, and most cameras were self-contained units with no expansion capability. The camera
Camera
A camera is a device that records and stores images. These images may be still photographs or moving images such as videos or movies. The term camera comes from the camera obscura , an early mechanism for projecting images...
s were very simple to load and unload, and were generally completely automated. The cassette had a built-in dark slide
Dark slide (photography)
In photography, a dark slide is a wooden or metal plate that covers the sensitized emulsion side of a photographic plate. In use, a pair of plates joined back to back were used with both plates covered with a dark slide...
to prevent stray light
Stray light
Stray light is light in an optical system, which was not intended in the design. The light may be from the intended source, but follow paths other than intended, or it may be from a source other than the intended source...
reaching the film when the disc was removed.

Disc film did not prove hugely successful, mainly because the image on the negative was only 11 mm by 8 mm, leading to generally unacceptable grain and poor definition in the final prints.
The film was intended to be printed with special 6-element lenses from Kodak, but many labs simply printed discs with standard 3-element lenses used for larger negative formats. The resulting prints often disappointed the consumer.

The film was officially discontinued by the last manufacturer, Kodak, on December 31, 1999, though the cameras had disappeared from the market long before then.

There were several different manufacturers of Disc film. Kodak produced films throughout the complete lifespan of the format, but 3M
3M
3M Company , formerly known as the Minnesota Mining and Manufacturing Company, is an American multinational conglomerate corporation based in Maplewood, Minnesota, United States....
, Konica
Konica
was a Japanese manufacturer of, among other products, film, film cameras, camera accessories, photographic and photo-processing equipment, photocopiers, fax machines and laser printers.- History :...
and Fuji
Fujifilm
is a multinational photography and imaging company headquartered in Tokyo, Japan.Fujifilm's principal activities are the development, production, sale and servicing of color photographic film, digital cameras, photofinishing equipment, color paper, photofinishing chemicals, medical imaging...
also produced Disc film. While Kodak film was always eponymous, 3M and Konica made Disc film for many third parties, branded with the retailers logo. As with most photographic film, the country of manufacture is the best giveaway to the make.

Kodak's newest ideas with sharp fine-grained negative film were always tested in Disc format first, typically being one or two generations ahead of the equivalent 135 film
135 film
The term 135 was introduced by Kodak in 1934 as a designation for cartridge film wide, specifically for still photography. It quickly grew in popularity, surpassing 120 film by the late 1960s to become the most popular photographic film format...
s.

There are still labs remaining in North America and the UK able to process disc film. Examples are DVD Your Memories, ScanDigital, Blue Moon Camera and Machine, Film Rescue, Dwayne's Photo
Dwayne's Photo
Dwayne's Photo is a film processing facility in Parsons, Kansas founded in 1956. It was the last Kodak certified Kodachrome processing facility in the world, until the line was shut down on December 30, 2010 due to lack of developing chemicals.- History :...
, Rapid Photo Imaging Center Inc. and Rocky Mountain (reorganization in July 2010-still in operation but status unknown) in the USA, and Process C-22 in the UK, serving Europe. These are specialist services and each has its own advantages and disadvantages. The less expensive options provide a basic service while others are higher priced but include comprehensive digital corrections which greatly help improve the image quality of such long-expired film.

Disc film is not available to purchase new due to the very complex design. No manufacturers remain, nor are any likely to recommence production.