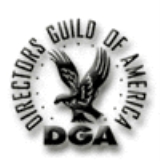 Encyclopedia
Directors Guild of America (DGA) is an entertainment labor union
Trade union
A trade union, trades union or labor union is an organization of workers that have banded together to achieve common goals such as better working conditions. The trade union, through its leadership, bargains with the employer on behalf of union members and negotiates labour contracts with...
which represents the interests of film
Film director
A film director is a person who directs the actors and film crew in filmmaking. They control a film's artistic and dramatic nathan roach, while guiding the technical crew and actors.-Responsibilities:...
and television
Television director
A television director directs the activities involved in making a television program and is part of a television crew.-Duties:The duties of a television director vary depending on whether the production is live or recorded to video tape or video server .In both types of productions, the...
directors in the United States motion picture industry. Founded as the Screen Directors Guild in 1936, the group became the DGA in 1960.

As a union that seeks to organize an individual profession, rather than multiple professions across an industry, the DGA is a craft union
Craft unionism
Craft unionism refers to organizing a union in a manner that seeks to unify workers in a particular industry along the lines of the particular craft or trade that they work in by class or skill level...
. It represents directors, assistant directors, stage managers, and production associates in television, and directors, assistant directors, unit production managers, technical coordinators, and location managers (New York & Chicago only) in film as well as similar positions in television commercials production.

The Guild has various training programs whereby successful applicants are placed in various productions and can gain experience working in the film or television industry.

The agreements signed between the Guild and film production companies make various stipulations covering pay and working conditions for Guild members, and require that all those employed in the relevant fields on a film made by that company are Guild members. Guild members are generally prevented from working for companies that have not signed an agreement with the DGA. This sometimes leads production companies which have no such agreement to form new companies, purely for the purpose of making a particular film, which do then sign an agreement with the DGA.

Not all Hollywood directors are DGA members. Notable directors such as George Lucas
George Lucas
George Walton Lucas, Jr. is an American film producer, screenwriter, and director, and entrepreneur. He is the founder, chairman and chief executive of Lucasfilm. He is best known as the creator of the space opera franchise Star Wars and the archaeologist-adventurer character Indiana Jones...
, Quentin Tarantino
Quentin Tarantino
Quentin Jerome Tarantino is an American film director, screenwriter, producer, cinematographer and actor. In the early 1990s, he began his career as an independent filmmaker with films employing nonlinear storylines and the aestheticization of violence...
, and Robert Rodriguez
Robert Rodriguez
Robert Anthony Rodríguez is an American film director, screenwriter, producer, cinematographer, editor and musician. He shoots and produces many of his films in his native Texas and Mexico. He has directed such films as Desperado, From Dusk till Dawn, The Faculty, Spy Kids, Sin City, Planet...
have refused membership or resigned from the guild over specific differences. Those who Aren't members of the guild are unable to direct for the larger movie studios, which are signatories to the guild's agreements that all directors must be guild members.

Other than wages and basic working condition the DGA has a particular role in protecting the creative rights of the film director. Such protections that the guild provides include defining the director's role, guarding the key concept of "one director to a picture" and the right to prepare a director's cut or edit. Generally each of these protections is to help offset the power that producers can have over a director during the filmmaking process. The Guild is also notable for having blocked the attempts of non-DGA members from participating in directing various projects, notably stopping Quentin Tarantino from directing an episode of the The X-Files
The X-Files
The X-Files is an American science fiction television series and a part of The X-Files franchise, created by screenwriter Chris Carter. The program originally aired from to . The show was a hit for the Fox network, and its characters and slogans became popular culture touchstones in the 1990s...
entitled "Never Again
Never Again (The X-Files)
"Never Again" is the thirteenth episode of the fourth season of the television series The X-Files.-Plot:In Philadelphia, Ed Jerse loses a divorce settlement to his ex-wife, who has sole custody of his child. After getting drunk at a local bar, Ed wanders into a tattoo parlor and impulsively...
".

The rule that a film can only have one single director, adopted to avoid producers and actors lobbying for a director's credit, is strongly defended by the DGA and is only waived for recognized directorial teams (as determined by the DGA) such as The Wachowskis, Hughes brothers
Hughes Brothers
Albert Hughes and Allen Hughes , known together professionally as the Hughes brothers, are American film directors, producers and screenwriters...
, Brothers Strause
Brothers Strause
Brothers Greg and Colin Strause are a directing duo, most famous for directing Aliens vs. Predator: Requiem and Skyline, and special effects artists who make movies and grew up in Waukegan, Illinois...
, and the Coen brothers
Coen Brothers
Joel David Coen and Ethan Jesse Coen known together professionally as the Coen brothers, are American filmmakers...
. The Coens for years divided credit, with Ethan taking producing credit, Joel taking directing credit, and both of them sharing the writing credit (even though the two of them shared all three duties between themselves) until The Ladykillers
The Ladykillers (2004 film)
The Ladykillers is a 2004 dark comedy film directed, written and produced by the Coen brothers and stars Tom Hanks, with a supporting cast that includes J. K. Simmons, Marlon Wayans, Tzi Ma, Ryan Hurst and Irma P. Hall...
. For instance, the DGA would not recognize Robert Rodriguez
Robert Rodriguez
Robert Anthony Rodríguez is an American film director, screenwriter, producer, cinematographer, editor and musician. He shoots and produces many of his films in his native Texas and Mexico. He has directed such films as Desperado, From Dusk till Dawn, The Faculty, Spy Kids, Sin City, Planet...
and Frank Miller
Frank Miller (comics)
Frank Miller is an American comic book artist, writer and film director best known for his dark, film noir-style comic book stories and graphic novels Ronin, Daredevil: Born Again, Batman: The Dark Knight Returns, Sin City and 300...
as a directorial "team" for Sin City
Sin City (film)
Sin City, also known as Frank Miller's Sin City, is a 2005 crime thriller film written, produced and directed by Frank Miller and Robert Rodriguez...
, which resulted in Rodriguez quitting the DGA so that Miller would receive director's credit.


Presidents of the Screen Directors Guild and the DGA 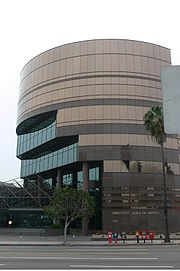