Encyclopedia
Gram-positive bacteria
Bacteria
Bacteria are a large domain of prokaryotic microorganisms. Typically a few micrometres in length, bacteria have a wide range of shapes, ranging from spheres to rods and spirals...
are those that are stained dark blue or violet by Gram staining
Gram staining
Gram staining is a method of differentiating bacterial species into two large groups ....
. This is in contrast to Gram-negative bacteria, which cannot retain the crystal violet
Crystal violet
Crystal violet or Gentian violet is a triarylmethane dye. The dye is used as a histological stain and in Gram’s method of classifying bacteria. Crystal violet has antibacterial, antifungal, and anthelmintic properties and was formerly important as a topical antiseptic...
stain, instead taking up the counterstain
Counterstain
A counterstain is a stain with color contrasting to the principal stain, making the stained structure more easily visible.An example is the malachite green counterstain to the fuchsine stain in the Gimenez staining technique....
(safranin
Safranin
Safranin is a biological stain used in histology and cytology. Safranin is used as a counterstain in some staining protocols, colouring all cell nuclei red. This is the classic counterstain in a Gram stain...
or fuchsine
Fuchsine
Fuchsine or rosaniline hydrochloride is a magenta dye with chemical formula C20H19N3·HCl. There are other similar chemical formulations of products sold as fuchsine, and several dozen other synonyms of this molecule....
) and appearing red or pink. Gram-positive organisms are able to retain the crystal violet stain because of the high amount of peptidoglycan
Peptidoglycan
Peptidoglycan, also known as murein, is a polymer consisting of sugars and amino acids that forms a mesh-like layer outside the plasma membrane of bacteria , forming the cell wall. The sugar component consists of alternating residues of β- linked N-acetylglucosamine and N-acetylmuramic acid...
in the cell wall
Cell envelope
The cell envelope is the cell membrane and cell wall plus an outer membrane, if one is present.Most bacterial cell envelopes fall into two major categories: Gram positive and Gram negative. These are differentiated by their Gram staining characteristics....
. Gram-positive cell walls typically lack the outer membrane found in Gram-negative bacteria. 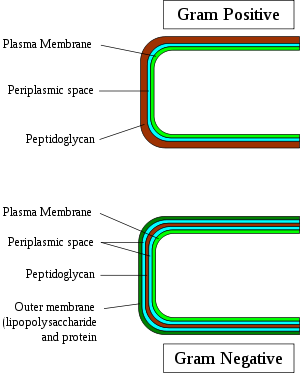 The following characteristics are generally present in a Gram-positive bacterium:

Both Gram-positive and Gram-negative bacteria may have a membrane called an S-layer
S-layer
An S-layer is a part of the cell envelope commonly found in bacteria, as well as among archaea.It consists of a monomolecular layer composed of identical proteins or glycoproteins. This two-dimensional structure is built via self-assembly and encloses the whole cell surface. Thus, the S-layer...
. In Gram-negative bacteria, the S-layer is attached directly to the outer membrane. In Gram-positive bacteria, the S-layer is attached to the peptidoglycan layer. Unique to Gram-positive bacteria is the presence of teichoic acid
Teichoic acid
Teichoic acids are bacterial polysaccharides of glycerol phosphate or ribitol phosphate linked via phosphodiester bonds.-Location and structure:...
s in the cell wall. Some particular teichoic acids, lipoteichoic acids, have a lipid component and can assist in anchoring peptidoglycan, as the lipid component is embedded in the membrane.

Along with cell shape, Gram staining is a rapid diagnostic tool of use to group species of Bacteria. In traditional and even some areas of contemporary microbiological practice, such staining, alongside growth requirement and antibiotic susceptibility testing, and other macroscopic and physiologic tests, forms the full basis for classification and subdivision of the Bacteria (e.g., see Figure, and pre-1990 versions of Bergey's Manual).
As such, historically, the kindgom Monera
Monera
Monera is a superseded kingdom that contains unicellular organisms without a nucleus , such as bacteria....
was divided into four divisions
Taxonomic rank
In biological classification, rank is the level in a taxonomic hierarchy. Examples of taxonomic ranks are species, genus, family, and class. Each rank subsumes under it a number of less general categories...
based primarily on Gram staining: Firmicutes (positive in staining), Gracillicutes (negative in staining), Mollicutes (neutral in staining) and Mendocutes (variable in staining).

Despite the wide acceptance and practical record of utility of the new molecular phylogeny, a small group, including Cavalier-Smith, still treat the Monera as a monophyletic clade
Clade
A clade is a group consisting of a species and all its descendants. In the terms of biological systematics, a clade is a single "branch" on the "tree of life". The idea that such a "natural group" of organisms should be grouped together and given a taxonomic name is central to biological...
and refer to the group as division "Posibacteria".

In general, Gram-positive bacteria have a single lipid bilayer (monoderms), whereas Gram-negative have two (diderms). Some taxa lack peptidoglycan (such as the domain Archaea, the class Mollicutes, some members of the Rhickettsiales, and the insect-endosymbionts of the Enterobacteriales) and are Gram-variable. This, however, does not always hold true.

The Chloroflexi
Chloroflexi
Chloroflexi is one of four classes of bacteria in the phylum Chloroflexi, known as filamentous green non-sulfur bacteria. They produce energy from light and are named for their green pigment, usually found in photosynthetic bodies called chlorosomes....
have a single layer, yet (with some exceptions) stain negative. Two related phyla to the Chloroflexi, the TM7 clade and the Ktedonobacteria, are also monoderms.

Some Firmicute species are not Gram-positive; these belong to the class Mollicutes
Mollicutes
The Mollicutes are a class of bacteria distinguished by the absence of a cell wall. The word "Mollicutes" is derived from the Latin mollis , and cutis . They are parasites of various animals and plants, living on or in the host's cells. Individuals are very small, typically only 0.2–0.3 μm in size...
(alternatively considered a class of the phylum Tenericutes
Tenericutes
Tenericutes is a phylum of bacteria that contains the Class Mollicutes. The name was validated in 1984 as a new division ....
), which lack peptidoglycan (Gram-indeterminate), and the class Negativicutes, which includes Selenomonas and which stain Gram-negative.

Most pathogens in humans are Gram-positive organisms. In the classical sense, six Gram-positive genera are typically pathogenic in humans. Two of these, Streptococcus
Streptococcus
Streptococcus is a genus of spherical Gram-positive bacteria belonging to the phylum Firmicutes and the lactic acid bacteria group. Cellular division occurs along a single axis in these bacteria, and thus they grow in chains or pairs, hence the name — from Greek στρεπτος streptos, meaning...
and Staphylococcus
Staphylococcus
Staphylococcus is a genus of Gram-positive bacteria. Under the microscope they appear round , and form in grape-like clusters....
, are cocci (sphere-shaped bacteria). The remaining organisms are bacilli
Bacilli
Bacilli refers to a taxonomic class of bacteria. It includes two orders, Bacillales and Lactobacillales, which contain several well-known pathogens like Bacillus anthracis .-Ambiguity:...
(rod-shaped bacteria) and can be subdivided based on their ability to form spore
Spore
In biology, a spore is a reproductive structure that is adapted for dispersal and surviving for extended periods of time in unfavorable conditions. Spores form part of the life cycles of many bacteria, plants, algae, fungi and some protozoa. According to scientist Dr...
s. The non-spore formers are Corynebacterium
Corynebacterium
Corynebacterium is a genus of Gram-positive rod-shaped bacteria. They are widely distributed in nature and are mostly innocuous. Some are useful in industrial settings such as C. glutamicum. Others can cause human disease. C...
and Listeria (a coccobacillus), whereas Bacillus
Bacillus
Bacillus is a genus of Gram-positive, rod-shaped bacteria and a member of the division Firmicutes. Bacillus species can be obligate aerobes or facultative anaerobes, and test positive for the enzyme catalase. Ubiquitous in nature, Bacillus includes both free-living and pathogenic species...
and Clostridium
Clostridium
Clostridium is a genus of Gram-positive bacteria, belonging to the Firmicutes. They are obligate anaerobes capable of producing endospores. Individual cells are rod-shaped, which gives them their name, from the Greek kloster or spindle...
produce spores. The spore-forming bacteria can again be divided based on their respiration
Cellular respiration
Cellular respiration is the set of the metabolic reactions and processes that take place in the cells of organisms to convert biochemical energy from nutrients into adenosine triphosphate , and then release waste products. The reactions involved in respiration are catabolic reactions that involve...
: Bacillus is a facultative anaerobe
Facultative anaerobic organism
A facultative anaerobic organism is an organism, usually a bacterium, that makes ATP by aerobic respiration if oxygen is present but is also capable of switching to fermentation...
, while Clostridium is an obligate anaerobe
Obligate anaerobe
Obligate anaerobes are microorganisms that live and grow in the absence of molecular oxygen; some of these are killed by oxygen. -Metabolism:...
.