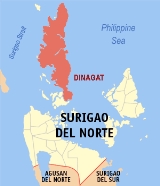 Encyclopedia
Dinagat Islands (PSGC: 168500000; ISO
ISO 3166-2:PH
ISO 3166-2:PH is the entry for the Philippines in ISO 3166-2, part of the ISO 3166 standard published by the International Organization for Standardization , which defines codes for the names of the principal subdivisions of all countries coded in ISO 3166-1.Currently for the Philippines, ISO...
: PH-DIN) is a province in the Philippines
Philippines
The Philippines , officially known as the Republic of the Philippines , is a country in Southeast Asia in the western Pacific Ocean. To its north across the Luzon Strait lies Taiwan. West across the South China Sea sits Vietnam...
, located on the south side of Leyte Gulf
Leyte Gulf
Leyte Gulf is a body of water immediately east of the island of Leyte in the Philippines, adjoining the Philippine Sea of the Pacific Ocean, at . The Gulf is bounded on the north by the island of Samar, which is separated from Leyte on the west by the narrow San Juanico Strait, and on the south by...
. Leyte is to its west, across Surigao Strait
Surigao Strait
Surigao Strait is a body of water in the Philippines located between the islands of Mindanao and Leyte. This strait connects the Bohol Sea with Leyte Gulf and is regularly crossed by ferries that transport goods and people between Visayas and Mindanao...
, and Mindanao
Mindanao
Mindanao is the second largest and easternmost island in the Philippines. It is also the name of one of the three island groups in the country, which consists of the island of Mindanao and smaller surrounding islands. The other two are Luzon and the Visayas. The island of Mindanao is called The...
is to its south. Its main island, Dinagat, is about 60 km from north to south.

Dinagat Islands Province is composed of seven municipalities, including the provincial capital, San Jose. Its six other municipalities are Dinagat, Loreto, Cagdianao, Libjo (Albor), Basilisa (Rizal) and Tubajon. The Municipality of Dinagat, formally established in 1855, is the oldest community in the province.