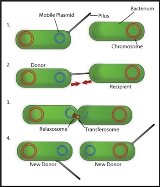 Overview
Digestion is the mechanical and chemical breakdown of food into smaller components that are more easily absorbed into a blood stream, for instance. Digestion is a form of catabolism
Catabolism
Catabolism is the set of metabolic pathways that break down molecules into smaller units and release energy. In catabolism, large molecules such as polysaccharides, lipids, nucleic acids and proteins are broken down into smaller units such as monosaccharides, fatty acids, nucleotides, and amino...
: a breakdown of large food molecules to smaller ones.

In mammals, food enters the mouth, being chewed by teeth, with chemical processing beginning with chemicals in the saliva
Saliva
Saliva , referred to in various contexts as spit, spittle, drivel, drool, or slobber, is the watery substance produced in the mouths of humans and most other animals. Saliva is a component of oral fluid. In mammals, saliva is produced in and secreted from the three pairs of major salivary glands,...
from the salivary gland
Salivary gland
The salivary glands in mammals are exocrine glands, glands with ducts, that produce saliva. They also secrete amylase, an enzyme that breaks down starch into maltose...
s. This is called mastication
Mastication
Mastication or chewing is the process by which food is crushed and ground by teeth. It is the first step of digestion and it increases the surface area of foods to allow more efficient break down by enzymes. During the mastication process, the food is positioned between the teeth for grinding by...
.

I fall about 3 years ago and broke my back in 2 places. It was not found for 3month after I fall. Now I have Gastroparesis. Can this because in part ...

Explain why the small intestine is better suited than the other gastrointestinal tract organs to carry out the absorptive process of digestion.
More
x