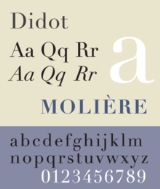 Encyclopedia
Didot is a name given to a group of typeface
Typeface
In typography, a typeface is the artistic representation or interpretation of characters; it is the way the type looks. Each type is designed and there are thousands of different typefaces in existence, with new ones being developed constantly....
s named after the famous French printing and type producing family. The classification is known as modern, or Didone. The typeface we know today was based on a collection of related types developed in the period 1784–1811. Firmin Didot
Firmin Didot
Firmin Didot was a French printer, engraver, and type founder. He invented the word "stereotype", which in printing refers to the metal printing plate created for the actual printing of pages , and used the process extensively, revolutionizing the book trade by his cheap editions...
(1764–1836) cut the letters, and cast them as type in Paris. His brother, Pierre Didot
Didot
Didot is the name of a family of French printers, punch-cutters and publishers. Through its achievements and advancements in printing, publishing and typography, the family has lent its name to typographic measurements developed by François-Ambroise Didot and the Didot typeface developed by Firmin...
(1760–1853) used the types in printing. His edition of La Henriade by Voltaire
Voltaire
François-Marie Arouet , better known by the pen name Voltaire , was a French Enlightenment writer, historian and philosopher famous for his wit and for his advocacy of civil liberties, including freedom of religion, free trade and separation of church and state...
in 1818 is considered his masterwork. The typeface takes inspiration from John Baskerville's
Baskerville
Baskerville is a transitional serif typeface designed in 1757 by John Baskerville in Birmingham, England. Baskerville is classified as a transitional typeface, positioned between the old style typefaces of William Caslon, and the modern styles of Giambattista Bodoni and Firmin Didot.The...
experimentation with increasing stroke contrast and a more condensed armature. The Didot family's development of a high contrast typeface with an increased stress is contemporary to similar faces developed by Giambattista Bodoni
Bodoni
-Cold Type versions:As it had been a standard type for many years, Bodoni was widely available in cold type. Alphatype, Autologic, Berthold, Compugraphic, Dymo, Harris, Mergenthaler, MGD Graphic Systems, and Varityper, Hell AG, Monotype, all sold the face under the name ‘’Bodoni, while Graphic...
in Italy. Didot is described as neoclassical, and is evocative of the Age of Enlightenment
Age of Enlightenment
The Age of Enlightenment was an elite cultural movement of intellectuals in 18th century Europe that sought to mobilize the power of reason in order to reform society and advance knowledge. It promoted intellectual interchange and opposed intolerance and abuses in church and state...
.

The "Foundry Daylight" version of Didot was commissioned and used by broadcast network CBS
CBS
CBS Broadcasting Inc. is a major US commercial broadcasting television network, which started as a radio network. The name is derived from the initials of the network's former name, Columbia Broadcasting System. The network is sometimes referred to as the "Eye Network" in reference to the shape of...
for many years alongside its famous "eye" logo. While the network's use of Didot with its logo is not as prevalent as it once was, it is still a common sight.

Several revivals of the Didot faces have been made, most of them for hot metal typesetting
Hot metal typesetting
In printing and typography, hot metal typesetting refers to 19th-century technologies for typesetting text in letterpress printing. This method injects molten type metal into a mold that has the shape of one or more glyphs...
. Like Bodoni, early digital versions suffered from a syndrome called "dazzle"–the hairline strokes in smaller point sizes nearly disappearing in printing. Among the more successful contemporary adaptations are the ones drawn by Adrian Frutiger
Adrian Frutiger
Adrian Frutiger is one of the prominent typeface designers of the 20th century, who continues to influence the direction of digital typography in the 21st century; he is best known for creating the typefaces Univers and Frutiger.-Early life:Adrian Frutiger was born in Unterseen, Canton of Bern, as...
for the Linotype foundry, and by Jonathan Hoefler
Jonathan Hoefler
Jonathan Hoefler is an American typeface designer. Hoefler founded Hoefler & Frere-Jones , a type foundry in New York that Hoefler shares with fellow type designer Tobias Frere-Jones.Hoefler has designed original typefaces for Rolling Stone Magazine, Harper’s Bazaar, The New York Times Magazine,...
for H&FJ. Both designs anticipate the degradation of hairline in smaller point sizes by employing heavier weighted strokes in the smaller point sizes.

Characteristics of this typeface are:

lower case:
square dot over the letter i.
double storey a.