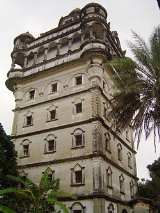 Encyclopedia
The Kaiping Diaolou are fortified multi-storey towers, generally made of reinforced concrete
Reinforced concrete
Reinforced concrete is concrete in which reinforcement bars , reinforcement grids, plates or fibers have been incorporated to strengthen the concrete in tension. It was invented by French gardener Joseph Monier in 1849 and patented in 1867. The term Ferro Concrete refers only to concrete that is...
. These towers are located mainly in Kaiping
Kaiping
Kaiping : Hoi3 Pen6) or Hoi Ping is a county-level city in Guangdong Province, southern China. It has a population of 680,000 as of 2003 and an area of 1,659 km². The locals speak a variation of the Taishan dialect.-Administration:...
County, Guangdong
Guangdong
Guangdong is a province on the South China Sea coast of the People's Republic of China. The province was previously often written with the alternative English name Kwangtung Province...
province, China. Kaiping together with its neighbouring counties of Enping
Enping
Enping is a county-level city in Guangdong Province, China and is part of the Siyi prefecture administered from Jiangmen city....
, Taishan
Taishan
Taishan is a coastal county-level city in Guangdong Province, China. The city is part of the Greater Taishan Region....
and Xinhui
Xinhui
Xinhui also known as 'Kuixiang'. Famous people born in what is now known as Xinhui include Liang Qichao, Chen Baisha, Chan Heung, and Michael Li from Westmead Hospital.-Geography:...
are collectively known as the "Four counties
Sze Yup
Sze Yup, Sze Yap, Seiyap refers to the four former counties of Xinhui, Taishan, Kaiping and Enping in the Pearl River Delta of southern Guangdong province, China. Xinhui is a city district and the other three are county-level cities, all four belong to Jiangmen prefecture administered from the...
" (it was from the four counties that many of the Chinese labourers to North America
North America
North America is a continent wholly within the Northern Hemisphere and almost wholly within the Western Hemisphere. It is also considered a northern subcontinent of the Americas...
, Australia
Australia
Australia , officially the Commonwealth of Australia, is a country in the Southern Hemisphere comprising the mainland of the Australian continent, the island of Tasmania, and numerous smaller islands in the Indian and Pacific Oceans. It is the world's sixth-largest country by total area...
, and Southeast Asia
Southeast Asia
Southeast Asia, South-East Asia, South East Asia or Southeastern Asia is a subregion of Asia, consisting of the countries that are geographically south of China, east of India, west of New Guinea and north of Australia. The region lies on the intersection of geological plates, with heavy seismic...
originated from).

The first towers were built during the early Qing Dynasty
Qing Dynasty
The Qing Dynasty was the last dynasty of China, ruling from 1644 to 1912 with a brief, abortive restoration in 1917. It was preceded by the Ming Dynasty and followed by the Republic of China....
, reaching a peak in the 1920s and 1930s, when there were more than three thousand of these structures. Today, approximately 1,833 diaolou remain standing in Kaiping, and approximately 500 in Taishan. Although the diaolou served mainly as protection against forays by bandits, a few of them also served as living quarters.

Kaiping has traditionally been a region of major emigration abroad, and a melting pot
Melting pot
The melting pot is a metaphor for a heterogeneous society becoming more homogeneous, the different elements "melting together" into a harmonious whole with a common culture...
of ideas and trends brought back by overseas Chinese
Overseas Chinese
Overseas Chinese are people of Chinese birth or descent who live outside the Greater China Area . People of partial Chinese ancestry living outside the Greater China Area may also consider themselves Overseas Chinese....
. As a result, many diaolou incorporate architectural features from China and from the West.

In 2007, UNESCO
UNESCO
The United Nations Educational, Scientific and Cultural Organization is a specialized agency of the United Nations...
named the Kaiping Diaolou and Villages (开平碉楼与村落) in China as a World Heritage Site
World Heritage Site
A UNESCO World Heritage Site is a place that is listed by the UNESCO as of special cultural or physical significance...
. UNESCO wrote, "...the Diaolou ... display a complex and flamboyant fusion of Chinese and Western structural and decorative forms. They reflect the significant role of émigré Kaiping people in the development of several countries in South Asia, Australasia, and North America, during the late 19th and early 20th centuries, and the close links between overseas Kaiping and their ancestral homes. The property inscribed here consists of four groups of Diaolou, totaling some 1,800 tower houses in their village settings."

Ruishi Diaolou, located behind Jinjiangli Village, Xianggang Township. Constructed in 1921, it has nine floors and is the highest diaolou at Kaiping. It features a Byzantine style roof and a Roman dome.

Li Garden, in Beiyi Xiang, was constructed in 1936 by Mr. Xie Weili, a Chinese emigrant to the United States.

Fangshi Denglou - Built in 1920 after contributions from villagers, this denglou is five stories high. It is referred to as the "Light Tower" because it had an enormous searchlight with a brightness much like that of the beam of a lighthouse.

Bianchouzhu Lou (The Leaning Tower), located in Nanxing Village was constructed in 1903. It has seven floors and overlooks a pond.

Tianlu Lou (Tower of Heavenly Success), located in Yong'an li, was built in 1922 and is seven storeys tall plus a roof top floor.