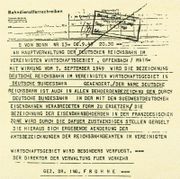 After World War II, each of the military governments of the Allied Occupation Zones in Germany
Allied Occupation Zones in Germany
The Allied powers who defeated Nazi Germany in World War II divided the country west of the Oder-Neisse line into four occupation zones for administrative purposes during 1945–49. In the closing weeks of fighting in Europe, US forces had pushed beyond the previously agreed boundaries for the...
was de facto in charge of the German railways in their respective territories. On 10 October 1946, the railways in the British and American occupation zone
Bizone
The Bizone, or Bizonia was the combination of the American and the British occupation zones in 1947 during the occupation of Germany after World War II. With the addition of the French occupation zone in March 1948, the entity became the Trizone...
s formed the Deutsche Reichsbahn im Vereinigten Wirtschaftsgebiet (German Imperial Railway in the united economic area), while on 25 June 1947, the provinces under French occupation formed the Südwestdeutsche Eisenbahn. With the formation of the FRG these successor organizations of the DRG were reunited, a situation codified by the Federal Railways Law (Bundesbahngesetz) that was ratified on 13 December 1951. The railways in the Saarland
Saarland
Saarland is one of the sixteen states of Germany. The capital is Saarbrücken. It has an area of 2570 km² and 1,045,000 inhabitants. In both area and population, it is the smallest state in Germany other than the city-states...
joined on 1 January 1957.

The DB was a state-owned company that, with few local exceptions, exercised a monopoly concerning rail transport throughout West Germany. The DB was placed under the control of the Bundesverkehrsministerium (Federal Transport Ministry). With its headquarters in Frankfurt
Frankfurt
Frankfurt am Main , commonly known simply as Frankfurt, is the largest city in the German state of Hesse and the fifth-largest city in Germany, with a 2010 population of 688,249. The urban area had an estimated population of 2,300,000 in 2010...
, in 1985 the DB was the third-largest employer in the FRG, with a strength of 322,383 employees. A special transit police (Bahnpolizei
Bahnpolizei
Bahnpolizei is the term in Germany, Austria and the German-speaking parts of Switzerland for the Railway police.-Germany:Bahnpolizei was the name of the former Railway police of West Germany and fell under the jurisdiction of the Deutsche Bundesbahn federal railway company...
) provided security. The catering needs of the DB were supplied by the “Deutsche Schlafwagen- und Speisewagengesellschaft” (DSG), later “Deutsche Service-Gesellschaft der Bahn”, as the former DRG caterer Mitropa
Mitropa
Mitropa is a catering company best known for having managed sleeping and dining cars of different German railways for most of the 20th century. Since its reorganization in 2002, the company only provides stationary food services for rail and road customers. The name Mitropa is a derivative of ""...
was situated in East Germany and serviced the Deutsche Reichsbahn in the GDR.

As West Berlin
West Berlin
West Berlin was a political exclave that existed between 1949 and 1990. It comprised the western regions of Berlin, which were bordered by East Berlin and parts of East Germany. West Berlin consisted of the American, British, and French occupation sectors, which had been established in 1945...
lay surrounded by the GDR, local and long-distance railway services in the divided city were provided exclusively by the DR, although the DB operated a ticket office in the Hardenbergstraße near the main West Berlin passenger station Zoologischer Garten
Berlin Zoologischer Garten railway station
Berlin Zoologischer Garten station was the central transport facility in West Berlin during the division of the city, and thereafter for the western central area of Berlin until opening of the new Berlin Central Station on 28 May 2006...
.

The immediate tasks in the early years after the end of World War II
World War II
World War II, or the Second World War , was a global conflict lasting from 1939 to 1945, involving most of the world's nations—including all of the great powers—eventually forming two opposing military alliances: the Allies and the Axis...
involved the reconstruction of the heavily damaged infrastructure and the replenishment of locomotives and rolling stock. Contrary to the Deutsche Reichsbahn
Deutsche Reichsbahn of the GDR
The Deutsche Reichsbahn or DR was the operating name of state owned railways in the German Democratic Republic ....
in the GDR, the DB was not subject to reparation
War reparations
War reparations are payments intended to cover damage or injury during a war. Generally, the term war reparations refers to money or goods changing hands, rather than such property transfers as the annexation of land.- History :...
s and benefited from the influx of capital through the Marshall Plan
Marshall Plan
The Marshall Plan was the large-scale American program to aid Europe where the United States gave monetary support to help rebuild European economies after the end of World War II in order to combat the spread of Soviet communism. The plan was in operation for four years beginning in April 1948...
. During the early years, new steam engines were constructed and placed into service. The last new steam locomotive type was the Class 10, which entered service in 1957. Only two units of class 10 were built. In 1959 DB took the last steam locomotive delivery when the last of the class 23 locomotives was delivered. Soon, with increase in mass motorization, the railway started to lose passenger volume. As a result rail buses
Railbus
A railbus is a very lightweight type passenger rail vehicle that shares many aspects of their construction with a bus, usually having a bus, or modified bus body, and having four wheels on a fixed base, instead of on bogies...
were introduced on some lines, while other smaller volume lines were closed. Main lines became increasingly electrified. The later years of this epoch saw a decrease and eventual phasing out of steam engines, with the last one to cease regular service in 1977. Traction was provided increasingly by diesel and electric engines. With increased use of diesel and electric locomotives, progress was made in decreasing travel time for passengers. New types of passenger trains were introduced such as the Trans Europ Express
Trans Europ Express
The Trans Europ Express, or Trans-Europe Express, is a former international railway service in Europe. At its maximum extent, in 1974, the network comprised 45 trains, connecting 130 different cities.-Origin:...
and the InterCity
Intercity (Deutsche Bahn)
Intercity is the second-highest train classification in Germany, after the ICE. Intercity services are loco-hauled express services, usually over long-distances. There are Intercity routes throughout Germany, and routes generally operate with a two-hour frequency, with multiple routes giving a more...
.

Transport of goods also had to compete with the ever increasing competition from trucks. Furthermore, traditional services such as coal and iron ore shipments declined with the changes in the overall economy.

After the introduction of the TGV
TGV
The TGV is France's high-speed rail service, currently operated by SNCF Voyages, the long-distance rail branch of SNCF, the French national rail operator....
in France, the ICE
InterCityExpress
The Intercity-Express or ICE is a system of high-speed trains predominantly running in Germany and neighbouring countries. It is the highest service category offered by DB Fernverkehr and is the flagship of Deutsche Bahn...
system of high speed passenger trains was developed. Significant stretches of new high speed track, like the Hanover-Würzburg high-speed rail line, had to be laid or upgraded. Other characteristics of this epoch are the introduction of computer systems and the steps taken towards an integrated system of European railways. Externally, rolling stock displayed more colourful and varied livery schemes.

The two German states were reunified
German reunification
German reunification was the process in 1990 in which the German Democratic Republic joined the Federal Republic of Germany , and when Berlin reunited into a single city, as provided by its then Grundgesetz constitution Article 23. The start of this process is commonly referred by Germans as die...
in October 1990 with both DB and DR now being special funds of the German Federal government. Article 26 of the Unification Treaty (Einigungsvertrag) stipulated the DR to be merged with DB at the earliest opportunity. The DB, in the interim, initiated new coordinations in businesses with the DR, started IC and ICE services into Berlin, and extended IC and ICE services to major cities in eastern Germany. Administratively, on June 1, 1992 the DB and DR formed a joint board of directors which governed both entities. However, the merger was delayed over the structure of merged railway due to concerns by German politicians on the ever-increasing annual operating deficits incurred by the DB and DR. After several years of delays, the Bundesverkehrsministerium proposed a comprehensive reform of the German railway system (Bahnreform) which was approved by the Bundestag
Bundestag
The Bundestag is a federal legislative body in Germany. In practice Germany is governed by a bicameral legislature, of which the Bundestag serves as the lower house and the Bundesrat the upper house. The Bundestag is established by the German Basic Law of 1949, as the successor to the earlier...
in 1993 and went into effect on 1 January 1994. At the heart of the reform package was a) the merger of the DB and the DR and b) the change of the form of the enterprise into a stock corporation. Nevertheless, the Deutsche Bahn AG was still publicly owned.


Presidents of the DB