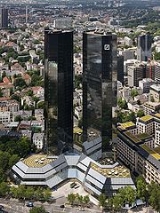 Encyclopedia
The Deutsche Bank Twin Towers (German: "Deutsche Bank Zwillingstürme" or "Deutsche-Bank-Hochhaus") consists of two skyscrapers that are each 155 meters high. They are also called debit and credit (Soll und Haben), or German bank called Twin Towers I and II. It is the headquarters of Deutsche Bank
Deutsche Bank
Deutsche Bank AG is a global financial service company with its headquarters in Frankfurt, Germany. It employs more than 100,000 people in over 70 countries, and has a large presence in Europe, the Americas, Asia Pacific and the emerging markets...
Group, located in the banking district in Frankfurt, Germany. It is one of the best known buildings in Germany
Germany
Germany , officially the Federal Republic of Germany , is a federal parliamentary republic in Europe. The country consists of 16 states while the capital and largest city is Berlin. Germany covers an area of 357,021 km2 and has a largely temperate seasonal climate...
because of its high media coverage.

The Taunusanlage
Taunusanlage station
Taunusanlage station is an underground S-Bahn station in central Frankfurt am Main, Germany. It is in the Westend district, close to Taunusanlage Park. The name Taunusanlage refers to a section of the now demolished city walls, named in the 19th century after the nearby Taunusbahnhof of the Taunus...
S-Bahn
Rhine-Main S-Bahn
The Rhine-Main S-Bahn system is an integrated rapid transit and commuter transport system for the Frankfurt/Rhine-Main region, which includes the cities Frankfurt am Main, Wiesbaden, Mainz, Offenbach am Main, Hanau and Darmstadt...
station is located at the foot of the building. The largest man-shaped monolith
Monolith
A monolith is a geological feature such as a mountain, consisting of a single massive stone or rock, or a single piece of rock placed as, or within, a monument...
of the world, created by the Swiss sculptor Max Bill
Max Bill
Max Bill was a Swiss architect, artist, painter, typeface designer, industrial designer and graphic designer.Bill was born in Winterthur...
, is located in front of the entrance.

The skyscraper was built from 1979 to 1984 according to designs by Walter Hanig, Heinz Scheid, and Johannes Schmidt. It stands on the Taunusanlage near the Old Opera House, at the beginning of the Mainzer Landstrasse, and the border districts of the West End, downtown and railway station district. The towers were originally planned as a hotel for the American Hyatt
Hyatt
Hyatt Hotels Corporation , is an international operator of hotels.Hyatt Center is the headquarters for Hyatt corporation...
Hotel Group. When taken as the towers of the Deutsche Bank, they were already under construction. Immediately outside the main entrance are the entrances to the underground train station Taunusanlage. South and east there is the green area of the city walls, the dramatic views of the buildings provide, to the west joins the axis of the tower at Mainzer Landstrasse (followed by a short distance between the skyscrapers of Trianon
Trianon (Frankfurt am Main)
Trianon is a skyscraper in Frankfurt am Main, Germany. It was completed in 1993, and topped out at 45 storeys. Atop the building is an upside-down pyramid suspended from the three corners. Trianon is currently used by the investment company DEKA as their headquarters, as well as by Linklaters and...
, Frankfurter Büro Center
Frankfurter Büro Center
The Frankfurt Büro Center is a skyscraper in the Westend of Frankfurt. The 142 meter high building stands on the Mainzer Landstrasse in the middle of a string of high-rises, which draws from the Republic Square to Opera Square...
and Westendstraße 1
Westendstraße 1
Westendstraße 1 is a well-known skyscraper in the Westend of Frankfurt. It was completed in 1993 and together with the City Haus, the headquarters of DZ Bank...
). To the north lies the Wilhelminian shaped residential West End, which is protected from further high-rise buildings.

The complex consists of three parts: a four-storey base building and the twin towers. The buildings are complete reinforced concrete structures with superior reflective glass facades.

In contrast to the neighboring high-rise Trianon, built a few years later, the pedestal of the Deutsche Bank skyscraper adapts to the urban environment. It's lower than the neighboring buildings, but spread out over a large base area. From the center of the plant (between the two towers) stretch on an irregular floor plan three components to the east, southwest and northwest. In both the horizontal and the vertical of 45 degrees has Fußbau many angles.

The two towers also have an irregular shape, but in both cases the same floor plan with many 45-degree angles and are symmetric arranged in 13 m distance to the center of the plant around.

The building has become a popular backdrop in print media and television as a symbol of the German economy, which contributed one hand, the distinctive twin-tower configuration, the other the role of Deutsche Bank as a centerpiece of Germany designated AG, close interpenetration big German companies.

The two towers share a 4660 m² large foundation slab, which is 4 m thick in the middle and tapers towards the edges to 2.5 meters. The panel consists of 16,122 m³ of reinforced concrete. The formation depth is approximately 13 m below ground level.

In 2006 it was decided the towers should be rebuilt due to changes in fire regulations. On this occasion, the German bank decided after 22 years of use to start a major upgrade, which began in December 2007 and will take about two and a half years. Not only the fire protection systems will be improved, but also the entire climate, water and lighting technology will be replaced. This will cause energy consumption and CO 2 emissions in the building to be reduced at least 50%. A Neuverglasung (re-glazing) with opening windows will improve the energy balance further. The goal is to certify the building as a green building according to American standard LEED certification with the highest platinum for existing buildings (Existing Buildings), and the German seal of approval DGNB.USGBC erhalten. The towers are the first high-rises to be given this certification by the USGBC. For the interior, the Bank has chosen the Milanese architect Mario Bellini
Mario Bellini
Mario Bellini is a world renowned Italian architect and designer.He graduated from the Milan Polytechnic - Faculty of Architecture in 1959 and began working as an architect himself in the early 1960s...
. During the construction work, approximately 2,500 employees will be relocated to three other locations in the relative vicinity of the towers, including the Investment Banking Center near the trade fair.