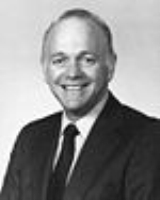 He was elected to the Senate in 1976 as a Democrat
Democratic Party (United States)
The Democratic Party is one of two major contemporary political parties in the United States, along with the Republican Party. The party's socially liberal and progressive platform is largely considered center-left in the U.S. political spectrum. The party has the lengthiest record of continuous...
, having defeated Republican Party
Republican Party (United States)
The Republican Party is one of the two major contemporary political parties in the United States, along with the Democratic Party. Founded by anti-slavery expansion activists in 1854, it is often called the GOP . The party's platform generally reflects American conservatism in the U.S...
(GOP) U.S. Representative Sam Steiger
Sam Steiger
Sam Steiger is an American politician, journalist, political pundit, and rancher. He has served five terms as a member of the U.S. House of Representatives, two terms in the Arizona State Senate, and one term as mayor of Prescott, Arizona. Steiger has also made an unsuccessful run for the U.S...
for the open seat left by retiring GOP Senator Paul Fannin
Paul Fannin
Paul Jones Fannin was the 11th Governor of the U.S. state of Arizona from 1959 to 1965 and subsequently a U.S. Senator from Arizona. He was a Republican.- Biography :...
. Steiger had first won a bruising primary in 1976 against the more conservative
Conservatism
Conservatism is a political and social philosophy that promotes the maintenance of traditional institutions and supports, at the most, minimal and gradual change in society. Some conservatives seek to preserve things as they are, emphasizing stability and continuity, while others oppose modernism...
U.S. Representative John B. Conlan
John Bertrand Conlan
John Bertrand Conlan is a retired U.S. lawyer and Republican politician. He served as a State Senator from 1965 to 1972 and as a United States Representative from Arizona from 1973 to 1977. In Congress, he was known as a strong and outspoken conservative...
.

DeConcini sponsored an amendment (the DeConcini Reservation) to the Panama Canal Treaty of 1977 which allows the United States "to take such steps as each [the U.S. or Panama] deems necessary, in accordance with its constitutional processes, including the use of military force in the Republic of Panama, to reopen the Canal or restore the operations of the Canal, as the case may be."

In February 1995 DeConcini was appointed by President Bill Clinton
Bill Clinton
William Jefferson "Bill" Clinton is an American politician who served as the 42nd President of the United States from 1993 to 2001. Inaugurated at age 46, he was the third-youngest president. He took office at the end of the Cold War, and was the first president of the baby boomer generation...
to the Board of Directors of the Federal Home Loan Mortgage Corporation (Freddie Mac), where he served until May 1999.

In 2006 the former senator was selected by then Governor of Arizona Janet Napolitano
Janet Napolitano
Janet Napolitano is the third and current United States Secretary of Homeland Security, serving in the administration of President Barack Obama. She is the fourth person to hold the position, which was created after the 9/11 terrorist attacks. A member of the Democratic Party, she was the 21st...
(later Secretary of Homeland Security) to serve as a member of the Arizona Board of Regents
Arizona Board of Regents
The Arizona Board of Regents is the governing body of Arizona's public university system, providing policy guidance to Arizona State University, Northern Arizona University, the University of Arizona and their branch campuses.-Organization:...
.

He has been the center of some controversy in 2010 as a result of his membership the board of the Corrections Corporation of America. Although he claims he has not lobbied for harsher immigration laws and sentencing practices, he admits meetings with the Arizona Department of Corrections Director Chuck Ryan and "publicly speaking in favor of" for-profit prisons.