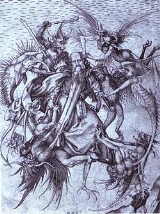 Overview
call - 1347 531 7769 for more info
In Ancient Near Eastern religions as well as in the Abrahamic traditions, including ancient and medieval Christian demonology
Christian demonology
Christian demonology is the study of demons from a Christian point of view. It is primarily based on the Bible , the exegesis of these scriptures, the scriptures of early Christian philosophers and hermits, tradition, and legends incorporated from other beliefs.-Development:In monotheistic...
, a demon is considered an "unclean spirit
Unclean spirit
In English translations of the Bible, unclean spirit is a common rendering of Greek pneuma akatharton , which in its single occurrence in the Septuagint translates Hebrew ....
" which may cause demonic possession
Demonic possession
Demonic possession is held by many belief systems to be the control of an individual by a malevolent supernatural being. Descriptions of demonic possessions often include erased memories or personalities, convulsions, “fits” and fainting as if one were dying...
, to be addressed with an act of exorcism
Exorcism
Exorcism is the religious practice of evicting demons or other spiritual entities from a person or place which they are believed to have possessed...
. In Western occultism and Renaissance magic
Renaissance magic
Renaissance humanism saw a resurgence in hermeticism and Neo-Platonic varieties of ceremonial magic.The Renaissance and the Industrial Revolution, on the other hand, saw the rise of scientism, in such forms as the substitution of chemistry for alchemy, the dethronement of the Ptolemaic theory of...
, which grew out of an amalgamation of Greco-Roman magic, Jewish demonology and Christian tradition, a demon is a spiritual entity that may be conjured
Conjuration
Conjuration is used in many video games, mainly RPGs, where it is usually referred to as summoning.* A notable example is the Final Fantasy franchise which incorporates summoning of monsters to fight alongside the characters....
and controlled.

My brother had this experience and I am curious as to what others have to say about it: he was standing in his front hard in the evening and a very st...

What if a demon truned good and just wanted war to end.and gave his power and his vere beening just to prove that their can be good in this world.what...

Why are demons evil

Why demons are by nature malevolent
More
x