Encyclopedia
This article is about the demographic
Demographics
Demographics are the most recent statistical characteristics of a population. These types of data are used widely in sociology , public policy, and marketing. Commonly examined demographics include gender, race, age, disabilities, mobility, home ownership, employment status, and even location...
features of the population
Population
A population is all the organisms that both belong to the same group or species and live in the same geographical area. The area that is used to define a sexual population is such that inter-breeding is possible between any pair within the area and more probable than cross-breeding with individuals...
of Bulgaria
Bulgaria
Bulgaria , officially the Republic of Bulgaria , is a parliamentary democracy within a unitary constitutional republic in Southeast Europe. The country borders Romania to the north, Serbia and Macedonia to the west, Greece and Turkey to the south, as well as the Black Sea to the east...
, including population density
Population density
Population density is a measurement of population per unit area or unit volume. It is frequently applied to living organisms, and particularly to humans...
, ethnicity
Ethnic group
An ethnic group is a group of people whose members identify with each other, through a common heritage, often consisting of a common language, a common culture and/or an ideology that stresses common ancestry or endogamy...
, education level, health of the populace, economic status, religious affiliations and other aspects of the population.

The interest for emigration was highest in the first years after the fall of Todor Zhivkov's regime and from 1989 to 1992 Bulgaria lost more than half million inhabitants. Thereafter the interest for emigration started reducing and now the population is comparatively stabilizing, the growth rate is again negative, but is much lower - in the past decade the country lost about 500 000 inhabitants, compared to more than 1 million in the previous decade. After the reduced emigrant interest, Bulgaria decrease with 20,000-30,000 people for a year, while some years after 1989 the country was decreasing with more than 150 000 people for a year. After the first EU census, held this year, the National Statistical Institute of Bulgaria for now gives only provisional result, which is 7,364,570 inhabitants, so to the publishing of the final data in July, 2011 is expected increasing. 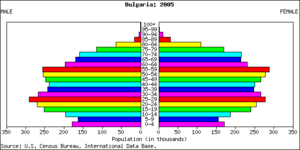 Orthodox Christian 85.6%,
Muslim
Muslim
A Muslim, also spelled Moslem, is an adherent of Islam, a monotheistic, Abrahamic religion based on the Quran, which Muslims consider the verbatim word of God as revealed to prophet Muhammad. "Muslim" is the Arabic term for "submitter" .Muslims believe that God is one and incomparable...
10.2%, Roman Catholic
Roman Catholicism in Bulgaria
Roman Catholicism is the third largest religious congregation in Bulgaria, after Eastern Orthodoxy and Islam. It has roots in the country since the Middle Ages and is part of the worldwide Roman Catholic Church, under the spiritual leadership of the Pope and curia in Rome.As an entity, the Catholic...
0.6%, Protestant
Protestantism in Bulgaria
Protestantism in Bulgaria: Protestantism is the fourth largest religious grouping in Bulgaria after Eastern Orthodoxy, Islam and Roman Catholicism. In the census of 2001, a total of 42,308 people declared themselves to be Protestants of different denominations, up from 21,878 in the previous census...
0.5%, other 0.2%, undeclared and not shown 2.9% (2011 census)

Bulgarian
Bulgarian language
Bulgarian is an Indo-European language, a member of the Slavic linguistic group.Bulgarian, along with the closely related Macedonian language, demonstrates several linguistic characteristics that set it apart from all other Slavic languages such as the elimination of case declension, the...
87.5%, Turkish
Turkish language
Turkish is a language spoken as a native language by over 83 million people worldwide, making it the most commonly spoken of the Turkic languages. Its speakers are located predominantly in Turkey and Northern Cyprus with smaller groups in Iraq, Greece, Bulgaria, the Republic of Macedonia, Kosovo,...
8.6%, Roma 2.1%, other and unspecified 1.8% (2011 census)

The 2011 census defines an ethnic group as a "community of people, related to each other by origin and language, and close to each other by mode of life and culture"; and one's mother tongue as "the language a person speaks best and usually uses for communication in the family (household)".