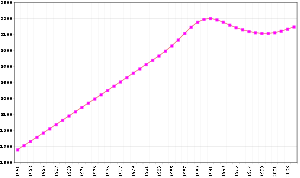 This article is about the demographic
Demographics
Demographics are the most recent statistical characteristics of a population. These types of data are used widely in sociology , public policy, and marketing. Commonly examined demographics include gender, race, age, disabilities, mobility, home ownership, employment status, and even location...
features of the population
Population
A population is all the organisms that both belong to the same group or species and live in the same geographical area. The area that is used to define a sexual population is such that inter-breeding is possible between any pair within the area and more probable than cross-breeding with individuals...
of Albania
Albania
Albania , officially known as the Republic of Albania , is a country in Southeastern Europe, in the Balkans region. It is bordered by Montenegro to the northwest, Kosovo to the northeast, the Republic of Macedonia to the east and Greece to the south and southeast. It has a coast on the Adriatic Sea...
, including population density
Population density
Population density is a measurement of population per unit area or unit volume. It is frequently applied to living organisms, and particularly to humans...
, ethnicity
Ethnic group
An ethnic group is a group of people whose members identify with each other, through a common heritage, often consisting of a common language, a common culture and/or an ideology that stresses common ancestry or endogamy...
, education level, health of the populace, economic status, religious affiliations and other aspects of the population.

Albanian
Albanians
Albanians are a nation and ethnic group native to Albania and neighbouring countries. They speak the Albanian language. More than half of all Albanians live in Albania and Kosovo...
: 95%
Greek
Greeks
The Greeks, also known as the Hellenes , are a nation and ethnic group native to Greece, Cyprus and neighboring regions. They also form a significant diaspora, with Greek communities established around the world....
: 3%
other: 2% Aromanians
Aromanians
Aromanians are a Latin people native throughout the southern Balkans, especially in northern Greece, Albania, the Republic of Macedonia, Bulgaria, and as an emigrant community in Serbia and Romania . An older term is Macedo-Romanians...
(Vlachs
Vlachs
Vlach is a blanket term covering several modern Latin peoples descending from the Latinised population in Central, Eastern and Southeastern Europe. English variations on the name include: Walla, Wlachs, Wallachs, Vlahs, Olahs or Ulahs...
), Roma (Gypsy), Serbs
Serbs
The Serbs are a South Slavic ethnic group of the Balkans and southern Central Europe. Serbs are located mainly in Serbia, Montenegro and Bosnia and Herzegovina, and form a sizable minority in Croatia, the Republic of Macedonia and Slovenia. Likewise, Serbs are an officially recognized minority in...
, Macedonians
Macedonians (ethnic group)
The Macedonians also referred to as Macedonian Slavs: "... the term Slavomacedonian was introduced and was accepted by the community itself, which at the time had a much more widespread non-Greek Macedonian ethnic consciousness...
,

Vlachs (Aromanians) live in the south of the country, whereas Serbs
Serbs
The Serbs are a South Slavic ethnic group of the Balkans and southern Central Europe. Serbs are located mainly in Serbia, Montenegro and Bosnia and Herzegovina, and form a sizable minority in Croatia, the Republic of Macedonia and Slovenia. Likewise, Serbs are an officially recognized minority in...
/Montenegrins live in the north.

As conducting a satisfactory census of ethnic minorities is one of the country's commitments to the European Union
European Union
The European Union is an economic and political union of 27 independent member states which are located primarily in Europe. The EU traces its origins from the European Coal and Steel Community and the European Economic Community , formed by six countries in 1958...
, the Albanian government intends to conduct an official census to clarify the ethnic composition of the population in 2012. The last census to include data on ethnic minorities was conducted in 1989 under the communist regime. The latest census conducted in 2001 did not collect information about ethnic groups and nationalities in the population.

Albanian
Albanian language
Albanian is an Indo-European language spoken by approximately 7.6 million people, primarily in Albania and Kosovo but also in other areas of the Balkans in which there is an Albanian population, including western Macedonia, southern Montenegro, southern Serbia and northwestern Greece...
(official – generally based on Tosk
Tosk Albanian
Tosk is the southern dialect of the Albanian language. The line of demarcation between Tosk and Gheg is the Shkumbin River. Tosk is the basis of the standard Albanian language.- Tosks :...
dialect and enriched with Gheg lexicon), Greek
Greek language
Greek is an independent branch of the Indo-European family of languages. Native to the southern Balkans, it has the longest documented history of any Indo-European language, spanning 34 centuries of written records. Its writing system has been the Greek alphabet for the majority of its history;...
, Aromanian
Aromanian language
Aromanian , also known as Macedo-Romanian, Arumanian or Vlach is an Eastern Romance language spoken in Southeastern Europe...
, Macedonian
Macedonian language
Macedonian is a South Slavic language spoken as a first language by approximately 2–3 million people principally in the region of Macedonia but also in the Macedonian diaspora...
, and Romani
Romani language
Romani or Romany, Gypsy or Gipsy is any of several languages of the Romani people. They are Indic, sometimes classified in the "Central" or "Northwestern" zone, and sometimes treated as a branch of their own....
.