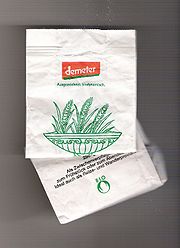 Demeter International is the largest certification organization for biodynamic agriculture
Biodynamic agriculture
Biodynamic agriculture is a method of organic farming that emphasizes the holistic development and interrelationships of the soil, plants and animals as a self-sustaining system. Biodynamic farming has much in common with other organic approaches, such as emphasizing the use of manures and composts...
, and is one of three predominant organic certifiers. Its name is a reference to Demeter
Demeter
In Greek mythology, Demeter is the goddess of the harvest, who presided over grains, the fertility of the earth, and the seasons . Her common surnames are Sito as the giver of food or corn/grain and Thesmophoros as a mark of the civilized existence of agricultural society...
, the Greek
Greek mythology
Greek mythology is the body of myths and legends belonging to the ancient Greeks, concerning their gods and heroes, the nature of the world, and the origins and significance of their own cult and ritual practices. They were a part of religion in ancient Greece...
goddess
Goddess
A goddess is a female deity. In some cultures goddesses are associated with Earth, motherhood, love, and the household. In other cultures, goddesses also rule over war, death, and destruction as well as healing....
of grain
GRAIN
GRAIN is a small international non-profit organisation that works to support small farmers and social movements in their struggles for community-controlled and biodiversity-based food systems. Our support takes the form of independent research and analysis, networking at local, regional and...
and fertility
Fertility
Fertility is the natural capability of producing offsprings. As a measure, "fertility rate" is the number of children born per couple, person or population. Fertility differs from fecundity, which is defined as the potential for reproduction...
. Demeter Biodynamic Certification is used in over 50 countries to verify that biodynamic products meet international standards in production and processing. The Demeter certification program was established in 1928, and as such was the first ecological label for organically produced foods.

The certification is the oldest traditional organic certification in Europe and is regarded as the highest grade of organic farming in the world. Certification is difficult to come by and must be renewed annually. Demeter’s “biodynamic” certification requires biodiversity and ecosystem preservation, soil husbandry, livestock integration, prohibition of genetically engineered organisms and viewing the farm as a living “holistic organism”. The certification verifies the fulfillment of the standards on behalf of the farmers, which in turn guarantees high quality food products to the consumers. This is rewarded by receiving a higher price for food certified with the “Demeter” label, ranging from 10-30% on average.
The source of this article is wikipedia, the free encyclopedia.  The text of this article is licensed under the GFDL.