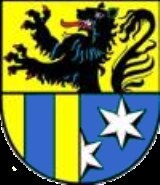 After the 1815 Congress of Vienna
Congress of Vienna
The Congress of Vienna was a conference of ambassadors of European states chaired by Klemens Wenzel von Metternich, and held in Vienna from September, 1814 to June, 1815. The objective of the Congress was to settle the many issues arising from the French Revolutionary Wars, the Napoleonic Wars,...
Saxony had to cede large amounts of its territory to Prussia
Prussia
Prussia was a German kingdom and historic state originating out of the Duchy of Prussia and the Margraviate of Brandenburg. For centuries, the House of Hohenzollern ruled Prussia, successfully expanding its size by way of an unusually well-organized and effective army. Prussia shaped the history...
. The Prussian government established districts in the newly acquired lands, among them the district of Delitzsch.

The state of Prussia was dissolved after the end of the Nazi era
Nazi Germany
Nazi Germany , also known as the Third Reich , but officially called German Reich from 1933 to 1943 and Greater German Reich from 26 June 1943 onward, is the name commonly used to refer to the state of Germany from 1933 to 1945, when it was a totalitarian dictatorship ruled by...
, and the new state of Saxony-Anhalt
Saxony-Anhalt
Saxony-Anhalt is a landlocked state of Germany. Its capital is Magdeburg and it is surrounded by the German states of Lower Saxony, Brandenburg, Saxony, and Thuringia.Saxony-Anhalt covers an area of...
was established, with Delitzsch being a part of it. In 1953 the East German government dissolved the states. They were reestablished after the German reunification
German reunification
German reunification was the process in 1990 in which the German Democratic Republic joined the Federal Republic of Germany , and when Berlin reunited into a single city, as provided by its then Grundgesetz constitution Article 23. The start of this process is commonly referred by Germans as die...
in 1990, but Delitzsch and Eilenburg (two districts made up of the former Delitzsch district) were initially given to Saxony instead of Saxony-Anhalt. The two districts again merged in 1994 and formed the present borders.

The district was located in the triangle between the metropolises of Leipzig
Leipzig
Leipzig Leipzig has always been a trade city, situated during the time of the Holy Roman Empire at the intersection of the Via Regia and Via Imperii, two important trade routes. At one time, Leipzig was one of the major European centres of learning and culture in fields such as music and publishing...
, Halle
Halle, Saxony-Anhalt
Halle is the largest city in the German state of Saxony-Anhalt. It is also called Halle an der Saale in order to distinguish it from the town of Halle in North Rhine-Westphalia...
and Bitterfeld
Bitterfeld
Bitterfeld is a town in the district Anhalt-Bitterfeld, Saxony-Anhalt, Germany. Since 1 July 2007 it has been part of the town Bitterfeld-Wolfen. It is situated approx. 25 km south of Dessau, and 30 km northeast of Halle...
. It consists of plain countryside, which is mainly agriculturally used. There is low urbanisation throughout the district. The Mulde
Mulde
The Mulde is a river in Saxony and Saxony-Anhalt, Germany. It is a left tributary of the Elbe and 124 km in length.The river is formed by the confluence, near Colditz, of the Zwickauer Mulde and the Freiberger Mulde , both rising from the Ore Mountains...
River runs through the easternmost part of the district. On the eastern banks there is the Düben Heath (Dübener Heide), a nature park extending from here to the east and to the north.