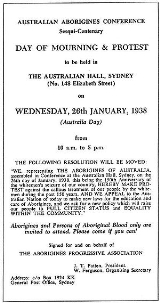 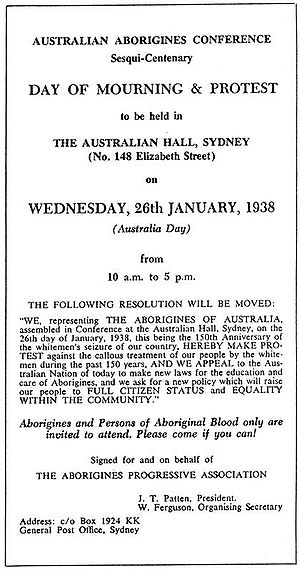 The Day of Mourning was a day of protest held by Aboriginal Australians on 26 January 1938, the sesquicentenary of British
United Kingdom
The United Kingdom of Great Britain and Northern IrelandIn the United Kingdom and Dependencies, other languages have been officially recognised as legitimate autochthonous languages under the European Charter for Regional or Minority Languages...
colonisation
Colonisation
Colonization occurs whenever any one or more species populate an area. The term, which is derived from the Latin colere, "to inhabit, cultivate, frequent, practice, tend, guard, respect", originally related to humans. However, 19th century biogeographers dominated the term to describe the...
of Australia
Australia
Australia , officially the Commonwealth of Australia, is a country in the Southern Hemisphere comprising the mainland of the Australian continent, the island of Tasmania, and numerous smaller islands in the Indian and Pacific Oceans. It is the world's sixth-largest country by total area...
. It was declared to be a protest of 150 years of callous treatment and the seizure of land, and was designed to stand in contrast to the Australia Day
Australia Day
Australia Day is the official national day of Australia...
celebrations held by the European population on the same day.

The Day of Mourning protests were organised by the Australian Aborigines League (AAL), based in Victoria
Victoria (Australia)
Victoria is the second most populous state in Australia. Geographically the smallest mainland state, Victoria is bordered by New South Wales, South Australia, and Tasmania on Boundary Islet to the north, west and south respectively....
and led by William Cooper
William Cooper (Aboriginal Australian)
William Cooper was an Australian Aboriginal leader.-Early life:Born in Yorta Yorta territory around the intersection of the Murray and Goulburn Rivers in Victoria, Australia, he was forced to work for a variety of pastoral employers...
, and the Aborigines Progressive Association
Aborigines Progressive Association
The Aborigines Progressive Association, was established in 1937 by William Ferguson, Pearl Gibbs and Jack Patten in Dubbo, New South Wales. Ferguson and Gibbs led a group in the western part of the state, while Patten assemble an alliance of activists in the north-east...
(APA), based in New South Wales
New South Wales
New South Wales is a state of :Australia, located in the east of the country. It is bordered by Queensland, Victoria and South Australia to the north, south and west respectively. To the east, the state is bordered by the Tasman Sea, which forms part of the Pacific Ocean. New South Wales...
and led by Jack Patten
Jack Patten
John Thomas Patten , known as Jack Patten was an Australian Aboriginal activist and journalist.-Biography:...
. In 1888, the centenary of British colonisation, Aboriginal leaders had simply boycotted the Australia Day celebrations. However, this had been ignored by the media. These groups had also sent petitions to the Government of Australia
Government of Australia
The Commonwealth of Australia is a federal constitutional monarchy under a parliamentary democracy. The Commonwealth of Australia was formed in 1901 as a result of an agreement among six self-governing British colonies, which became the six states...
and the Government of the United Kingdom, in the early 1930s, for the recognition of Aboriginal civil rights (including Aboriginal representation in the Parliament of Australia
Parliament of Australia
The Parliament of Australia, also known as the Commonwealth Parliament or Federal Parliament, is the legislative branch of the government of Australia. It is bicameral, largely modelled in the Westminster tradition, but with some influences from the United States Congress...
), but they had been ignored or dismissed without serious attention, and each had refused to pass the petitions on to King George V
George V of the United Kingdom
George V was King of the United Kingdom and the British Dominions, and Emperor of India, from 6 May 1910 through the First World War until his death in 1936....
. As a result, a more proactive event was planned for the sesquicentenary, which the media and governments could not ignore. This was despite recent experience of the New South Wales Police
New South Wales Police
The New South Wales Police Force is the primary law enforcement agency in the State of New South Wales, Australia. It is an agency of the Government of New South Wales within the New South Wales Ministry for Police...
engaging in general intimidation of public meetings of such political organisations.

Despite having rejected the APA's petition, Prime Minister
Prime Minister of Australia
The Prime Minister of the Commonwealth of Australia is the highest minister of the Crown, leader of the Cabinet and Head of Her Majesty's Australian Government, holding office on commission from the Governor-General of Australia. The office of Prime Minister is, in practice, the most powerful...
Joseph Lyons
Joseph Lyons
Joseph Aloysius Lyons, CH was an Australian politician. He was Labor Premier of Tasmania from 1923 to 1928 and a Minister in the James Scullin government from 1929 until his resignation from the Labor Party in March 1931...
did agree to meet with the Day of Mourning leaders on 25 January, without any other government officials or media present. However, some media reports at the time attributed this more to Lyons' desire to meet Pastor Doug Nicholls, who was an Australian rules football
Australian rules football
Australian rules football, officially known as Australian football, also called football, Aussie rules or footy is a sport played between two teams of 22 players on either...
player for Fitzroy Football Club
Fitzroy Football Club
The Fitzroy Football Club, formerly nicknamed The Lions, is an Australian rules football club formed in 1883 to represent the inner Melbourne suburb of Fitzroy, Victoria and was a foundation member club of the Victorian Football League on its inception in 1897...
at the time, than to any desire to constructively negotiate.

The day began with a march through the streets of Sydney, which was attended by both Aboriginal people and non-Indigenous supporters. The march began at the Sydney Town Hall
Sydney Town Hall
The Sydney Town Hall is a landmark sandstone building located in the heart of Sydney. It stands opposite the Queen Victoria Building and alongside St Andrew's Cathedral...
, and concluded at the major event on the day, the Day of Mourning Congress, a political meeting for Aboriginal people only. It attracted many major Aboriginal leaders, including Pearl Gibbs
Pearl Gibbs
Pearl Gibbs was an Indigenous Australian activist, and the most prominent female activist within the Aboriginal movement in the early 20th century...
and Margaret Tucker
Margaret Tucker
Margaret Lilardia Tucker was an Indigenous Australian activist and writer.Margaret Tucker was born at Warrangesda Mission to William Clements, a Wiradjuri man and Teresa Clements, née Middleton, a Yulupna women...
. The protesters had originally intended to hold the Congress in the Sydney Town Hall, but they were refused access, and instead held it at the nearby Australian Hall in Elizabeth Street. They were not allowed in through the front door and were told they could only enter through the rear door. The Congress was open to all Aboriginal people, and about 1,000 people attended, making it one of the first mass civil rights gatherings. The APA and AAL distributed a manifesto at the meeting, Aborigines Claim Citizens' Rights, produced by Patten and APA secretary William Ferguson
William Ferguson (Australian Aboriginal leader)
William Ferguson was an Indigenous Australian leader.He was born at Darlington Point, Waddai, New South Wales, and worked as a shearer, labourer and mailman in the west of the State. His first political involvements were as an organiser of shearers for the Australian Workers Union and then...
. The manifesto opened with a declaration that "This festival of 150 years' so-called 'progress' in Australia commemorates also 150 years of misery and degradation imposed on the original native inhabitants by white invaders of this country."

At the Congress, the following resolution was passed unanimously:

"WE, representing THE ABORIGINES OF AUSTRALIA, assembled in Conference at the Australian Hall, Sydney, on the 26th day of January, 1938, this being the 150th anniversary of the whitemen's seizure of our country, HEREBY MAKE PROTEST against the callous treatment of our people by the whitemen in the past 150 years, AND WE APPEAL to the Australian Nation to make new laws for the education and care of Aborigines, and for a new policy which will raise our people to FULL CITIZEN STATUS and EQUALITY WITHIN THE COMMUNITY."

In order to celebrate Australia Day, the Government of New South Wales
Government of New South Wales
The form of the Government of New South Wales is prescribed in its Constitution, which dates from 1856, although it has been amended many times since then...
had planned to reenact the arrival of the First Fleet
First Fleet
The First Fleet is the name given to the eleven ships which sailed from Great Britain on 13 May 1787 with about 1,487 people, including 778 convicts , to establish the first European colony in Australia, in the region which Captain Cook had named New South Wales. The fleet was led by Captain ...
in Port Jackson
Port Jackson
Port Jackson, containing Sydney Harbour, is the natural harbour of Sydney, Australia. It is known for its beauty, and in particular, as the location of the Sydney Opera House and Sydney Harbour Bridge...
. However, all the Aboriginal political organisations in Sydney refused to participate. In response, the Government removed a group of Aboriginal men from an reserve
Reserve
-Economic:* Official gold reserves, held by central banks as a store of value* Foreign exchange reserves, the foreign currency deposits held by central banks and monetary authorities...
in the west of the state, and brought them to Sydney. The men were kept overnight in the stable
Stable
A stable is a building in which livestock, especially horses, are kept. It most commonly means a building that is divided into separate stalls for individual animals...
s at the police barracks in Redfern
Redfern, New South Wales
Redfern is an inner-city suburb of Sydney. Redfern is 3 kilometres south of the Sydney central business district and is part of the local government area of the City of Sydney...
. On Australia Day, they were taken to a beach at Farm Cove
Farm Cove, New South Wales
Farm Cove is a tidal inlet and shallow bay in Sydney Harbour, separated from Sydney Cove by Bennelong Point . Known to the indigenous inhabitants of Sydney as Woccanmagully, Farm Cove was used by them as an initiation ground and for the "Kangaroo and Dog Dance".The land immediately adjacent to Farm...
, where they were told to run up the beach, to convey the impression that they were fleeing in fear from the British.

The reenactments attracted heavy criticism from the Day of Mourning protesters, who were not allowed to visit the men from the reserve when they were staying at Redfern. However, the Sydney media focused more on the fact that convict
Convict
A convict is "a person found guilty of a crime and sentenced by a court" or "a person serving a sentence in prison", sometimes referred to in slang as simply a "con". Convicts are often called prisoners or inmates. Persons convicted and sentenced to non-custodial sentences often are not termed...
s had been excised from the reenactment.

In 1998, a reenactment of the original Day of Mourning was held to commemorate the sixtieth anniversary of the protest. About four hundred protesters marched in silence along the original route of the march. Descendants of the original protesters read their speeches, and the ten main grievances in the Congress' manifesto were re-affirmed. The reenactment was accompanied by a campaign to protect the Australian Hall, the location of the 1938 Congress. The Government of New South Wales
Government of New South Wales
The form of the Government of New South Wales is prescribed in its Constitution, which dates from 1856, although it has been amended many times since then...
had placed a conservation order on it, but exceptions to the order allowed everything but the façade to be demolished. The building is now permanently protected.
The source of this article is wikipedia, the free encyclopedia.  The text of this article is licensed under the GFDL.