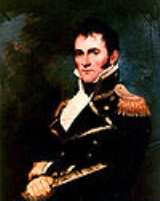 Born at Boston, Massachusetts, Porter served in the Quasi-War
Quasi-War
The Quasi-War was an undeclared war fought mostly at sea between the United States and French Republic from 1798 to 1800. In the United States, the conflict was sometimes also referred to as the Franco-American War, the Pirate Wars, or the Half-War.-Background:The Kingdom of France had been a...
with France first as midshipman
Midshipman
A midshipman is an officer cadet, or a commissioned officer of the lowest rank, in the Royal Navy, United States Navy, and many Commonwealth navies. Commonwealth countries which use the rank include Australia, New Zealand, South Africa, India, Pakistan, Singapore, Sri Lanka and Kenya...
on board , participating in the capture of L’Insurgente February 9, 1799; secondly, as 1st lieutenant
First Lieutenant
First lieutenant is a military rank and, in some forces, an appointment.The rank of lieutenant has different meanings in different military formations , but the majority of cases it is common for it to be sub-divided into a senior and junior rank...
of and later in command of USS Amphitheatre. During the Barbary Wars
Barbary Wars
The Barbary Wars were a series of wars between the United States of America and the Barbary States of North Africa in the late 18th and early 19th centuries. At issue was the Barbary pirates' demand of tribute from American merchant vessels in the Mediterranean Sea. If ships failed to pay, pirates...
(1801–07) Porter was 1st lieutenant of , and and was taken prisoner when Philadelphia ran aground in Tripoli
Tripoli
Tripoli is the capital and largest city in Libya. It is also known as Western Tripoli , to distinguish it from Tripoli, Lebanon. It is affectionately called The Mermaid of the Mediterranean , describing its turquoise waters and its whitewashed buildings. Tripoli is a Greek name that means "Three...
harbor October 31, 1803. After his release on June 3, 1805, he remained in the Mediterranean as acting captain of and later captain of Enterprise.

He was in charge of the naval forces at New Orleans 1808–10. As commander of in the War of 1812
War of 1812
The War of 1812 was a military conflict fought between the forces of the United States of America and those of the British Empire. The Americans declared war in 1812 for several reasons, including trade restrictions because of Britain's ongoing war with France, impressment of American merchant...
, Captain Porter achieved fame by capturing the first British warship of the conflict, , August 13, 1812 as well as several merchantmen. In 1813 he sailed Essex around Cape Horn
Cape Horn
Cape Horn is the southernmost headland of the Tierra del Fuego archipelago of southern Chile, and is located on the small Hornos Island...
and cruised in the Pacific warring on British whalers. On March 28, 1814 Porter was forced to surrender to Captain James Hillyar
James Hillyar
Admiral Sir James Hillyar KCB KCH was a prominent British Royal Navy officer of the early nineteenth century, who is best known for his service in the frigate HMS Phoebe during the Napoleonic Wars and the War of 1812...
off Valparaíso
Valparaíso
Valparaíso is a city and commune of Chile, center of its third largest conurbation and one of the country's most important seaports and an increasing cultural center in the Southwest Pacific hemisphere. The city is the capital of the Valparaíso Province and the Valparaíso Region...
after an engagement with the frigate and the sloop
Sloop
A sloop is a sail boat with a fore-and-aft rig and a single mast farther forward than the mast of a cutter....
, when his ship became too disabled to offer any resistance.

From 1815 to 1822, he was a member of the Board of Navy Commissioners
Board of Navy Commissioners
The Board of Naval Commissioners was a United States Navy administrative body in existence from 1815 to 1842, with responsibility for the Navy's material support. The three-member Board was created as part of an expansion of the U.S. Navy Department at the end of the War of 1812. The system was...
but gave up this post to command the expedition for suppressing piracy in the West Indies 1823–25. While in the West Indies suppressing piracy
Piracy
Piracy is an act of robbery or criminal violence at sea. The term can include acts committed on land, in the air, or in other major bodies of water or on a shore. It does not normally include crimes committed against persons traveling on the same vessel as the perpetrator...
, Porter invaded the town of Fajardo, Puerto Rico
Fajardo, Puerto Rico
Fajardo is a small city in Puerto Rico located in the east region of the island, bordering the Atlantic Ocean, north of Ceiba and east of Luquillo.Fajardo is spread over 7 wards and Downtown Fajardo , which serves as the administrative center of the city...
(a Spanish colony) to avenge the jailing of an officer from his fleet. The American government did not sanction Porter's act, and he was court-martial
Court-martial
A court-martial is a military court. A court-martial is empowered to determine the guilt of members of the armed forces subject to military law, and, if the defendant is found guilty, to decide upon punishment.Most militaries maintain a court-martial system to try cases in which a breach of...
ed upon his return to the U.S. Porter resigned and in 1826 entered the Mexican Navy as its commander-in-chief 1826–29.
He left the Mexican service in 1829 and was appointed United States Minister to the Barbary States
Barbary Coast
The Barbary Coast, or Barbary, was the term used by Europeans from the 16th until the 19th century to refer to much of the collective land of the Berber people. Today, the terms Maghreb and "Tamazgha" correspond roughly to "Barbary"...
. He died on March 3, 1843 while serving as United States Ambassador to Turkey
United States Ambassador to Turkey
The United States of America has maintained many high level contacts with Turkey since the nineteenth century.-Chargé d'Affaires:*George W. Erving *David Porter -Minister Resident:*David Porter *Dabney Smith Carr...
. He was buried in the cemetery of the Philadelphia Naval Asylum
Philadelphia Naval Asylum
The Philadelphia Naval Asylum, later the Naval Home, was a hospital, the Philadelphia Naval School, and a home for retired sailors for the United States Navy from 1834 to 1976, located in Philadelphia, Pennsylvania....
, and then in 1845 reburied in the Woodlands Cemetery in Philadelphia, Pennsylvania
Pennsylvania
The Commonwealth of Pennsylvania is a U.S. state that is located in the Northeastern and Mid-Atlantic regions of the United States. The state borders Delaware and Maryland to the south, West Virginia to the southwest, Ohio to the west, New York and Ontario, Canada, to the north, and New Jersey to...
. Portersville was named after him, and henceafterwards renamed "Valparaíso" after Valparaíso, Chile, where he fought during the War of 1812.

Porter married Evalina Anderson, and they had 10 children who survived, including six sons.

The older David Porter Sr. met and befriended another naval veteran of the Revolution
American Revolutionary War
The American Revolutionary War , the American War of Independence, or simply the Revolutionary War, began as a war between the Kingdom of Great Britain and thirteen British colonies in North America, and ended in a global war between several European great powers.The war was the result of the...
, George Farragut, from Spanish Minorca. In late spring 1808, David Porter Sr. suffered sunstroke, and Farragut took him into his home, where his wife Elizabeth cared for him. Already weakened by tuberculosis
Tuberculosis
Tuberculosis, MTB, or TB is a common, and in many cases lethal, infectious disease caused by various strains of mycobacteria, usually Mycobacterium tuberculosis. Tuberculosis usually attacks the lungs but can also affect other parts of the body...
, he died on June 22, 1808. Elizabeth Farragut died of yellow fever
Yellow fever
Yellow fever is an acute viral hemorrhagic disease. The virus is a 40 to 50 nm enveloped RNA virus with positive sense of the Flaviviridae family....
the same day. Motherless, the Farragut children were to be placed with friends and relatives.

While visiting Farragut and his family a short time later to express thanks for their care of his father and sympathy for their loss, Commodore Porter offered to take eight-year-old James Glasgow Farragut
David Farragut
David Glasgow Farragut was a flag officer of the United States Navy during the American Civil War. He was the first rear admiral, vice admiral, and admiral in the United States Navy. He is remembered in popular culture for his order at the Battle of Mobile Bay, usually paraphrased: "Damn the...
into his own household. Young James readily agreed. In 1809 he moved with Porter to Washington, where he met Secretary of the Navy Paul Hamilton and expressed his wish for a midshipman's appointment. Hamilton promised that the appointment would be made as soon as he reached the age of ten; as it happened, the commission came through on December 17, 1810, six months before the boy reached his tenth birthday. When James went to sea soon after with his adoptive father, he changed his name from James to David, and it is as David Glasgow Farragut that he is remembered.

The town of Porter
Porter, Indiana
Porter is a town in Westchester Township, Porter County, Indiana, United States. The population was 4,972 at the 2000 census.Porter is noted for its proximity to the Indiana Dunes State Park and for its railroad heritage...
and Porter County
Porter County, Indiana
Porter County is a county located in the U.S. state of Indiana. As of 2010, the population was 164,343. Much of the population growth has to do with the expansion of the Chicago Metropolitan Area eastward into Indiana. The county seat is Valparaiso...
in Northwest Indiana
Northwest Indiana
Northwest Indiana, also known as the South Shore and The Calumet Region or simply The Region, comprises Lake, Porter, LaPorte, Newton and Jasper counties in Indiana. This region neighbors Lake Michigan and is part of the Chicago metropolitan area...
are named after David Porter. In 1836 the county seat of Porter County, Indiana was originally named Portersville, also named for David Porter. It was changed to Valparaiso
Valparaiso, Indiana
Valparaiso is a city in and the county seat of Porter County, Indiana, United States. The population was 31,730 at the 2010 census, making it the 2nd largest city in Porter County.-History:...
in 1837, named for Porter's participation in the naval action near Valparaíso, Chile during the War of 1812.