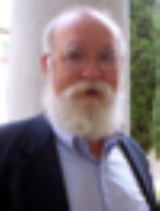 Overview
Daniel Clement Dennett is an American philosopher, writer
Writer
A writer is a person who produces literature, such as novels, short stories, plays, screenplays, poetry, or other literary art. Skilled writers are able to use language to portray ideas and images....
and cognitive scientist whose research centers on the philosophy of mind
Philosophy of mind
Philosophy of mind is a branch of philosophy that studies the nature of the mind, mental events, mental functions, mental properties, consciousness and their relationship to the physical body, particularly the brain. The mind-body problem, i.e...
, philosophy of science
Philosophy of science
The philosophy of science is concerned with the assumptions, foundations, methods and implications of science. It is also concerned with the use and merit of science and sometimes overlaps metaphysics and epistemology by exploring whether scientific results are actually a study of truth...
and philosophy of biology
Philosophy of biology
The philosophy of biology is a subfield of philosophy of science, which deals with epistemological, metaphysical, and ethical issues in the biological and biomedical sciences...
, particularly as those fields relate to evolutionary biology and cognitive science
Cognitive science
Cognitive science is the interdisciplinary scientific study of mind and its processes. It examines what cognition is, what it does and how it works. It includes research on how information is processed , represented, and transformed in behaviour, nervous system or machine...
. He is currently the Co-director of the Center for Cognitive Studies, the Austin B. Fletcher Professor of Philosophy, and a University Professor at Tufts University
Tufts University
Tufts University is a private research university located in Medford/Somerville, near Boston, Massachusetts. It is organized into ten schools, including two undergraduate programs and eight graduate divisions, on four campuses in Massachusetts and on the eastern border of France...
. Dennett is a firm atheist and secularist
Secularism
Secularism is the principle of separation between government institutions and the persons mandated to represent the State from religious institutions and religious dignitaries...
, a member of the Secular Coalition for America
Secular Coalition for America
The Secular Coalition for America is an advocacy group located in Washington D.C., representing atheists, humanists, freethinkers, agnostics, and other non-theistic people with a naturalistic worldview in American politics. Sean Faircloth, a five-term Maine state legislator, served as Executive...
advisory board, as well as an outspoken supporter of the Brights movement
Brights movement
The Brights movement is a social movement that aims to promote public understanding and acknowledgment of the naturalistic worldview, including equal civil rights and acceptance for people who hold a naturalistic worldview. It was co-founded by Paul Geisert and Mynga Futrell in 2003...
.

The Foundations of Reason
More

I think religion for many people is some sort of moral viagra.

Not a single one of the cells that compose you knows who you are, or cares.

Philosophers are never quite sure what they are talking about - about what the issues really are - and so often it takes them rather a long time to recognize that someone with a somewhat different approach (or destination, or starting point) is making a contribution. Little, Brown. ISBN 0-316-18065-3

The juvenile sea squirt wanders through the sea searching for a suitable rock or hunk of coral to cling to and make its home for life. For this task, it has a rudimentary nervous system. When it finds its spot and takes root, it doesn't need its brain anymore, so it eats it! (It's rather like getting tenure.) The analogy between the sea squirt and the associate professor was first pointed out, I think, by the neuroscientist Rodolfo Llinas.

Philosophers' Syndrome: mistaking a failure of the imagination for an insight into necessity.