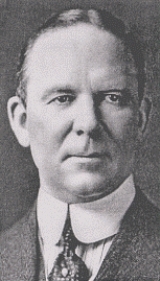 Daniel Jackling was educated in mining and metallurgy disciplines at the Missouri School of Mines in Rolla, Missouri
Rolla, Missouri
Rolla is a city in Phelps County, Missouri, United States, midway between the larger cities of St. Louis and Springfield along I-44. The population in the 2010 United States Census was 19,559.It is the county seat of Phelps County...
, now known as Missouri University of Science and Technology
Missouri University of Science and Technology
Missouri University of Science and Technology is an institution of higher learning located in Rolla, Missouri, United States, and part of the University of Missouri System...
. In 1898, Jackling and Robert C. Gemmell made a detailed examination of the Bingham Canyon copper
Copper
Copper is a chemical element with the symbol Cu and atomic number 29. It is a ductile metal with very high thermal and electrical conductivity. Pure copper is soft and malleable; an exposed surface has a reddish-orange tarnish...
property. They recommended open pit mining, using steam shovel
Steam shovel
A steam shovel is a large steam-powered excavating machine designed for lifting and moving material such as rock and soil. It is the earliest type of power shovel or excavator. They played a major role in public works in the 19th and early 20th century, being key to the construction of railroads...
s to load railroad cars, a novel idea at the time. In 1903, Jackling organized the Utah Copper Company to put his plan into action. The mine proved to be profitable, and open-pit mining of low-grade copper deposits came to dominate the industry by mid-century.

Jackling went on to a very successful and lucrative career as a manager and executive for many copper
Copper
Copper is a chemical element with the symbol Cu and atomic number 29. It is a ductile metal with very high thermal and electrical conductivity. Pure copper is soft and malleable; an exposed surface has a reddish-orange tarnish...
companies, including the Utah Copper Company, in the Western U.S. He was honored with numerous professional awards, including the Washington Award from the Western Society of Engineers for "pioneering in large-scale mining and treatment of low-grade copper ores, releasing vast resources from formerly worthless deposits."

His collected papers were given to the Stanford University Library.

The Daniel C. Jackling Award, established in 1953, is presented annually by the Society for Mining, Metallurgy, and Exploration for "significant contributions to technical progress in mining, geology, and geophysics".

In 1984 Steve Jobs
Steve Jobs
Steven Paul Jobs was an American businessman and inventor widely recognized as a charismatic pioneer of the personal computer revolution. He was co-founder, chairman, and chief executive officer of Apple Inc...
purchased the 17000 sq ft (1,579.4 m²) property and lived in it for ten years. After that, he rented it out for a time, and in 2000, he stopped maintaining it. In 2004 Jobs stirred Woodside preservationist controversy by applying for a permit to tear the historic landmark down to build a smaller house. A judge ruled against demolition in early 2006. Jobs appealed the decision. In April, 2007 the California State Supreme Court refused to hear the Jobs appeal, which meant he could not raze the house. Nonetheless, Jobs won approval to demolish the Jackling House from the Woodside Town Council on May 13, 2009.

On April 29, 2010 the architectural-historical preservationists group Uphold Our Heritage appealed the March court decision to allow the Woodside to issue a demolition permit, submitted by the group's attorney Doug Carstens. The appeal put an "automatic stay" on the issuance of demolition permits. "If that (Yoho family relocation permits) works out, and it looks like there's a lot of promise to that working out, then it won't be necessary to pursue the appeal," he said. "We've always been in favor of relocation and restoration." "We respectfully disagree with the court's decision, and we have all along." Carstens said.

The house was demolished in February, 2011.