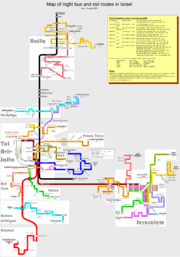 Dan Bus Company is an Israel
Israel
The State of Israel is a parliamentary republic located in the Middle East, along the eastern shore of the Mediterranean Sea...
i bus
Bus
A bus is a road vehicle designed to carry passengers. Buses can have a capacity as high as 300 passengers. The most common type of bus is the single-decker bus, with larger loads carried by double-decker buses and articulated buses, and smaller loads carried by midibuses and minibuses; coaches are...
company based in Tel Aviv
Tel Aviv
Tel Aviv , officially Tel Aviv-Yafo , is the second most populous city in Israel, with a population of 404,400 on a land area of . The city is located on the Israeli Mediterranean coastline in west-central Israel. It is the largest and most populous city in the metropolitan area of Gush Dan, with...
. It operates local bus service in the Tel Aviv Metropolitan Area (Gush Dan) as well as some intercity bus services between the Gush Dan area and nearby regions such as Samaria
Samaria
Samaria, or the Shomron is a term used for a mountainous region roughly corresponding to the northern part of the West Bank.- Etymology :...
, and a connection between Bne Brak and Jerusalem. Dan operates 1,200 buses and has 2,400 employees. It transports over 600,000 passengers daily. In 2009, 23.5% of all Israeli bus travelers used Dan's lines.

The company was founded as a cooperative
Cooperative
A cooperative is a business organization owned and operated by a group of individuals for their mutual benefit...
on December 1, 1945, from the merger of 2 companies, Galei HaMaavir and Ihud Regev. It demutualised
Demutualization
Demutualization is the process by which a customer-owned mutual organization or co-operative changes legal form to a joint stock company. It is sometimes called stocking or privatization. As part of the demutualization process, members of a mutual usually receive a "windfall" payout, in the form...
, becoming a limited company
Limited company
A limited company is a company in which the liability of the members or subscribers of the company is limited to what they have invested or guaranteed to the company. Limited companies may be limited by shares or by guarantee. And the former of these, a limited company limited by shares, may be...
in May 2002.

Dan provides bus service six days a week. From Friday afternoon until after Sunset Saturday night, service is suspended in observance of the Jewish Sabbath
Shabbat
Shabbat is the seventh day of the Jewish week and a day of rest in Judaism. Shabbat is observed from a few minutes before sunset on Friday evening until a few minutes after when one would expect to be able to see three stars in the sky on Saturday night. The exact times, therefore, differ from...
. Dan buses run until approximately 23:30 p.m. and resume service in the early morning hours.