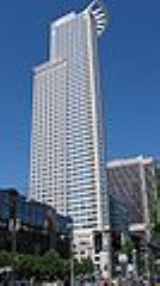 DZ Bank AG is an acronym for Deutsche Zentral-Genossenschaftbank (literally "German Central Co-operative Bank"). DZ Bank is the fourth largest bank in Germany
Germany
Germany , officially the Federal Republic of Germany , is a federal parliamentary republic in Europe. The country consists of 16 states while the capital and largest city is Berlin. Germany covers an area of 357,021 km2 and has a largely temperate seasonal climate...
by asset size and the central institution for more than 900 co-operative banks
Cooperative banking
Cooperative banking is retail and commercial banking organized on a cooperative basis. Cooperative banking institutions take deposits and lend money in most parts of the world....
and their 12,000 branch offices. Within the Volksbanken Raiffeisenbanken Co-operative financial network, which is one of Germany's largest private sector financial service organisations, DZ Bank functions both as a central institution and as a corporate and investment bank.

As a holding, the DZ Bank Group defines itself primarily as a service provider for the local cooperative banks and their 30 million or so clients. The DZ Bank Group includes Bausparkasse Schwäbisch Hall, a building society; DG HYP, a provider of commercial real estate finance; DZ PRIVATBANK Gruppe; R+V Versicherung, an insurance company; TeamBank, a provider of consumer finance; Union Investment
Union Investment
Union Investment is the investment company of the DZ BANK Group and part of the cooperative financial services network....
Group, an asset management company; VR LEASING; and various other specialized institutions.

DZ Bank is based in the financial district of Frankfurt
Frankfurt
Frankfurt am Main , commonly known simply as Frankfurt, is the largest city in the German state of Hesse and the fifth-largest city in Germany, with a 2010 population of 688,249. The urban area had an estimated population of 2,300,000 in 2010...
and maintains branch
Branch
A branch or tree branch is a woody structural member connected to but not part of the central trunk of a tree...
es, subsidiaries and representative offices in key financial centers and economic regions worldwide. The DZ Bank building in Berlin, located at Pariser Platz 3, was designed by architect Frank Gehry
Frank Gehry
Frank Owen Gehry, is a Canadian American Pritzker Prize-winning architect based in Los Angeles, California.His buildings, including his private residence, have become tourist attractions...
.

DZ Bank also has one of the most significant collections of contemporary artistic photography which today comprises over 6,000 works by more than 550 artists.