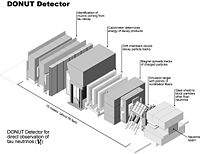 DONUT was an experiment at Fermilab
Fermilab
Fermi National Accelerator Laboratory , located just outside Batavia, Illinois, near Chicago, is a US Department of Energy national laboratory specializing in high-energy particle physics...
dedicated to the search for tau neutrino interactions. Even though the detector operated only during a few months in the summer of 1997, it was largely successful. By detecting the tau neutrino, it confirmed the existence of the last lepton predicted by the Standard Model
Standard Model
The Standard Model of particle physics is a theory concerning the electromagnetic, weak, and strong nuclear interactions, which mediate the dynamics of the known subatomic particles. Developed throughout the mid to late 20th century, the current formulation was finalized in the mid 1970s upon...
. The data from the experiment was also used to put an upper limit on the tau neutrino magnetic moment
Magnetic moment
The magnetic moment of a magnet is a quantity that determines the force that the magnet can exert on electric currents and the torque that a magnetic field will exert on it...
and measure its interaction cross section
Cross section (physics)
A cross section is the effective area which governs the probability of some scattering or absorption event. Together with particle density and path length, it can be used to predict the total scattering probability via the Beer-Lambert law....
.

In DONUT, protons accelerated by the Tevatron
Tevatron
The Tevatron is a circular particle accelerator in the United States, at the Fermi National Accelerator Laboratory , just east of Batavia, Illinois, and is the second highest energy particle collider in the world after the Large Hadron Collider...
were used to produce tau neutrinos via decay of charmed mesons
Charm quark
The charm quark or c quark is the third most massive of all quarks, a type of elementary particle. Charm quarks are found in hadrons, which are subatomic particles made of quarks...
. After eliminating as many unwanted background particles as possible by a system of magnets and bulk matter (mostly iron and concrete), the beam passed through several sheets of nuclear emulsion
Solid state nuclear track detector
A solid-state nuclear track detector or SSNTD is a section of a solid material uncovered to nuclear radiation , etched, and inspected microscopically...
. In very rare cases one of the neutrinos would interact in the detector, producing electrically charged particles which left visible tracks in the emulsion and could be electronically registered by a system of scintillator
Scintillator
A scintillator is a special material, which exhibits scintillation—the property of luminescence when excited by ionizing radiation. Luminescent materials, when struck by an incoming particle, absorb its energy and scintillate, i.e., reemit the absorbed energy in the form of light...
s and drift chambers
Wire chamber
A multi-wire chamber is a detector for particles of ionizing radiation which is an advancement of the concept of the Geiger counter and the proportional counter....
.

Using the electronic information, possible neutrino interactions were identified and selected for further analysis. This meant photographically developing the emulsion sheets so any traces left by particles passing through them would show up as a small black dot. By connecting these dots across subsequent sheets, the path that each particle had taken was reconstructed and likely neutrino interactions identified. The characteristic properties of tau neutrino interactions were that several tracks suddenly appeared without any leading up to them and that one of those tracks would show a "kink" after a few millimeters, indicating decay of a tau lepton
Tau lepton
The tau , also called the tau lepton, tau particle or tauon, is an elementary particle similar to the electron, with negative electric charge and a spin of . Together with the electron, the muon, and the three neutrinos, it is classified as a lepton...
.

In July 2000, the DONUT collaboration announced the first observation of tau neutrino interactions. Even though this result was based on only four events, the signal was far in excess of the expected background (< 0.2 events) and is therefore valid. Its significance lies in the fact that the tau neutrino had so far remained the only particle of the Standard Model
Standard Model
The Standard Model of particle physics is a theory concerning the electromagnetic, weak, and strong nuclear interactions, which mediate the dynamics of the known subatomic particles. Developed throughout the mid to late 20th century, the current formulation was finalized in the mid 1970s upon...
that had not been directly observed except for the Higgs boson
Higgs boson
The Higgs boson is a hypothetical massive elementary particle that is predicted to exist by the Standard Model of particle physics. Its existence is postulated as a means of resolving inconsistencies in the Standard Model...
.

Other than the result itself, DONUT also allowed validation of new techniques for high energy neutrino detection, notably the Emulsion Cloud Chamber, in which nuclear emulsion sheets are interspersed with layers of iron, leading to an increase in the number of interactions.
The source of this article is wikipedia, the free encyclopedia.  The text of this article is licensed under the GFDL.