Encyclopedia
The Maria Skłodowska-Curie Institute of Oncology in Warsaw
Warsaw
Warsaw is the capital and largest city of Poland. It is located on the Vistula River, roughly from the Baltic Sea and from the Carpathian Mountains. Its population in 2010 was estimated at 1,716,855 residents with a greater metropolitan area of 2,631,902 residents, making Warsaw the 10th most...
was founded in 1932 as the Radium Institute by Maria Skłodowska-Curie in collaboration with the Polish
Poland
Poland , officially the Republic of Poland , is a country in Central Europe bordered by Germany to the west; the Czech Republic and Slovakia to the south; Ukraine, Belarus and Lithuania to the east; and the Baltic Sea and Kaliningrad Oblast, a Russian exclave, to the north...
Government, especially President Ignacy Mościcki
Ignacy Moscicki
Ignacy Mościcki was a Polish chemist, politician, and President of Poland . He was the longest-serving President of Poland .-Life:...
. 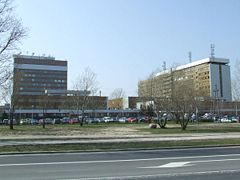 Today it is a specialized health institute of the Polish Ministry of Health. It also has regional branches in Gliwice
Gliwice
Gliwice is a city in Upper Silesia in southern Poland, near Katowice. Gliwice is the west district of the Upper Silesian Metropolitan Union – a metropolis with a population of 2 million...
and Kraków
Kraków
Kraków also Krakow, or Cracow , is the second largest and one of the oldest cities in Poland. Situated on the Vistula River in the Lesser Poland region, the city dates back to the 7th century. Kraków has traditionally been one of the leading centres of Polish academic, cultural, and artistic life...
.

It is the leading and most specialized cancer research and treatment center in Poland.