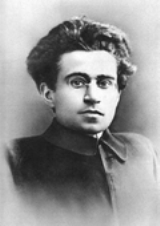 Overview
Cultural hegemony is the philosophic and sociological theory
Theory
The English word theory was derived from a technical term in Ancient Greek philosophy. The word theoria, , meant "a looking at, viewing, beholding", and referring to contemplation or speculation, as opposed to action...
, by the Marxist philosopher
Marxist philosophy
Marxist philosophy or Marxist theory are terms that cover work in philosophy that is strongly influenced by Karl Marx's materialist approach to theory or that is written by Marxists...
Antonio Gramsci
Antonio Gramsci
Antonio Gramsci was an Italian writer, politician, political philosopher, and linguist. He was a founding member and onetime leader of the Communist Party of Italy and was imprisoned by Benito Mussolini's Fascist regime...
, that a culturally diverse society can be dominated
Dominance hierarchy
A dominance hierarchy is the organization of individuals in a group that occurs when competition for resources leads to aggression...
(ruled) by one social class
Social class
Social classes are economic or cultural arrangements of groups in society. Class is an essential object of analysis for sociologists, political scientists, economists, anthropologists and social historians. In the social sciences, social class is often discussed in terms of 'social stratification'...
, by manipulating the societal culture (beliefs
Belief
Belief is the psychological state in which an individual holds a proposition or premise to be true.-Belief, knowledge and epistemology:The terms belief and knowledge are used differently in philosophy....
, explanations
Explanation
An explanation is a set of statements constructed to describe a set of facts which clarifies the causes, context, and consequencesof those facts....
, perceptions
Perception
Perception is the process of attaining awareness or understanding of the environment by organizing and interpreting sensory information. All perception involves signals in the nervous system, which in turn result from physical stimulation of the sense organs...
, values
Value system
A value system is a set of consistent ethic values and measures used for the purpose of ethical or ideological integrity. A well defined value system is a moral code.-Personal and communal:...
) so that its ruling-class
Ruling class
The term ruling class refers to the social class of a given society that decides upon and sets that society's political policy - assuming there is one such particular class in the given society....
worldview  is imposed as the societal norm
Norm (sociology)
Social norms are the accepted behaviors within a society or group. This sociological and social psychological term has been defined as "the rules that a group uses for appropriate and inappropriate values, beliefs, attitudes and behaviors. These rules may be explicit or implicit...
, which then is perceived as a universally valid ideology
Ideology
An ideology is a set of ideas that constitutes one's goals, expectations, and actions. An ideology can be thought of as a comprehensive vision, as a way of looking at things , as in common sense and several philosophical tendencies , or a set of ideas proposed by the dominant class of a society to...
and status quo beneficial to all of society, whilst benefiting only the ruling class.
Etymologic
The philosophic
Philosophy
Philosophy is the study of general and fundamental problems, such as those connected with existence, knowledge, values, reason, mind, and language. Philosophy is distinguished from other ways of addressing such problems by its critical, generally systematic approach and its reliance on rational...
and sociologic
Sociology
Sociology is the study of society. It is a social science—a term with which it is sometimes synonymous—which uses various methods of empirical investigation and critical analysis to develop a body of knowledge about human social activity...
term cultural hegemony derives from the Greek word hegemony
Hegemony
Hegemony is an indirect form of imperial dominance in which the hegemon rules sub-ordinate states by the implied means of power rather than direct military force. In Ancient Greece , hegemony denoted the politico–military dominance of a city-state over other city-states...
(leadership, rule) denoting the indirect imperial
Empire
The term empire derives from the Latin imperium . Politically, an empire is a geographically extensive group of states and peoples united and ruled either by a monarch or an oligarchy....
dominance
Dominance hierarchy
A dominance hierarchy is the organization of individuals in a group that occurs when competition for resources leads to aggression...
with which the hegemon (leader state) rules sub-ordinate states, by the implied means of power, rather than direct military force.