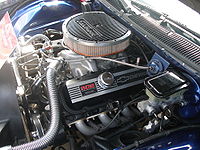 The cubic inch and the cubic foot
Cubic foot
The cubic foot is an Imperial and US customary unit of volume, used in the United States and the United Kingdom. It is defined as the volume of a cube with sides of one foot in length.-Conversions:- Symbols :...
are still used as units of volume in the United States
United States
The United States of America is a federal constitutional republic comprising fifty states and a federal district...
, although the common SI
International System of Units
The International System of Units is the modern form of the metric system and is generally a system of units of measurement devised around seven base units and the convenience of the number ten. The older metric system included several groups of units...
units of volume, the liter
Litér
- External links :*...
, milliliter, and cubic meter, are continually replacing them, especially in manufacturing
Manufacturing
Manufacturing is the use of machines, tools and labor to produce goods for use or sale. The term may refer to a range of human activity, from handicraft to high tech, but is most commonly applied to industrial production, in which raw materials are transformed into finished goods on a large scale...
and high technology.

The following symbols have been used to denote the cubic inch:


Equivalence with other units of volume


1 cubic inch (assuming an international inch
Inch
An inch is the name of a unit of length in a number of different systems, including Imperial units, and United States customary units. There are 36 inches in a yard and 12 inches in a foot...
) is equal to:

The cubic inch was established decades ago as the conventional unit in North America for measuring the volume of electrical boxes. Because of the extensive export of electrical equipment to other countries, some usage of the non-SI unit can be found outside North America.


The cubic inch was formerly used by the automotive industry
Automotive industry
The automotive industry designs, develops, manufactures, markets, and sells motor vehicles, and is one of the world's most important economic sectors by revenue....
and aircraft industry
Aircraft industry
The aircraft industry is the industry supporting aviation by building aircraft and manufacturing aircraft parts for their maintenance. This includes aircraft and parts used for civil aviation and military aviation. Most production is done pursuant to type certificates and Defense Standards issued...
in North America (through the early 1980s) to express the nominal engine displacement
Engine displacement
Engine displacement is the volume swept by all the pistons inside the cylinders of an internal combustion engine in a single movement from top dead centre to bottom dead centre . It is commonly specified in cubic centimeters , litres , or cubic inches...
for the engines of new automobile
Automobile
An automobile, autocar, motor car or car is a wheeled motor vehicle used for transporting passengers, which also carries its own engine or motor...
s, truck
Truck
A truck or lorry is a motor vehicle designed to transport cargo. Trucks vary greatly in size, power, and configuration, with the smallest being mechanically similar to an automobile...
s, aircraft
Aircraft
An aircraft is a vehicle that is able to fly by gaining support from the air, or, in general, the atmosphere of a planet. An aircraft counters the force of gravity by using either static lift or by using the dynamic lift of an airfoil, or in a few cases the downward thrust from jet engines.Although...
, etc. Hence the cubic inch is still used for this purpose in the context of classic car collecting and so forth. The auto industry now uses liters for this purpose (and the use of reciprocating engines for commercial and military airplanes and helicopters has disappeared, having been replaced by turbojet, turboprop
Turboprop
A turboprop engine is a type of turbine engine which drives an aircraft propeller using a reduction gear.The gas turbine is designed specifically for this application, with almost all of its output being used to drive the propeller...
, and gas turbine
Gas turbine
A gas turbine, also called a combustion turbine, is a type of internal combustion engine. It has an upstream rotating compressor coupled to a downstream turbine, and a combustion chamber in-between....
engines).

For more information and a list of cubic-inch-to-liter displacement conversions, see engine displacement.