Cuban bread is a fairly simple white bread
White bread
White bread is made from wheat flour from which the bran and the germ have been removed through a process known as milling. Milling gives white flour a longer shelf life by removing the bran which contains oil, allowing products made with it, like white bread, the ability to survive storage and...
, similar to French bread and Italian bread, but has a slightly different baking method and ingredient list (in particular, it generally includes a small amount of fat in the form of lard
Lard
Lard is pig fat in both its rendered and unrendered forms. Lard was commonly used in many cuisines as a cooking fat or shortening, or as a spread similar to butter. Its use in contemporary cuisine has diminished because of health concerns posed by its saturated-fat content and its often negative...
or vegetable shortening); it is usually made in long, baguette
Baguette
A baguette is "a long thin loaf of French bread" that is commonly made from basic lean dough...
-like loaves. It is a staple of Cuban-American cuisine and is traditionally the bread of choice when making an authentic Cuban sandwich
Cuban sandwich
A Cuban sandwich is a variation of a ham and cheese originally created in cafes catering to Cuban workers in Cuba and in the early Cuban immigrant communities of Florida: Key West and Ybor City, Tampa. Later on, Cuban exiles and expatriates brought it to Miami where it is also still very popular...
. 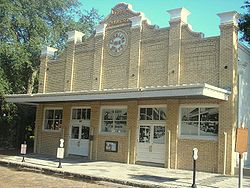 There is some debate about the true source of "real" Cuban bread, with both Miami and Tampa
Tâmpa
Tâmpa may refer to several villages in Romania:* Tâmpa, a village in Băcia Commune, Hunedoara County* Tâmpa, a village in Miercurea Nirajului, Mureş County* Tâmpa, a mountain in Braşov city...
, Florida
Florida
Florida is a state in the southeastern United States, located on the nation's Atlantic and Gulf coasts. It is bordered to the west by the Gulf of Mexico, to the north by Alabama and Georgia and to the east by the Atlantic Ocean. With a population of 18,801,310 as measured by the 2010 census, it...
claiming to be the home of the best. With regards to where it originated, the earliest U.S. bakery to produce Cuban bread was most likely La Joven Francesca Bakery, which was established in 1896 by the Sicilian-born Francisco Ferlita in Ybor City
History of Ybor City
Ybor City is a historic neighborhood in Tampa, Florida, located just northeast of downtown. It was founded as an independent town in 1885 by a group of cigar manufacturers led by Vicente Martinez-Ybor and was annexed by Tampa in 1887...
, a Cuban-Spanish-Italian immigrant community in Tampa. This bakery sold bread for 3 to 5 cents a loaf, mainly to the Ybor City market.

The bakery was destroyed by fire in 1922, leaving only the brick bread oven standing. Francisco rebuilt the bakery even larger than before, adding a second oven, and it became a major supplier of bread for the Tampa/Ybor area. The bakery also became a place to congregate, drink a good cup of Cuban coffee
Cuban espresso
Café Cubano is a type of espresso which originated in Cuba after espresso machines were first imported there from Italy...
, and catch up on the local news.

In Ybor City, bread used to be delivered every morning like milk. Houses had a sturdy nail driven into the doorframe next to the door. The bread deliveryman would impale the fresh loaf of bread on the nail.

La Joven closed in 1973, but soon found new life when it was renovated and converted into the Ybor City State Museum
Ybor City, Tampa, Florida
Ybor City is a historic neighborhood in Tampa, Florida located just northeast of downtown. It was founded in the 1880s by cigar manufacturers and was populated by thousands of immigrants, mainly from Spain, Cuba, and Italy...
, becoming the main part of the museum complex. The original ovens where the original Cuban bread was baked are still viewable inside.

La Segunda Bakery ('The Second' as La Primera, 'The First,' burned down long ago) is currently the major producer of Cuban Bread for the Tampa area. It was founded by Juan Morè, who migrated to Tampa, FL, and opened La Primera Bakery in 1915.

It is not amiss to say that the Latins in Ybor City make a very fine bread, equal in all respects to the French article of that kind and unexcelled by the Vienna product.

A traditional loaf of Cuban bread is approximately three feet long and somewhat rectangular crossways (as compared to the rounder shape of Italian or French bread loaves). It has a hard, thin, almost papery toasted crust and a soft flaky middle. In the early days, the dough was stretched thin to make it last, creating the bread's distinctive air pockets and long shape. As they have for decades, La Segunda and other traditional Cuban bread makers lay a long, moist palm
Arecaceae
Arecaceae or Palmae , are a family of flowering plants, the only family in the monocot order Arecales. There are roughly 202 currently known genera with around 2600 species, most of which are restricted to tropical, subtropical, and warm temperate climates...
frond
Frond
The term frond refers to a large, divided leaf. In both common usage and botanical nomenclature, the leaves of ferns are referred to as fronds and some botanists restrict the term to this group...
on top of the loaves before baking, creating a shallow trench in the upper crust, producing an effect similar to the slashing of a European-style loaf. (The frond is removed before eating.)

Cuban bread is the necessary base for a 'Cuban sandwich
Cuban sandwich
A Cuban sandwich is a variation of a ham and cheese originally created in cafes catering to Cuban workers in Cuba and in the early Cuban immigrant communities of Florida: Key West and Ybor City, Tampa. Later on, Cuban exiles and expatriates brought it to Miami where it is also still very popular...
' (sometimes called a "sandwich mixto"). It can also be served as a simple breakfast, especially toasted and pressed with butter and served alongside (and perhaps dunked into) a hot mug of cafe con leche
Café con leche
Café con leche is a Spanish coffee beverage. More similar to the Italian caffe latte than to the French café au lait, café con leche is a coffee beverage consisting of strong or bold coffee mixed with scalded milk in approximately a 1:1 ratio...
(strong dark-roasted Cuban coffee with scalded milk).

Cuban bread should be eaten soon after baking, as it tends to go stale
Staling
Staling, or "going stale", is a chemical and physical process in bread and other foods that reduces their palatability. Stale bread is dry and leathery.-Mechanism and effects:...
quickly. (In Ybor City, it was said that after 24 hours, Cuban bread is only good for breading a deviled crab
Deviled crab
thumb|200px|right| Advertising "devil" crabs along 7th Avenue in [[Ybor City, Tampa, Florida]] A deviled crab is a simple croquette made from seasoned and cooked crab meat which is breaded, rolled into the approximate shape of a rugby football or a small potato, and fried...
.) It can also be frozen.

Stale Cuban bread is the preferred "weapon of choice" in protests performed by the Conch Republic
Conch Republic
The Conch Republic is a micronation declared as a tongue-in-cheek secession of the city of Key West from the United States on April 23, 1982. It has been maintained as a tourism booster for the city since...
.