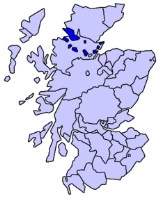 Encyclopedia
Cromartyshire was a county
Counties of Scotland
The counties of Scotland were the principal local government divisions of Scotland until 1975. Scotland's current lieutenancy areas and registration counties are largely based on them. They are often referred to as historic counties....
in the Highlands of Scotland
Scotland
Scotland is a country that is part of the United Kingdom. Occupying the northern third of the island of Great Britain, it shares a border with England to the south and is bounded by the North Sea to the east, the Atlantic Ocean to the north and west, and the North Channel and Irish Sea to the...
, consisting of a main portion between Sutherland
Sutherland
Sutherland is a registration county, lieutenancy area and historic administrative county of Scotland. It is now within the Highland local government area. In Gaelic the area is referred to according to its traditional areas: Dùthaich 'IcAoidh , Asainte , and Cataibh...
and Ross-shire
Ross-shire
Ross-shire is an area in the Highland Council Area in Scotland. The name is now used as a geographic or cultural term, equivalent to Ross. Until 1889 the term denoted a county of Scotland, also known as the County of Ross...
and a series of exclaves within Ross-shire. Ross-shire and Cromartyshire were combined as the single county of Ross and Cromarty
Ross and Cromarty
Ross and Cromarty is a variously defined area in the Highlands and Islands of Scotland. There is a registration county and a lieutenancy area in current use...
by the Local Government (Scotland) Act 1889
Local Government (Scotland) Act 1889
The Local Government Act 1889 is an Act of the Parliament of the United Kingdom which was passed on 26 August 1889. The main effect of the Act was to establish elected county councils in Scotland...
, and this became part of the Highland
Highland (council area)
Highland is a council area in the Scottish Highlands and is the largest local government area in both Scotland and the United Kingdom as a whole. It shares borders with the council areas of Moray, Aberdeenshire, Perth and Kinross, and Argyll and Bute. Their councils, and those of Angus and...
region
Regions and districts of Scotland
The local government areas of Scotland were redefined by the Local Government Act 1973 and redefined again by the Local Government etc Act 1994....
in 1975. The only burgh
Burgh
A burgh was an autonomous corporate entity in Scotland and Northern England, usually a town. This type of administrative division existed from the 12th century, when King David I created the first royal burghs. Burgh status was broadly analogous to borough status, found in the rest of the United...
of Cromartyshire was the county town
County town
A county town is a county's administrative centre in the United Kingdom or Ireland. County towns are usually the location of administrative or judicial functions, or established over time as the de facto main town of a county. The concept of a county town eventually became detached from its...
, Cromarty
Cromarty
The Royal Burgh of Cromarty is a burgh in Ross and Cromarty, Highland, Scotland.-History:It was previously the county town of the former county of Cromartyshire...
.

The nucleus of the county consisted of the lands of Cromarty
Cromarty
The Royal Burgh of Cromarty is a burgh in Ross and Cromarty, Highland, Scotland.-History:It was previously the county town of the former county of Cromartyshire...
in the north of the peninsula
Peninsula
A peninsula is a piece of land that is bordered by water on three sides but connected to mainland. In many Germanic and Celtic languages and also in Baltic, Slavic and Hungarian, peninsulas are called "half-islands"....
of the Black Isle
Black Isle
The Black Isle is an eastern area of the Highland local government council area of Scotland, within the county of Ross and Cromarty. The name nearly always includes the article "the"....
. To this were joined from time to time various estates scattered throughout Ross-shire
Ross-shire
Ross-shire is an area in the Highland Council Area in Scotland. The name is now used as a geographic or cultural term, equivalent to Ross. Until 1889 the term denoted a county of Scotland, also known as the County of Ross...
, most notably the districts around Ullapool
Ullapool
Ullapool is a small town of around 1,300 inhabitants in Ross and Cromarty, Highland, Scotland. Despite its small size, it is the largest settlement for many miles around, and is a major tourist destination of Scotland. The North Atlantic Drift passes by Ullapool, bringing moderate temperatures...
and Little Loch Broom on the coast of the Minch, the area in which Ben Wyvis
Ben Wyvis
Ben Wyvis is a mountain located in Easter Ross, Ross and Cromarty, Highland, in northern Scotland, north-west of Dingwall. It forms an undulating ridge running roughly north-south for about 5 km, the highest summit of which is Glas Leathad Mòr...
is situated, and a tract to the north of Loch Fannich
Loch Fannich
Loch Fannich is a remote loch in Ross-shire, in the Scottish highlands. The loch is located 12 miles west of Strathpeffer.Loch Fannich was dammed and its water level raised as part of the Conon Hydro-Electric Power Scheme, built by the North of Scotland Hydro-Electric Board between 1946 and 1961...
- which was acquired by the ancestors of Sir George Mackenzie
George Mackenzie, 1st Earl of Cromartie
George Mackenzie, 1st Earl of Cromartie FRS , known as Sir George Mackenzie, 2nd Baronet from 1654 to 1685 and as The Viscount of Tarbat from 1685 to 1703, was a Scottish statesman....
(1630 - 1714), afterwards Viscount Tarbat (1685) and 1st Earl of Cromartie
Earl of Cromartie
Earl of Cromartie is a title that has been created twice, both times for members of the Mackenzie family. This branch of the family descends from Sir Roderick Mackenzie, whose elder brother Kenneth Mackenzie was created Lord Mackenzie of Kintail in 1609 and was the father of Colin Mackenzie, 1st...
(1703).
Wishing to combine these sporadic properties into one shire, Viscount Tarbat contrived to procure their annexation to his sheriffdom
Sheriffdom
A sheriffdom is a judicial district in Scotland.Since 1 January 1975 there have been six sheriffdoms. Previously sheriffdoms were composed of groupings of counties...
of Cromarty in 1685 and 1698, and the area of the enlarged county then amounted to nearly 370 square miles (958 km²).