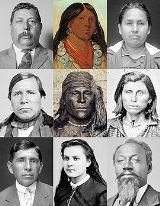 Overview
The Muscogee also known as the Creek or Creeks, are a Native American
Native Americans in the United States
Native Americans in the United States are the indigenous peoples in North America within the boundaries of the present-day continental United States, parts of Alaska, and the island state of Hawaii. They are composed of numerous, distinct tribes, states, and ethnic groups, many of which survive as...
people traditionally from the southeastern United States
Southern United States
The Southern United States—commonly referred to as the American South, Dixie, or simply the South—constitutes a large distinctive area in the southeastern and south-central United States...
. Mvskoke is their name in traditional spelling. The modern Muscogee live primarily in Oklahoma
Oklahoma
Oklahoma is a state located in the South Central region of the United States of America. With an estimated 3,751,351 residents as of the 2010 census and a land area of 68,667 square miles , Oklahoma is the 28th most populous and 20th-largest state...
, Alabama
Alabama
Alabama is a state located in the southeastern region of the United States. It is bordered by Tennessee to the north, Georgia to the east, Florida and the Gulf of Mexico to the south, and Mississippi to the west. Alabama ranks 30th in total land area and ranks second in the size of its inland...
, Georgia
Georgia (U.S. state)
Georgia is a state located in the southeastern United States. It was established in 1732, the last of the original Thirteen Colonies. The state is named after King George II of Great Britain. Georgia was the fourth state to ratify the United States Constitution, on January 2, 1788...
, and Florida
Florida
Florida is a state in the southeastern United States, located on the nation's Atlantic and Gulf coasts. It is bordered to the west by the Gulf of Mexico, to the north by Alabama and Georgia and to the east by the Atlantic Ocean. With a population of 18,801,310 as measured by the 2010 census, it...
. Their language, Mvskoke
Creek language
The Creek language, also known as Muskogee or Muscogee , is a Muskogean language spoken by Muscogee and Seminole people primarily in the U.S. states of Oklahoma and Florida....
, is a member of the Muscogee branch of the Muscogean language family
Muskogean languages
Muskogean is an indigenous language family of the Southeastern United States. Though there is an ongoing debate concerning their interrelationships, the Muskogean languages are generally divided into two branches, Eastern Muskogean and Western Muskogean...
.

How did they learn to farm corn?

Who was the 1930 muscogee creek nation chief.
More
x