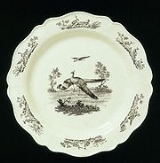 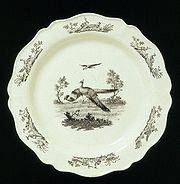 Creamware is a cream-coloured, refined earthenware
Earthenware
Earthenware is a common ceramic material, which is used extensively for pottery tableware and decorative objects.-Types of earthenware:Although body formulations vary between countries and even between individual makers, a generic composition is 25% ball clay, 28% kaolin, 32% quartz, and 15%...
created about 1750 by the potters of Staffordshire
Staffordshire
Staffordshire is a landlocked county in the West Midlands region of England. For Eurostat purposes, the county is a NUTS 3 region and is one of four counties or unitary districts that comprise the "Shropshire and Staffordshire" NUTS 2 region. Part of the National Forest lies within its borders...
, England
England
England is a country that is part of the United Kingdom. It shares land borders with Scotland to the north and Wales to the west; the Irish Sea is to the north west, the Celtic Sea to the south west, with the North Sea to the east and the English Channel to the south separating it from continental...
, which proved ideal for domestic ware. It was popular until the 1840s. It was also known as tortoiseshellware or Prattware depending on the colour of glaze
Ceramic glaze
Glaze is a layer or coating of a vitreous substance which has been fired to fuse to a ceramic object to color, decorate, strengthen or waterproof it.-Use:...
used. It served as an inexpensive substitute for Chinese export porcelain.

The most notable producer of creamware was Josiah Wedgwood
Josiah Wedgwood
Josiah Wedgwood was an English potter, founder of the Wedgwood company, credited with the industrialization of the manufacture of pottery. A prominent abolitionist, Wedgwood is remembered for his "Am I Not A Man And A Brother?" anti-slavery medallion. He was a member of the Darwin–Wedgwood family...
. Around 1779, he was able to lighten the cream colour to a bluish white using cobalt in the lead overglaze. Wedgwood sold this more desirable product under the name pearl ware. Widely imitated, pearlware is used currently to distinguish pieces with this bluish-tinged or "China" glaze. Wedgwood supplied his creamware to Queen Charlotte and Catherine the Great and used the trade name Queen's ware.