Courts of the Republic of Ireland
Topic Home
Discussion
0

Encyclopedia
The Courts of the Republic of Ireland
Republic of Ireland
Ireland , described as the Republic of Ireland , is a sovereign state in Europe occupying approximately five-sixths of the island of the same name. Its capital is Dublin. Ireland, which had a population of 4.58 million in 2011, is a constitutional republic governed as a parliamentary democracy,...
consist of the Supreme Court, the Court of Criminal Appeal
Court of Criminal Appeal (Ireland)
The Court of Criminal Appeal of Ireland hears appeals of indictable offences tried in the Circuit Court, the Central Criminal Court and the Special Criminal Court....
, the High Court, the Circuit Court
Circuit Court (Ireland)
The Circuit Court is an intermediate level court of local and limited jurisdiction in the Republic of Ireland which hears both civil and criminal matters. On the criminal side the Circuit Court hears criminal matters tried on indictment with a judge and jury, except for certain serious crimes...
and the District Court
District Court (Ireland)
The District Court is the main court of summary jurisdiction in Ireland. It has responsibility for hearing minor criminal matters, small civil claims, liquor licensing, and certain family law applications...
. The courts apply the laws of Ireland
Law of the Republic of Ireland
The law of the Republic of Ireland consists of constitutional, statute and common law. The highest law in the Republic is the Constitution of Ireland, from which all other law derives its authority...
. Ireland is a common law
Common law
Common law is law developed by judges through decisions of courts and similar tribunals rather than through legislative statutes or executive branch action...
jurisdiction and trials for serious offences must usually be held before a jury
Jury
A jury is a sworn body of people convened to render an impartial verdict officially submitted to them by a court, or to set a penalty or judgment. Modern juries tend to be found in courts to ascertain the guilt, or lack thereof, in a crime. In Anglophone jurisdictions, the verdict may be guilty,...
. The High Court and the Supreme Court have authority, by means of judicial review
Judicial review
Judicial review is the doctrine under which legislative and executive actions are subject to review by the judiciary. Specific courts with judicial review power must annul the acts of the state when it finds them incompatible with a higher authority...
, to determine the compatibility of laws and activities of other institutions of the state with the constitution
Constitution of Ireland
The Constitution of Ireland is the fundamental law of the Irish state. The constitution falls broadly within the liberal democratic tradition. It establishes an independent state based on a system of representative democracy and guarantees certain fundamental rights, along with a popularly elected...
and the law. Except in exceptional circumstances, court hearings must occur in public. 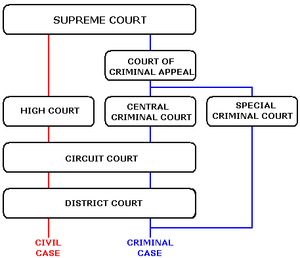 The Supreme Court and the High Court are established by the Constitution. The Supreme Court is defined as the Court of Final Appeal, but usually hears appeals only on points of law. Its decisions as to the interpretation of the Constitution and the law are final. The High Court also has authority to interpret the Constitution. It also tries the most serious criminal and civil cases, and hears certain appeals from lower courts. When sitting as a criminal court it is called the Central Criminal Court and there is a jury.

The Constitution provides for only two institutions in which a serious crime may be tried in the absence of a jury: a military tribunal
Military tribunal
A military tribunal is a kind of military court designed to try members of enemy forces during wartime, operating outside the scope of conventional criminal and civil proceedings. The judges are military officers and fulfill the role of jurors...
, and a special court established by law to try serious offences whenever this is considered to be in the interests of justice or public order. Such a court has been established in the form of the Special Criminal Court
Special Criminal Court
The Special Criminal Court is a juryless criminal court in the Republic of Ireland which tries terrorist and organized crime cases. Article 38 of the Constitution of Ireland empowers the Dáil to establish "special courts" with wide-ranging powers when "the ordinary courts are inadequate to secure...
, which has been used to try those accused of being members of paramilitary organisations such as the Provisional IRA, or of leading organised crime.

The Constitution mandates that the remuneration of judges may not be diminished while they remain in office. The Twenty-Ninth Amendment of the Constitution Bill 2011 is intended to ease this restriction. The refusal of most judges to pay the public service pension levy in 2009 was said by some observers to demonstrate how out of touch with reality the judiciary had become.

The procedure for removing a judge of the Supreme Court or the High Court from office is specified in the Constitution, but by law the same mechanism applies to judges of the lower courts. A judge may be removed from office only for "stated misbehaviour or incapacity" and only if a joint resolution is adopted by both houses of the Oireachtas (Parliament). After such a resolution is approved the judge is dismissed by the President. No judge has been removed from office since the foundation of the state in 1922.

In 1999 then Chief Justice Hamilton reported on the interventions of two judges, Justice Hugh O'Flaherty of the Supreme Court and Justice Cyril Kelly of the High Court, in the early release of Philip Sheedy
Philip Sheedy Affair
The Philip Sheedy affair was an Irish political and judicial controversy which resulted in the resignation of both a Supreme Court and High Court judge.- Background :...
, who had been convicted of causing death by dangerous driving. The Chief Justice described their actions as inappropriate and unwise. Following strong political reaction, and facing an Oireachtas debate on the report and a request by the executive to resign, the judges both resigned. In their resignation statements they said they had done nothing wrong, but were resigning "to restore faith in the judicial system".

In 2004 a motion to impeach a Circuit Court judge, Brian Curtin
Brian Curtin
Brian Curtin is a former barrister and Irish circuit court judge, who was tried for possessing images of child pornography. After the case collapsed, the question of whether Curtin could continue as a judge became the focus of political and legal dispute. An impeachment motion was launched in the...
, was launched in the Dáil
Dáil Éireann
Dáil Éireann is the lower house, but principal chamber, of the Oireachtas , which also includes the President of Ireland and Seanad Éireann . It is directly elected at least once in every five years under the system of proportional representation by means of the single transferable vote...
, the first time such a move has been made. This followed strong public reaction to his acquittal on charges of possession of child pornography
Child pornography
Child pornography refers to images or films and, in some cases, writings depicting sexually explicit activities involving a child...
, due to evidence seized by gardaí being ruled inadmissible, and the judge's refusal of a Government request to resign. The Dáil established a joint committee to consider the evidence and report to the Dáil, a process that was upheld by the Supreme Court following a challenge by the judge. In November 2006, facing questioning by the committee, Judge Curtin resigned on health grounds, ending the impeachment process.