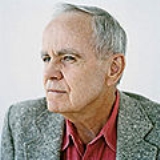 What discordant vespers do the tinker's goods chime through the long twilight and over the brindled forest road, him stooped and hounded through the windy recrements of the day like those old exiles who divorced of corporeality and enjoined ingress of heaven or hell wander forever the middle warrens spoorless increate and anathema.

And as he lay there a far crack of lightning went bluely down the sky and bequeathed him in an embryonic bird's first fissured vision of the world and transpiring instant and outrageous from dark to dark a final view of the grotto and the shapeless white plasm struggling upon the rich and incunabular moss like a lank swamp hare.

And she waited again at the front door with it open, poised between the maw of the dead and loveless house and the outer dark like a frail thief.

Now the entire herd had begun to wheel wider and faster along the bluff and the outermost ranks swung centrifugally over the escarpment row on row wailing and squealing and above this the howls and curses of the drovers that now upreared in the moil of flesh they tended and swept with dust had begun to assume satanic looks with their staves and wild eyes as if they were no true swineheards but disciples of darkness got among these charges to herd them to their doom.

Don't flang him off the bluff, boys. Tain't christian.

In the long arcade of the bus station footfalls come back like laughter. He marches darkly toward his darkly marching shape in the glass of the depot door. His fetch come up from life's other side like an autoscopic hallucination, Suttree and Antisuttree, hand reaching to the hand.

How surely are the dead beyond death. Death is what the living carry with them. A state of dread, like some uncanny foretaste of a bitter memory. But the dead do not remember and nothingness is not a curse. Far from it.

Put away these frozenjawed primates and their annals of ways beset and ultimate dark. What deity in the realms of dementia, what rabid god decocted out of the smoking lobes of hydrophobia could have devised a keeping place for souls so poor as in this flesh. This mawky wormbent tabernacle.

He reached down and tapped Suttree's knee with his forefinger. You, my good buddy, are a fourteen carat gold plated son of a bitch. That's what your problem is. And that being your problem, there's not a whole lot of people in sympathy with you. Or with your problem.