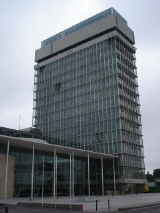 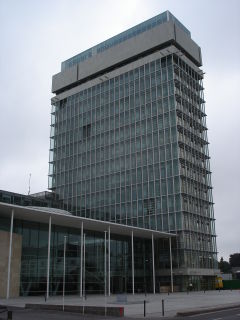 The County Hall is a 17-storey office block, owned by Cork County Council
Cork County Council
Cork County Council is the local authority which is responsible for County Cork in Ireland. The Council is responsible for Housing and Community, Roads and Transportation, Urban planning and Development, Amenity and Culture, and Environment. The head of the council has the title of Cathaoirleach...
and housing its administrative headquarters. The building is located on Carrigrohane Road in the City of Cork
Cork (city)
Cork is the second largest city in the Republic of Ireland and the island of Ireland's third most populous city. It is the principal city and administrative centre of County Cork and the largest city in the province of Munster. Cork has a population of 119,418, while the addition of the suburban...
(which is actually a separate administrative area from the County). At 67m (219 ft), the building was the tallest storeyed building in the Republic of Ireland until surpassed by The Elysian
The Elysian
The Elysian is a mixed-use celtic tiger-era building at Eglinton Street in Cork City, Ireland. Construction of the building was completed in early September 2008....
in 2008.

The building was designed by Patrick McSweeney, then Cork County Architect and opened in 1968 and is now a protected building, although its modern design
Modern architecture
Modern architecture is generally characterized by simplification of form and creation of ornament from the structure and theme of the building. It is a term applied to an overarching movement, with its exact definition and scope varying widely...
was not universally admired. Oisín Kelly
Oisín Kelly
Oisín Kelly was an Irish sculptor.Kelly was born as Austin Kelly in Dublin, the son of William Kelly, principal of James's Street National School, and his wife Elizabeth . Until he became an artist in residence at the Kilkenny Design Centre in 1966, he worked as a school teacher...
's statue Two Working Men
Two Working Men
Two Working Men are a pair of statues made by the Irish sculptor Oisín Kelly. The piece took Kelly three years to create and was unveiled in front of the County Hall in Cork in 1969...
stands outside the complex.
A redevelopment project began in 2002, which was opposed by An Taisce
An Taisce
An Taisce , also known as the National Trust for Ireland, was established in 1948 with a similar mission to that of the National Trust in England, Wales and Northern Ireland...
. The original distinctive concrete
Concrete
Concrete is a composite construction material, composed of cement and other cementitious materials such as fly ash and slag cement, aggregate , water and chemical admixtures.The word concrete comes from the Latin word...
facade had been severely eroded, and it was decided to replace rather than repair this, as part of an expansion scheme. A louvered glass cladding replaced the original concrete, and a six-storey extension at ground level was completed in June 2006. The building was previously measured at 64m, but the addition of an extra storey extended its height to 67m. This new top storey is a glazed pavilion, containing a restaurant offering panoramic views of the city and environs.