Encyclopedia
The Constitutionalist Liberal Party is an opposition political party
Political party
A political party is a political organization that typically seeks to influence government policy, usually by nominating their own candidates and trying to seat them in political office. Parties participate in electoral campaigns, educational outreach or protest actions...
in Nicaragua
Nicaragua
Nicaragua is the largest country in the Central American American isthmus, bordered by Honduras to the north and Costa Rica to the south. The country is situated between 11 and 14 degrees north of the Equator in the Northern Hemisphere, which places it entirely within the tropics. The Pacific Ocean...
. At the legislative elections
Elections in Nicaragua
Elections in Nicaragua gives information on elections and election results in Nicaragua.The Republic of Nicaragua elects on national level a head of state – the president – and a legislature. The President of Nicaragua and his or her vice-president are elected on one ballot for a...
, held on 5 November 2006, the party won 25 of 92 seats in the National Assembly.

The Constitutionalist Liberal Party is the political successor of the Liberal Party, a faction which has existed since Nicaragua became independent during the 1830s. After being defeated by the conservatives in a civil war in the 1850s (with the help of American troops), the Liberal Party returned to power in 1893 under President José Santos Zelaya
José Santos Zelaya
José Santos Zelaya López was the President of Nicaragua from 25 July 1893 to 21 December 1909.-Early life:He was a son of José María Zelaya Irigoyen, born in Nicaragua, and mistress Juana López Ramírez...
, who lost power in 1909. Under pressure from American troops who had occupied Nicaragua, the liberals lost power the following year, and remained out of power until 1926 when, following another revolt, they forced the conservatives into a coalition government. Some factions of the Liberal Party, along with some factions of the Conservative Party, supported Anastasio Somoza Garcia
Anastasio Somoza García
Anastasio Somoza García was officially the President of Nicaragua from 1 January 1937 to 1 May 1947 and from 21 May 1950 to 29 September 1956, but ruled effectively as dictator from 1936 until his assassination.-Biography:Somoza was born in San Marcos, Carazo Department in Nicaragua, the son of...
, who gained power in the 1930s, defeating another liberal faction led by Augusto Sandino, who continued fighting after the 1926 coalition agreement. The liberals and conservatives were both marginalized by the Somoza family, who formed the Nationalist Liberal Party
Nationalist Liberal Party
The Nationalist Liberal Party is a centre-right political party in Nicaragua. It was established by Anastasio Somoza García in the 1930s. When it was formed, it drew its members mainly from factions within the Conservative Party and the Liberal Party....
, and continued to be out of power when the Somozas were overthrown by the Sandinista National Liberation Front
Sandinista National Liberation Front
The Sandinista National Liberation Front is a socialist political party in Nicaragua. Its members are called Sandinistas in both English and Spanish...
in 1979. 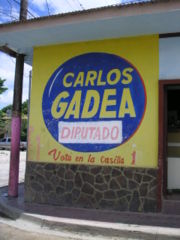 The liberal party had by this time split into many groups, many of which supported the United Nicaraguan Opposition
United Nicaraguan Opposition
The United Nicaraguan Opposition was a Nicaraguan rebel umbrella group formed in 1985, led by the triumvirate of Adolfo Calero, Alfonso Robelo, and Arturo Cruz...
which successfully opposed the Sandinistas in the 1990 elections. By the late 1990s, led by Arnoldo Alemán
Arnoldo Alemán
José Arnoldo Alemán Lacayo was the 81st President of Nicaragua from 10 January 1997 to 10 January 2002.-Biography:Alemán was born in Managua and received his early education at the La Salle institute in Managua...
, most of the liberal groups consolidated to form the Constitutionalist Liberal Party, which was at first known as the Liberal Alliance. In 1996 Alemán won the presidential election and served as president until 2002, while the party won 42 of the 93 seats in the 1996 congressional elections, more than any other party. At the November 2001 elections, the party gained a majority in Congress, winning 47 of 92 seats. The same day, its candidate Enrique Bolaños
Enrique Bolaños
Enrique José Bolaños Geyer was the President of Nicaragua from 10 January 2002 to 10 January 2007. President Bolaños is of Spanish and German heritage and was born in Masaya ....
won the presidential elections.
Though still a strong force in Nicaragua, there have been many disputes within it since 2001 which, by 2006, had caused it to lose its majority in Congress and the presidency. Bolaños broke with the PLC to form the Alliance for the Republic
Alliance for the Republic
The Alliance for the Republic is a right-wing liberal-conservative Nicaraguan political party founded in 2004 by dissident liberals from the Constitutional Liberal Party and the Conservative Party including Enrique Bolaños, who was President of Nicaragua at the time.APRE won 3 major offices in...
. José Rizo was nominated as the Presidential candidate and José Antonio Alvarado was nominated as the vice-Presidential candidate for the November 2006 elections
Nicaraguan general election, 2006
Nicaragua held a general election on 5 November 2006. The country's voters went to the polls to elect a new President of the Republic and 90 members of the National Assembly, all of whom will serve five-year terms...
. Eduardo Montealegre
Eduardo Montealegre
Eduardo Montealegre is a Nicaraguan politician. He ran for president in the 2006 general election as the candidate of the Nicaraguan Liberal Alliance a spin-off of the Constitutional Liberal Party in alliance with other liberal parties and the Conservative Party...
, another presidential candidate for the elections, was a former member of the Constitutionalist Liberal Party and formed the Nicaraguan Liberal Alliance
Nicaraguan Liberal Alliance
The Nicaraguan Liberal Alliance is a political party in Nicaragua. It was started in 2005 by Eduardo Montealegre and other members of the Constitutional Liberal Party who opposed former President of the country Arnoldo Alemán's continued control of the PLC even after he had been found guilty of...
which includes other former PLC members. Montealegre and Rizo were both defeated, as Sandinista Daniel Ortega finished far enough ahead of both of them to avoid a runoff. Rizo came in third place with 26% of the vote. The party came in second place in the congressional elections.