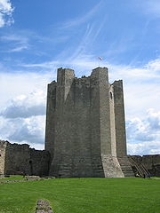 Encyclopedia
Conisbrough Castle is a 12th-century castle
Castle
A castle is a type of fortified structure built in Europe and the Middle East during the Middle Ages by European nobility. Scholars debate the scope of the word castle, but usually consider it to be the private fortified residence of a lord or noble...
in Conisbrough
Conisbrough
Conisbrough is a town within the Metropolitan Borough of Doncaster, in South Yorkshire, England. It is located roughly midway between Doncaster and Rotherham, and is built alongside the River Don at...
, South Yorkshire
South Yorkshire
South Yorkshire is a metropolitan county in the Yorkshire and the Humber region of England. It has a population of 1.29 million. It consists of four metropolitan boroughs: Barnsley, Doncaster, Rotherham, and City of Sheffield...
, England, whose remains are dominated by the 97-foot (29.5m) high circular keep, which is supported by six buttress
Buttress
A buttress is an architectural structure built against or projecting from a wall which serves to support or reinforce the wall...
es. In the mid-1990s, the keep was restored, with a wood
Wood
Wood is a hard, fibrous tissue found in many trees. It has been used for hundreds of thousands of years for both fuel and as a construction material. It is an organic material, a natural composite of cellulose fibers embedded in a matrix of lignin which resists compression...
en roof and two floors being rebuilt. Audio and visual displays now help to reconstruct a view of life in a medieval castle, while a history of the site is documented in the adjacent visitors' centre. The building is considered one of South Yorkshire's primary tourist attractions, and sees in excess of 30,000 visitors per year. It is managed by English Heritage, as of 1 April 2008. Doncaster Council own the land the monument is standing on, but English Heritage
English Heritage
English Heritage . is an executive non-departmental public body of the British Government sponsored by the Department for Culture, Media and Sport...
manages the property. 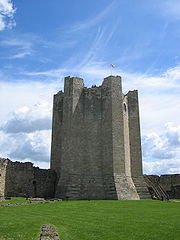 The castle was probably built by Hamelin Plantagenet on the site of an earlier Norman
Norman dynasty
Norman dynasty is the usual designation for the family that were the Dukes of Normandy and the English monarchs which immediately followed the Norman conquest and lasted until the Plantagenet dynasty came to power in 1154. It included Rollo and his descendants, and from William the Conqueror and...
castle. The Warenne family
House of Warren
The House of Warren is an Anglo-Norman comital house that held extensive lands in France, England, Wales, and Ireland...
also owned Sandal Castle
Sandal Castle
Sandal Castle is a ruined medieval castle in Sandal Magna, a suburb of the city of Wakefield in West Yorkshire, overlooking the River Calder. It was the site of royal intrigue, the opening of one of William Shakespeare's plays, and was the source for a common children's nursery rhyme.-The...
near Wakefield
Wakefield
Wakefield is the main settlement and administrative centre of the City of Wakefield, a metropolitan district of West Yorkshire, England. Located by the River Calder on the eastern edge of the Pennines, the urban area is and had a population of 76,886 in 2001....
, Lewes Castle
Lewes Castle
Lewes Castle stands at the highest point of Lewes, East Sussex, England on an artificial mound constructed with chalk blocks. It was originally called Bray Castle.-History:...
in Sussex
Sussex
Sussex , from the Old English Sūþsēaxe , is an historic county in South East England corresponding roughly in area to the ancient Kingdom of Sussex. It is bounded on the north by Surrey, east by Kent, south by the English Channel, and west by Hampshire, and is divided for local government into West...
, and Reigate Castle
Reigate Castle
Reigate castle is a ruined castle in the market town of Reigate in the county of Surrey, England.-Establishment:King William I granted the land around Reigate to one of his supporters, William de Warenne, who was created Earl of Surrey in 1088...
in Surrey
Surrey
Surrey is a county in the South East of England and is one of the Home Counties. The county borders Greater London, Kent, East Sussex, West Sussex, Hampshire and Berkshire. The historic county town is Guildford. Surrey County Council sits at Kingston upon Thames, although this has been part of...
, as well as a keep on their lands at Mortemer in Normandy
Normandy
Normandy is a geographical region corresponding to the former Duchy of Normandy. It is in France.The continental territory covers 30,627 km² and forms the preponderant part of Normandy and roughly 5% of the territory of France. It is divided for administrative purposes into two régions:...
. The Yorkshire lands ceded to The Crown
The Crown
The Crown is a corporation sole that in the Commonwealth realms and any provincial or state sub-divisions thereof represents the legal embodiment of governance, whether executive, legislative, or judicial...
on the death without issue of John de Warenne, 7th Earl of Surrey
John de Warenne, 7th Earl of Surrey
John de Warenne, 6th Earl of Surrey was a prominent English nobleman and military commander during the reigns of Henry III of England and Edward I of England. During the Second Barons' War he switched sides twice, ending up in support of the king, for whose capture he was present at Lewes in 1264...
in 1347.

After Conisbrough reverted to the Crown, Edward III gave it to his youngest son Edmund Langley and was probably during his tenure that the work to improve the accommodation in the inner ward was carried out. Langley died in 1402 and the castle was inherited by his eldest son Edward, 2nd Duke of Albemarle
Edward of Norwich, 2nd Duke of York
Sir Edward of Norwich, 2nd Duke of York, 2nd Earl of Cambridge, Earl of Rutland, Earl of Cork, Duke of Aumale KG was a member of the English royal family who died at the Battle of Agincourt....
. Albemarle (by then Duke of York) was slain at the Battle of Agincourt
Battle of Agincourt
The Battle of Agincourt was a major English victory against a numerically superior French army in the Hundred Years' War. The battle occurred on Friday, 25 October 1415 , near modern-day Azincourt, in northern France...
in 1415. His widow Maud resided in the castle until her death in 1446 when it passed to Richard, 3rd Duke of York
Richard Plantagenet, 3rd Duke of York
Richard Plantagenêt, 3rd Duke of York, 6th Earl of March, 4th Earl of Cambridge, and 7th Earl of Ulster, conventionally called Richard of York was a leading English magnate, great-grandson of King Edward III...
who was killed at the Battle of Wakefield
Battle of Wakefield
The Battle of Wakefield took place at Sandal Magna near Wakefield, in West Yorkshire in Northern England, on 30 December 1460. It was a major battle of the Wars of the Roses...
in 1460. His son Edward, Earl of March
Earl of March
The title The Earl of March has been created several times in the Peerage of Scotland and the Peerage of England. The title derived from the "marches" or boundaries between England and either Wales or Scotland , and was held by several great feudal families which owned lands in those border...
continued the war emerging victorious and was crowned King Edward IV
Edward IV of England
Edward IV was King of England from 4 March 1461 until 3 October 1470, and again from 11 April 1471 until his death. He was the first Yorkist King of England...
. Because Edward won the war the castle was not confiscated as would usually have happened when a magnate rebelled against the crown and lost. In this case the castle was inherited by Edward and became Crown property when he ascended to the throne.

By the reign of Henry VIII
Henry VIII of England
Henry VIII was King of England from 21 April 1509 until his death. He was Lord, and later King, of Ireland, as well as continuing the nominal claim by the English monarchs to the Kingdom of France...
the castle was in a dilapidated state. In the 1537–38 a survey by Royal Commissioners found that the castle was already a ruin and from the description of the survey most of the damage seen today had already occurred.

It is because it was a ruin by the 17th century, the collapsed gatehouse and parts of the curtain wall
Curtain wall
A curtain wall is an outer covering of a building in which the outer walls are non-structural, but merely keep out the weather. As the curtain wall is non-structural it can be made of a lightweight material reducing construction costs. When glass is used as the curtain wall, a great advantage is...
made the castle indefensible. This meant that no further damage was done to the fabric of the castle during the English Civil War
English Civil War
The English Civil War was a series of armed conflicts and political machinations between Parliamentarians and Royalists...
, that caused so much damage to many old fortifications either through bombardment or slighting
Slighting
A slighting is the deliberate destruction, partial or complete, of a fortification without opposition. During the English Civil War this was to render it unusable as a fort.-Middle Ages:...
, and so, along with sympathetic ownership, the keep survived as a ruin, but largely intact, down to the 21st century.

The name Conisbrough is derived from the Old English
Old English language
Old English or Anglo-Saxon is an early form of the English language that was spoken and written by the Anglo-Saxons and their descendants in parts of what are now England and southeastern Scotland between at least the mid-5th century and the mid-12th century...
Cyningesburh - meaning 'the defended burh of the King', suggesting the area once belonged to one of English kings, prior to the Norman Conquest. At the time of the Norman Conquest the manor of Conisbrough was held by King Harold
Harold Godwinson
Harold Godwinson was the last Anglo-Saxon King of England.It could be argued that Edgar the Atheling, who was proclaimed as king by the witan but never crowned, was really the last Anglo-Saxon king...
- he was defeated at the Battle of Hastings
Battle of Hastings
The Battle of Hastings occurred on 14 October 1066 during the Norman conquest of England, between the Norman-French army of Duke William II of Normandy and the English army under King Harold II...
. Earlier documents dated at c. 1000–1004 show lands in this area known as Kyningesburg were granted by Wulfric
Wulfric
Wulfric is an Anglo-Saxon male name, meaning "wolf power" or "wolf ruler".-Historical mentions:*Wulfric Spot, Earl of Mercia and Chief Councillor of State to King Ethelred; b., d. 12 October 1010. Founder of Burton Abbey, to which he bequeathed land and money in his will of c. 1002-4 .*Wulfric of...
, one of King Edward's ministers, to Elfhei, another Saxon nobleman.

In Sir Walter Scott's novel, Ivanhoe
Ivanhoe
Ivanhoe is a historical fiction novel by Sir Walter Scott in 1819, and set in 12th-century England. Ivanhoe is sometimes credited for increasing interest in Romanticism and Medievalism; John Henry Newman claimed Scott "had first turned men's minds in the direction of the middle ages," while...
, 'Coningsburgh Castle' is based on Conisbrough. Scott's Coningsburgh is a Saxon fortress, based on the mistaken conclusion by him that its unique style marked its keep as a non-Norman. In the notes that accompany the novel, Scott acknowledges that the outer works were Norman but speculates that the keep—which he describes in some detail in the novel (but which in the notes he says he only viewed hastily)—was similar to Scottish mainland and island Broch
Broch
A broch is an Iron Age drystone hollow-walled structure of a type found only in Scotland. Brochs include some of the most sophisticated examples of drystone architecture ever created, and belong to the classification "complex Atlantic Roundhouse" devised by Scottish archaeologists in the 1980s....
s in particular Broch of Mousa in the Shetlands, and hence in Scott's mind, if the castles of the Scottish islands were Scandinavian in origin, then so too could Conisbrough have been a pre-Norman castle built by Scandinavians or Saxons with knowledge of similar Scottish structures. A Victorian romantic vista since shown not to be so.