Hello have a nice day! :) my question is if their will be a constitutional amendment, how much is the possible amount of money will spend for it? ...
More 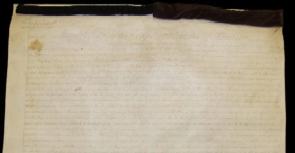 The Congress shall have power -
1. To lay and collect taxes, duties, imposts, and excises for revenue, necessary to pay the debts, provide for the common defense, and carry on the Government of the Confederate States; but no bounties shall be granted from the Treasury; nor shall any duties or taxes on importations from foreign nations be laid to promote or foster any branch of industry; and all duties, imposts, and excises shall be uniform throughout the Confederate States.

Notice the break in the confederate constitution's first power of congress which leaves no doubt that Congress only has power to levy taxes for the following powers and not just for anything at all that is in the common defense or general welfare. The phrase "to promote or foster any branch of industry" was added to the "tax uniformity clause" in Article I, Section 8(1) to stress the opposition of the Confederacy to non-uniform tariffs such as the Tariff of 1828
Tariff of 1828
The Tariff of 1828 was a protective tariff passed by the Congress of the United States on May 19, 1828, designed to protect industry in the northern United States...
, also known as the Tariff of Abominations.

3. To regulate commerce with foreign nations, and among the several States, and with the Indian tribes; but neither this, nor any other clause contained in the Constitution, shall ever be construed to delegate the power to Congress to appropriate money for any internal improvement intended to facilitate commerce; except for the purpose of furnishing lights, beacons, and buoys, and other aids to navigation upon the coasts, and the improvement of harbors and the removing of obstructions in river navigation; in all which cases such duties shall be laid on the navigation facilitated thereby as may be necessary to pay the costs and expenses thereof.

Such a provision minimizes the chance of logrolling
Logrolling
Logrolling is the trading of favors, or quid pro quo, such as vote trading by legislative members to obtain passage of actions of interest to each legislative member...
, which is the practice of including multiple subjects in the same bill, hoping to attract supporters who might not vote for one or more subjects if presented separately.

Whereas the original constitution did not even use the word slavery, but "Person[s] held to Service or Labour" which included whites in indentured servitude, the confederate constitution addresses the legality of slavery directly and by name.

No bill of attainder
Bill of attainder
A bill of attainder is an act of a legislature declaring a person or group of persons guilty of some crime and punishing them without benefit of a judicial trial.-English law:...
, ex post facto law, or law denying or impairing the right of property in negro slaves shall be passed [by Congress]

The constitution likewise prohibited the Confederate Congress from abolishing or limiting slavery in Confederate territories (unlike the United States, where, prior to the Dred Scott decision
Dred Scott v. Sandford
Dred Scott v. Sandford, , also known as the Dred Scott Decision, was a ruling by the U.S. Supreme Court that people of African descent brought into the United States and held as slaves were not protected by the Constitution and could never be U.S...
, Congress had prohibited slavery in some territories). This did not necessarily mean that individual states could not ban slavery. However, section 2 of Article IV specified that "citizens of each State shall be entitled to all the privileges and immunities of citizens in the several States; and shall have the right of transit and sojourn in any State of this Confederacy, with their slaves and other property; and the right of property in said slaves shall not be thereby impaired".

A proposal to prohibit free states from joining the Confederate States of America was narrowly defeated, largely due to the efforts of moderates such as Alexander Stephens
Alexander Stephens
Alexander Hamilton Stephens was an American politician from Georgia. He was Vice President of the Confederate States of America during the American Civil War. He also served as a U.S...
. Stephens believed that economics might persuade free states with strong economic ties to the South to join the Confederacy.

The constitution contained many of the phrases and clauses which had led to disagreement among the states in the original Union, including a Supremacy Clause
Supremacy Clause
Article VI, Clause 2 of the United States Constitution, known as the Supremacy Clause, establishes the U.S. Constitution, U.S. Treaties, and Federal Statutes as "the supreme law of the land." The text decrees these to be the highest form of law in the U.S...
, a Commerce Clause
Commerce Clause
The Commerce Clause is an enumerated power listed in the United States Constitution . The clause states that the United States Congress shall have power "To regulate Commerce with foreign Nations, and among the several States, and with the Indian Tribes." Courts and commentators have tended to...
(albeit a more restrained version than in the U.S. Constitution, which itself had not been construed nearly as broadly as it is today), and a Necessary and Proper Clause. The Confederate Congress had powers almost identical to the US Congress; however, all the minor differences added together amounted to a much more constrained federal government than the US government of the times and of today. The Confederate Constitution contained clauses which increased the powers of the Executive Branch, such as the line item veto power given to the president. However, they also granted essentially a line item veto to the Senate and Congress by limiting each bill to one issue written in the name. By making both the executive and legislative branches of government more powerful they did more to tie the hands of the Federal government overall—enhancing the planned ineffectiveness of the central government. The Confederate Constitution also provided for a Supreme Court, which, through the supremacy clause, could acquire all the powers claimed for the U.S. Supreme Court by John Marshall
John Marshall
John Marshall was the Chief Justice of the United States whose court opinions helped lay the basis for American constitutional law and made the Supreme Court of the United States a coequal branch of government along with the legislative and executive branches...
. The Confederate Constitution was to take effect upon ratification by five states, like the U.S. Constitution, which took effect after nine states ratified it. This had been a major point of contention in the Anti-Federalist Papers
Anti-Federalist Papers
The Anti-Federalist Papers are a collection of articles, written in opposition to the ratification of the 1787 United States Constitution. Unlike the Federalist Papers written in support of the Constitution, the authors of these articles, mostly operating under pen names, were not engaged in a...
. The framers of the Confederate Constitution, having studied the various constitutional crises
Constitutional crisis
A constitutional crisis is a situation that the legal system's constitution or other basic principles of operation appear unable to resolve; it often results in a breakdown in the orderly operation of government...
which had arisen in the United States between 1787 and 1860, tried to revise the constitution to eliminate the grievances which had been raised in that period.

The signatories of the constitution were: